(The Arsenal Perspective by @JamrockRover)

With the great Champions League escape act pulled off in midweek it’s back to Premier League action for Arsenal today with a trip to the Premier League’s basement club Aston Villa. The game will give Arsenal an opportunity to go to the top of the table with the only team ahead of them not playing until Monday night when Leicester face Chelsea. Arsenal have a home game against City next week and it would be great for them to go into that game at the summit.

The season is nearly halfway completed and so far from what I’ve seen there’s nothing for Arsenal to fear and no reason (injuries excepted) that they can’t win the league. The other two teams they have yet to play are Southampton and Bournemouth and those teams have both looked good at times, but they’re certainly well beatable. The Bournemouth victories over Chelsea and United in the last week were great, but I think an in form Arsenal should be ideally suited to play them.

Of course Arsenal haven’t exactly been in form in the league and the win at home to Sunderland was the first win in four games. Such is the openness of the league that those dropped points haven’t seen Arsenal drop off the pace or lose ground on the other contenders. They did mean they lost the chance to go clear at the top of the table though.

If their league form hasn’t been great the midweek win away to Olympiacos was exactly that and it shows the team have plenty to offer despite the spate of injuries. The only players due back to the squad this side of Christmas are Alexis Sanchez and Mikel Arreta and the players who were available on Wednesday night will have to do the job again. There might be some slight changes to the team that beat Olympiacos so convincingly, but I wouldn’t expect too many.

I wouldn’t be too surprised if Theo Walcott was rested after starting his first game since his most recent injury on Wednesday night. With so many other players injured we need to be careful with players like Walcott who are fairly injury prone. If he is rested the obvious replacement is Alex Oxlade-Chamberlain who is only just back from injury himself and there’s always the option of Walcott from the bench if he’s needed. 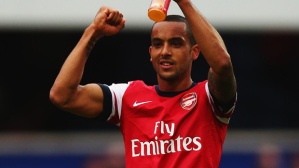 Villa are rooted to the foot of the table without a win since the opening day of the season and they’re the only team not to have won a home game yet. They have to be favourites for the drop at this stage and the arrival of Remi Garde doesn’t seem to have changed their fortunes. In their first game under him they did manage a scoreless draw at home to City though and they will probably look to put in a similar performance today.

I know they need wins to try to climb the table, but a draw with Arsenal would be a very good result for a team in their position. Arsenal have a fantastic record away to Villa in the league and have not lost away to them since this very day in 1998. While there may be some sympathy for ex Arsenal player Garde among the Arsenal faithful it certainly won’t extend to wanting him to get anything out of this game.

The few times I’ve seen Villa this season they have been poor and their league position is a reflection of exactly how poor they have been. Arsenal have to be full of confidence after Wednesday night and they need to continue on in that vein. They can put the Champions League out of their minds for a few months now and concentrate on what has to be their main priority this season.

As I’ve said already the league is there to be won and it’s time for Arsenal to step up and show their credentials. A comprehensive win ahead of the home game with City would be ideal and it would be perfect for them to go into that game ahead of City. There is no doubting the calibre of players City have, but they have been far from impressive quite often this season.

Arsenal have a very good record away from home so far this season and they have actually taken more points and scored more goals on the road than they have at home. The Mesut Ozil and Oivier Giroud combination continues to flourish even if Guroud doesn’t have the pace to get on his through passes. He does however have the knack of getting on the end of Ozil’s excellent set piece delivery and that combination has been very important for Arsenal.

Aaron Ramsey has also got the chance to play centrally in the absence of the injured Santi Cazorla and he looks like he could bag a lot of goals in that position. He certainly gets into great positions and I think the goals might just start to flow for him after the one he scrambled home last week. When players are injured it inevitably gives others a chance to shine and he might just do so in the position he ultimately wants to play in.

Another player who looks like he could be taking advantage of others misfortunes is Joel Campbell. I have been far from convinced by him, but he is growing into the team and it looks like the game time afforded to him out of need is benefiting him greatly. If he continues to progress he might just cement a permanent place in the squad.

I think the players have to be on a high after Wednesday night and they need to carry it into today. Villa are low on confidence and there for the beating and I think they will go out there and beat them. They have given them hidings the last few times they have played and another one ahead of City next week would be ideal.