← FY Top 5 For GW6: Including Everton’s Bolt From A Blue!
Manchester United’s Falcao And The 5 #FPL Players You MUST Pick This Week →

How guaranteed a game after Ben Davies moved to Tottenham, fellow Welshman Neil Taylor has played the full 90 minutes in all of Swansea’s last five Premier League games – helping them keep clean sheets in three of them.

Taylor also has assist to his name this season, and with the Swans playing at home to a troubled and misfiring Newcastle at the weekend then he’ll fancy his chances of more points.

Discussion of Steven Gerrard’s form might be a worldwide debate at the moment, but there is merit in considering the Liverpool midfielder for your team at the moment despite his withdrawn position in midfield.

With the similarly-priced Aaron Ramsey now injured, Joe Allen and Emre Can both still out for Liverpool and some kinder fixtures on the horizon for the Reds, Gerrard’s potent threat from set-pieces could prove to be telling.

With just 5.4% ownership he came close to scraping it into our ‘Outsider’ category this week, but he could be a useful addition.

Wayne Rooney’s suspension should allow Manchester United’s burgeoning Radamel Falcao-Robin van Persie partnership some extra room to shine against Everton, where the former could fire his first goal for his new club after a start which has consisted of two assists so far.

With Rooney missing for the whole of October there will be plenty of fuel to heap on the fire for those who believe United are better off without him, and Falcao is likely to be a key player in that new approach.

He should be backed to get off the mark this weekend.

Two goals in three starts and the confirmation that he’s on penalty duty hasn’t been enough to get Hull’s new Uruguayan forward Abel Hernandez above a 0.3% ownership rate at the time of writing, which is somewhat surprising.

As we know from last season, Uruguayan forwards have a habit of performing well in Fantasy Premier League, and although no-one is suggesting Hernandez will reach super-human Luis Suarez levels, he could be worth a punt at home to Palace.

This bit is getting predictable, isn’t it?

Never mind that its Arsenal and never mind that there’ll probably be the weekly debate over his fitness, you simply can’t afford not to give him the armband. 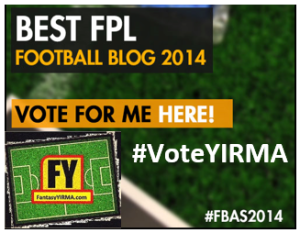 ← FY Top 5 For GW6: Including Everton’s Bolt From A Blue!
Manchester United’s Falcao And The 5 #FPL Players You MUST Pick This Week →