I was asked about Fantasy Football recently and the question posed made me think!

“Why do you bother with Fantasy Football – I mean what’s the point ??”

So in light of this I’ve written a post to try and answer that very question.

First published in 2015 by Ryan @FantasyYIRMA

Last week I was asked about the website FantasyYIRMA. “What the hell does it mean?” is typically the first question I get (About Us) and after I had spent a few moments explaining what the site was and the drunken back story, came the more difficult question to answer, which is effectively:

It’s a question I am asked repeatedly on a Saturday afternoon, typically when the Mrs wants to go to B&Q and I explain that I’d rather watch Soccer Saturday to find out if a defender from a team I don’t support keeps a clean sheet away from home. It’s a difficult paradigm to explain because in all honesty I ask myself the same question at times.

The increase in interest in Fantasy Football in recent years has been immense. Even if we look at the playing figures for just the official Premier League game in recent years – a record 3.2m people played the game in the 2013-14 season, up a substantial 28% on the previous 2.5m in 2012-13.

So, perhaps it’s because my four appearances for the local U16 team during my youth didn’t quite satisfy my urge to prove myself on the global stage as the next George Best. Perhaps it’s the involvement and interaction the game provides. Perhaps it’s both in my case, it’s hard to say.

I’ve played the game in some form or another for well over a decade. I remember writing out lists of potential players, agonising over player selection and posting off my team only to forget about it a month later. I think the historical mainstream approach has been to get excited in July/August only for the appeal to die down as the season progresses.

That will always be the case for some people and fair enough, however the landscape is different now. There are multiple sites catering for fantasy fans providing regular information with previews, tips and discussion forums to chat with people from across the world on why Hull’s Andrew Robertson could average more points per game than Man Utd’s Luke Shaw (and other First World problems).

The growth in online popularity has changed the game for the better. Social media and the interaction afforded from Twitter and Facebook means that the competitive element of the game never loses its focus. Mini-Leagues keep their edge so in addition to your office mini-league becoming more competitive, you can be now part of something on a global scale. The FY mini-league has around 4,500 players this season however I remember when it was still 20 folk and I enjoyed it just as much. Therein lies part of the beauty. The competitive buzz of beating your mate or climbing the league is infectious.

In 2009/10 it was Chelsea who won the Premier League trophy but from a Fantasy perspective I’ll remember that season for a long time.

I was in Leamington Spa catching up with friends and watching Manchester United vs Hull, and the lasting memory of that game is standing behind the bar, half intoxicated and using the Pub landlord’s laptop to win a £10 bet with a mate that with Rooney as my captain his four goals would push me above 140 points for the Gameweek.

The final day of that same season saw Chelsea play Wigan at Stamford Bridge. The mini-league had a good few playing in those days but by GW38 it was down to the grudge match between me and my main rival “Jack N. Hoff” for first place. I’d like to say team names have improved over the years – but they haven’t!

He had a 6 point lead and Frank Lampard, I had Didier Drogba as captain, and by half-time it was 2-0 Chelsea including a Lampard penalty. By this stage the text messages where flying and the “friendly” abuse was in full flow. I distinctly remember saying to my mate that I pretty much needed a Drogba hat-trick in the last 45 minutes to stand any chance – if I’m honest, I don’t think either of us thought that would happen.

Then… that happened exactly.

“The second half was exhibition stuff with Salomon Kalou and Anelka on target again before Didier Drogba added the Golden Boot to Chelsea’s title with a rapid-fire hat-trick to take his total to 29 in the league this term. Ashley Cole’s crisp strike for number eight on the stroke of full-time provided a fitting finale.” BBC Sport archive

Even Ashley Cole scored that day…a great defender but by no means a prolific goal scorer averaging one goal every 70 games for Chelsea.

And with that the fantasy mini-league celebrations ensued… I may even have bought a round that day – who knows, it’s a bit of a blur in all honesty!!

There are loads of stories like this and everyone has one, whether it’s the player they left on the bench or the captain that they swear blind they clicked save on, to the head-to-head victories and narrow mini-league defeats.

People can relate, discuss, share their own experiences and most importantly get involved.

Watching Match of the Day during Gameweek 4 of this season saw another Chelsea player score a hat-trick, with Diego Costa making a barnstorming impact on the Premier League already. The three goals he scored against Swansea were impressive but it was the commentary from the legend John Motson that will stay with me…

“Those people who put him in their Fantasy league team must be well pleased.”

This for me highlights the increase in Fantasy Football popularity and I think that sums up the original question perfectly.

That feel-good factor… that buzz… that excitement…that’s “Why”

For his sins, Founder of FantasyYIRMA.com 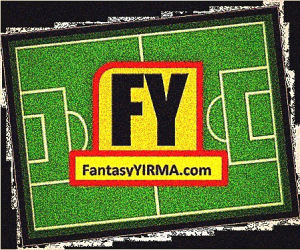 FantasyYIRMA.com established in 2012, is a niche Fantasy Football site focused on providing news, views and insight for the English Premier League. Solid gameweek articles and Club features in addition to a top ranked free to play mini-league makes #FY a must read Fantasy source!