← Leicester’s Jaime Vardy stole my penalty – AND I WANT IT BACK!!
Arsenal’s Mesut Ozil and Eastenders’ Martin Fowler? →

After an International break that seemed to last longer than a Trebor mint, it’s time to get back down to the nitty gritty of FPL. A lot has changed since the last time we came back from England duty. John Walters has practically been knighted, Zlatan ‘retired’ the entire nation of Denmark and Scotland….ok some things haven’t changed. One big change in the Premier League is the injury to Dimitri Payet. “Woah there Martin Fowler” I hear you say, Payet is a midfielder, this is the defender section! Calm down sensible Susan I know, I know. A month back I would have picked out Spurs away as yet another scalp on the road for Slaven Bilic and his merry men but without Payet, it doesn’t seem so certain and neither does West Ham’s form in general. With that in mind, I think Spurs might keep a clean sheet with the Hammers missing their top performer so far. England International Eric Dier, therefore seems a solid pick. Playing in midfield, he offers a remote chance of points further up the pitch but will also cash a nice 6 points if Spurs hold out.

Ed: Martin Fowler is a fictional character from long running UK soap Eastenders. I feel it important to point this out for the one guy who visits the site each month from Yemen and may not realise this. Also I fear that not clarifying this point may lead to tweets asking me “Should I put Martin Fowler in my FPL team”

I need you to sit down, put your coffee on the table and call your Mum and tell her you love her. I am picking a second Spurs player. I told you to pick Dele Alli weeks ago. 0.6% of you listened. I am going to tell you again. Pick Dele Alli!! He’s an England International midfielder, for a top 10 club, 4.9m and only 1.5% picked! Not only should you be picking him, you should be starting him, following him on twitter and questioning the ethics of cloning him! He’s just started to get the confidence to burst forward and grab goals, as he did at MK Dons and I am almost certain in 4 weeks he will be at least 10% picked. Get on board now.

Ed: Turn the sound on for this vine – well worth it

Villa, Bournemouth, Palace, Norwich, Leicester, Newcastle, Stoke. No, I am not listing Jack grealish’s inevitable career path but in fact Everton’s next seven games, before a home game to Spurs. Now, these hardly represent easy matches. Stoke have been excellent, Leicester dangerous and Newcastle….well no Newcastle are still shit but the point is Everton have a very clear path without facing one of the ‘bigger’ sides. One of their players that could walk into those ‘big’ sides is Romelu Lukaku, who must be getting together for weekly dinners with Eva Carneiro and AVB to piss himself laughing at Chelsea. He is 30% picked and the 2nd top scorer in the game, so it’s hardly a big shout but with that run of games, he really should be in your squad.

It’s getting a bit boring but Mesut Ozil is being heralded as the assist king for good reason. I think Arsenal will turn over West Brom quite comfortably after being second best in the North London Derby. If they want to seriously contend for the title this year, they need to make light work of teams like West Brom and I think Ozil will be around the 8 point mark once again.

Once you’ve googled him, come back to me and start to laugh or throw insults as you so wish. There’s logic to the madness. There’s every chance he won’t play a single minute and this would be a terrible call. However, Aguero and now Bony are both looking unlikely to play for City this coming week. Bony is 75%  fit by FPL measures but should he not play, Kelechi is left as the only City striker available. Surely he would get some decent gametime then and at only 0.1% picked then he would be a huge huge coup of he got on the scoresheet. I wouldn’t be rushing to bring him in but if you are looking for a Hail Mary then why the hell not? 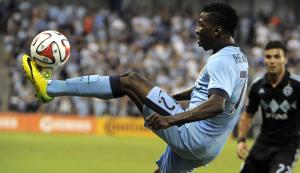 ← Leicester’s Jaime Vardy stole my penalty – AND I WANT IT BACK!!
Arsenal’s Mesut Ozil and Eastenders’ Martin Fowler? →