← Everton’s Romelu Lukaku made my Monday Blue in a good way!
Everton, Arsenal or Spurs for Captaincy Selection Dilemma? →

Swansea sack Monk and we pick Watford and Bournemouth players

If you followed my tip two weeks ago, you will have brought in Glen Johnson and been rewarded with a clean sheet against City. You’re welcome. If you followed my tip last week, you will have brought in Martin Skrtel and been rewarded with an own goal and a 2-0 loss. You’re still welcome. This week I am taking a slight risk and suggesting defenders from a team who have lost their lynchpin at the back, in Vincent Kompany. There’s no doubt that City aren’t the same team without Kompany but they have a home tie against a Swansea who have only scored 3 goals in 6 games (2 against Bournemouth & 1 against Villa). I’m not suggesting that City will turn over Swansea. In fact I wouldn’t be surprised by a scrappy 1-0 but Swansea are in serious trouble up front and I can’t see this being the game that saves Monk’s bacon.With that in mind you could opt for the goal threat of Kolarov (6.4m) to the slightly more affordable Sagna (5.5m) who could occupy his early season slot as an FPL favourite.

It has been a tricky year finding consistency outside of Messrs Ozil and Mahrez this year, with Barkley being a more recent pretender to the crown. It is easy to have your head turned by standout performances by Arnautovic and Wijnaldum but there’s no guarantee they will replicate last week’s heroics. One of the trickiest things to do in #FPL is timing when to bring in Yannick Bolasie. If you do it at the right time, he will pull of a couple of huge weeks that will find you climbing the table, but he’s also capable of a few 2 point weeks on the trot. With Southampton looking less than invincible and Palace stringing together impressive results, I think now is as good a time as any to have a punt on Bolasie and cause a “Yannick Panic” among your friends and colleagues. Now, did I only pick him for some rhyming wordplay? Maybe I did, maybe I didn’t. That’s for God to judge.

Like a stalker at a cashpoint, Troy Deeney has snuck up on many of us without us knowing. He is currently the 4th top scoring striker in FPL, under 5% picked and 0.7m cheaper than his strike partner Ighalo at 5.2m. He is currently the 3rd most in form player in the game and has bagged 5 in 6 goals. I tipped him as an outsider a few weeks ago but I think he’s ready for the big show. As Watford’s penalty taker and captain he is guaranteed gametime and I wouldn’t be surprised if he overtakes his partner in crime within the next couple of months. Watford are similarly stealth like in their assault up the league and sit in an impressive 10th place with a winnable game against an admittedly in form Sunderland. There could be an argument for having both of them but if you’re looking for a differential, look no further than Deeney.

The likes of Silva and KDB are tempting but I am going to go for the deadliest man in the Premiership lately. Not Jamie Vardy, but Romelu Lukaku. He is 5 in 5 and you can get 100/1 on him equalling Party Hardy Vardy’s goalscoring record which I genuinely think is decent value. It’s a horrible feeling watching your captain playing in the early kick off and for that reason Ozil is tempting but I can’t see past big Romelu for the armband.

Now this outside call really is mental but before you put tinfoil on your head and alien proof your bedroom, hear me out. Junior Stanislas not only sounds like a viable claim for the Iron Throne but has also notched 21 points in his last 3 games, which included matches against Everton and Chelsea. Bournemouth face Man United at home and I don’t see any reason they won’t win. He’s finding the pace of the Premiership and settling in quickly and is only 0.5% picked. Add to that he is an astonishing 4.2m. If you don’t have a Dele Alli in your squad as that wildcard type sub then Junior could be your man. Winter is coming 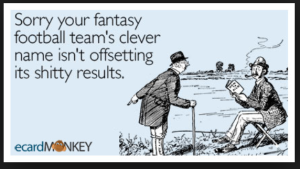 ← Everton’s Romelu Lukaku made my Monday Blue in a good way!
Everton, Arsenal or Spurs for Captaincy Selection Dilemma? →