← Arsenal vs Chelsea: Confirmed Lineups
Aguero to Arsenal to Allardyce: The Gameweek Review →

Unless you’re currently residing under a rock or on another planet (in which case well done on getting access to the interweb), you’ll know that today Sam Allardyce is being summoned to FA Headquarters by his bosses who are more than a little peeved at him.

‘Big Sam’ (for that is his official name on his passport, or so I’m told) had dinner with some ‘business people’ and during a lengthy discussion over what I presume was foie gras smothered in gravy and three pints of creme de menthe, he discussed many topics in a very open and frank manner which reflect quite badly on his employers – their decision making, their rules (and how to get around them), their business nous and their previous employees, among other things.

Today he looks like he is at best facing a severe dressing down (the thought of Big Sam dressing down makes me shudder), and at worst the sack, the bullet, the chop, the P45, the axe…you get my drift.

My Twitter timeline is now festooned with articles by some of the most senior football writers in the UK arguing furiously as to why ‘Big Sam’ doesn’t deserve the sack, and how what he did was nothing more than foolish and possibly indiscreet. Essentially the contacts and journos that ‘Big Sam’ has fed with material for the best part of 20 years are now trying to ride to his rescue, and in some ways that’s understandable. Finally the football journalists have someone in the top job who gives great copy and who almost certainly has all of their numbers in his phone, just in case. *ahem*

‘Big Sam’ is a man who has opened his gob and said something daft more times than Sideshow Bob has trodden on a rake. He has become a figure of national amusement with his proclamations that he would be managing Real Madrid had he not been ‘Northern’. His dancing to Rihanna only last summer became a viral sensation – the ultimate example of ‘Dad Dancing’ meets ‘Football Man On The Piss’. At the time, he was just ‘Big Sam’ on his holidays, but very soon he was ‘England Manager’ on his holidays. Should that make a difference? Of course not. It looked daft then, it looks daft now, whether he’s a 61 year old brickie dancing, or a 61 year old England manager. But Sam doesn’t care that it looked daft, because Sam is Sam, and he’s comfortable with Sam. He likes Sam. Hell, he ADORES Sam.

Sam Allardyce has never been afraid to speak his mind, to be himself, and to let it all hang out (I apologise for the mental image), and you know what? Good on ‘im. As William Shakespeare once opined

‘To thine own self be true, and it must follow, as the night the day, thou canst not then be false to any man’.

Now I think this may be the first time in the history of civilisation that Shakespeare and Sam Allardyce have been mentioned in the same breath (examples of other times are eagerly anticipated), but the point remains true. At that dinner, Sam Allardyce was being Sam Allardyce. ‘Big Sam’ was being ‘Big Sam’. Yet now the FA are ‘disturbed’ and ‘outraged’?

It’s like somebody spending a fortune on a top of the range Alfa Romeo because it looks so beautiful that you bite on your own lip to try and stop yourself screaming out with desire, and then standing aghast at the side of the road as it breaks down. OF COURSE IT BROKE DOWN, IT’S A BLOODY ALFA ROMEO.

How then the FA can act all high and mighty as their England manager acts exactly like himself is beyond me. Of course they will, though. There will be condemnation of his lack of self-awareness, his lack of control, his greed etc etc etc. In keeping with the theme of England managers, and without wanting to come across all Kevin Keegan, I would love it, absolutely bloody love it, if ‘Big Sam’ swaggered into that meeting, chewing gum, hand in his pocket clearly ‘adjusting’ himself, and told them to back him or sack him. They will never crack him. In reality however ‘Big Sam’ will do all he can to keep his dream job and will suddenly become ‘Little Sam’, all contrite and apologetic, gazing up to his FA superiors with big brown eyes, begging for forgiveness. 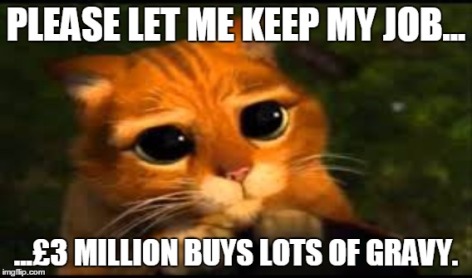 In the end, I can’t help but wonder if this sorry episode may only hasten the inevitable demise of ‘Big Sam’ as England manager. Instead of being hounded out of the job due to drab, soulless football and/or terrible results, he could be ushered out of the side door of the FA Headquarters because of his big mouth. The same big mouth the FA stuffed £3 million quid a year inside a few short weeks ago.

Hypocrisy or Bad Judgement? You decide

← Arsenal vs Chelsea: Confirmed Lineups
Aguero to Arsenal to Allardyce: The Gameweek Review →