This is a follow up to an original article evaluating the current BPS for the Official Fantasy Premier League game produced and published in February 2017. A massive thank you to Richard Kenny for the time and effort that went into this. I think we can all agree that it is a tough ask to have a BPS in place that is perfect – this is a great initiative undertaken to look at how the existing system could be improved. Delighted to host the article on FantasyYIRMA.com and best of luck to everyone for Gameweek38. Ryan. @FantasyYIRMA

Earlier in the season I wrote an article about to the BPS system.  In the article I proposed some changes to the current system. This article was well received and I now want to analyse a couple of controversial games and apply the Alternative BPS system, to see if the bonus points would have been awarded differently.

Firstly, a reminder of the alternative BPS system I proposed.

The merits the Alternative BPS system, would have over the current one are as follows:

The original article had a reward for successful free kicks. However, this has been removed as I cannot find any Opta data for this action. Also, it contained BPS points for goals that took the lead and for equalising goals. I have taken these out for now as they may not be necessary.

This was the game that inspired me to look at the BPS system in the first place.

The main contentious point about this game was Monreal, a defender in a team which conceded three goals was awarded 2 bonus points. At the same time Costa provided two assists and was not awarded any bonus points. The original article showed Costa was not awarded assist BPS as Opta did not consider his goal involvement to be assists, unlike the FPL game. This is why he was not in contention to receive bonus points

How would the proposed alternative BPS system affect the award of bonus points? The table below compares the current system with the alternative system. Note, the new actions are highlighted in red. 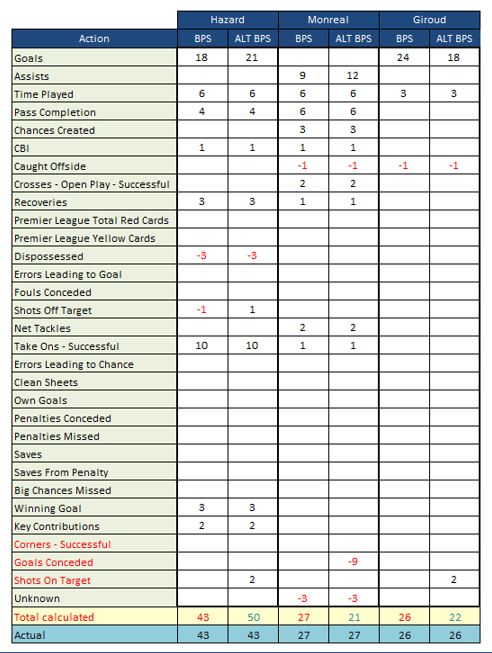 Hazards extra BPS would be because the alternative system awards 3 more BPS for a midfielder scoring a goal. Instead of punishing him for his one shot off target he would be rewarded for it. Finally, his two shots on target would be rewarded rather than ignored.

For Monreal, there is an unknown action in the calculated BPS. This is because there are some errors with the raw data I use to calculate the BPS. These are around Offside, Key Passes, Tackles and Chances created. To keep the comparison between the BPS systems fair I have used the unknown of -3 in the ALT BPS system.

Moving onto the other actions, he would have 3 extra BPS for the assist and be punished for conceding the three goals.

Giroud would receive less BPS for his goal but have be rewarded for his two shots on target.

The best Chelsea players after Hazard were Fabregas and Pedro. Their BPS comparison table is below.

In the current BPS system did not receive bonus points but if the ALT BPS system was used they would have 26 and 24 BPS. This would put them ahead of both Monreal and Giroud and give them 2 and 1 bonus points each.

Although, Pedro did not score a goal, he was on the pitch longer than Giroud and was very active in the game. He created chances, made tackles and had good pass completion. This highlights one of the main purposes of the BPS system, in that players who generally play well and contribute to their team’s success are rewarded with FPL points. However, the current system did not properly reward Pedro but the alternative system would have rewarded him.

Note, Hazard and Pedro had been substituted when Giroud scored, so they would not be punished for the goal.

In this game the ALT BPS system would better reflect the attacking and defensive performances of each team and award bonus points as follows.

The controversial aspect of this game was that Aguero who scored a goal did not receive any bonus points and Klavan, a defender, who did not keep a clean sheet, was awarded 1 bonus point.

The BPS system comparison table for the players who were awarded bonus points is below. 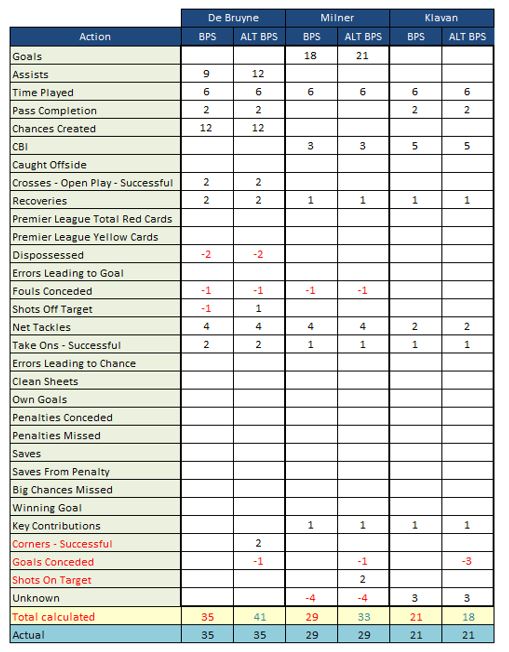 The ALT BPS system would increase KDB’s BPS to 41.  He would get an extra 3 for the assist. His shot off target would be rewarded. His two successful corners would be rewarded and he would be punished for conceding a goal.

Milner’s BPS would increase to 33 with the ALT BPS system. As a midfielder who scored, he would receive extra BPS. He would be punished for conceding but rewarded for 2 shots on target.

Klavan’s BPS would be lower at 18 as he would be punished for conceding a goal.

With the ALT BPS, KDB and Milner would cement their places at the top but would Klavan be displaced from the 1 bonus point position?

After KBD, Otamendi and Aguero were the best MCI players. Their BPS comparison table is below.

It shows that due to being punished for conceding a goal, Otamendi’s BPS would go down to 19. Aguero’s would increase to 22 as his shots, both on and off target, would be rewarded.  This would put him ahead of Klavan and give him 1 bonus point.

The bonus points for this game would be

Applying the alternative bonus point system to these controversial games would make a difference to the allocation of bonus points.

In the Chelsea Arsenal game Monreal who conceded three goals would drop out of the bonus point positions. Giroud who scored a late consolation goal would not receive a bonus point. Fabregas and Pedro who contributed significantly to their team’s success would receive bonus points.

The current BPS system does not need a complete overhaul. With a few minor changes it could be improved and award bonus points more appropriately.

Only two games have been analysed for this article as the process is time consuming.  Actions such as Offside, Key Passes, Big Chances and net Tackles have to be manually checked. However, if anyone has any requests for other games to be analysed then I will be willing to do so.

I have tried to reduce the number of ‘Unknown’ action points but some further work is required to better understand why these errors exist.

FPL manager for 7 seasons and in the last 5 seasons finished in top 5% with a highest rank of 5,934. Writer for various FPL websites. Uses a Moneyball approach to FPL.