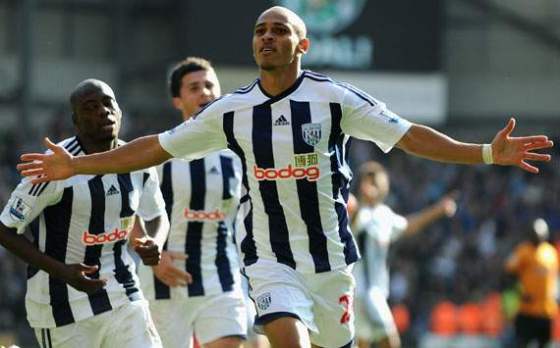 Have you heard the one about the Irishman, the Belgian and the Nigerian? Premier League defences have and they’re growing increasingly sick of it.

It’s no joke that West Bromwich Albion are performing so well in this campaign though, and with early season optimism now giving way to mid-season reality there appears to be a real belief that Shane Long, Romelu Lukaku, Peter Odemwingie and an increasingly impressive supporting cast can fire the Baggies to new heights.

Just how high those highs can get depends on what happens over the next few months of course, but with pre-season hopes of successfully fighting relegation now morphing into desires of a top half finish (even Europe?) then The Hawthorns is fast becoming a good place to be.

Roberto di Matteo will be back there on Saturday 21 months after losing his job as Baggies boss, and whilst his sacking seemed more than a little harsh at the time it is yet further evidence that this is a club who are not afraid to make brave and bold decisions both on and off the pitch.

Behind the scenes, sporting and technical director Dan Ashworth undertakes a role the like of which isn’t all too common in the Premier League, and would become less so at the end of the current season were he not involved in appointing his successor before his heads off to take up a similar role with England.

A former player, Ashworth is a savvy operator who has gone about improving West Brom’s fortunes since being appointed to the role in late 2007. When things looked in danger of unravelling under Di Matteo, Ashworth stepped in and appointed Roy Hodgson to steer the side to mid-table. Eyebrows might have been raised when he chose Steve Clarke as Hodgson’s replacement following his departure for England, but so far so very, very good.

And why shouldn’t it be? Clarke was an experienced player at the top level and has learned his coaching trade under the likes of Jose Mourinho and Kenny Dalglish. That Ashworth and West Brom had the bravery to give him his step up to become a No. 1 is a decision that has so far been richly rewarded.

The likes of Ben Foster, Gareth McAuley, James Morrison, Claudio Yacob and Youssouf Mulumbu have all impressed as the Baggies have picked up six wins in their opening 11 games to sit fifth in the table above fancied teams such as Tottenham and Arsenal, but it is those three attackers mentioned earlier who appear to epitomise everything about this forward thinking club.

Long, Lukaku and Odemwingie have each scored three goals in the league this season, and although when combined that only just puts the three of them ahead of the division’s top scorers Luis Suarez and Robin van Persie – who each have eight apiece – they have been invaluable contributors to a team who appear to fear no-one.

There will of course be tough challenges ahead – not least Chelsea, Arsenal and Manchester United before the turn of the year – but there is nothing to suggest that West Brom should go into any of those games with an inferiority complex. Everton, a club who West Brom are currently on the same points as and beat at The Hawthorns in early September, are often lauded for the workaholic way that they tackle every game, so why not the Baggies too?

As well as hard work, Clarke’s rotation of his three forwards has been key to their success, and there wasn’t a hint of dissent when Odemwingie was dropped to the bench for last weekend’s visit to Wigan just a few days after he’d scored twice against Southampton.

The options will be limited against Chelsea at the weekend due to Lukaku being unable to face his parent club, but Long, Odemwingie and their team-mates will be working as hard as ever to deliver against the European champions.

Clarke will demand nothing less, and’s that’s no joke.