Leicester vs Manchester United and Spurs vs WBA Confirmed Lineups

The Football Blog Awards are back. FantasyYIRMA will be running for the best Fantasy Blog. If you would like to vote please click your preferred option below. Many Thanks, FY 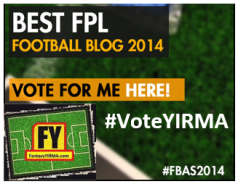 United looked great last week but it was after all against QPR. They will get harder games than that. This is one of them. Leicester have impressed since they came up and striker Leonardo Ullou with three goals has led the line well. United have a lot of good players but they can’t play them all.

The poorest so far has been Robin Van Persie. Mata with eight goals in ten games has been one of their best performers.

Leicester will fight for every battle and contest every tackle. I think they might just be good enough to get a point.

For me the easiest of all the games this weekend to predict. Spurs were all right in Europe. They aren’t a brilliant side but they are better than West Brom.

FantasyYIRMA.com are Running for best #Fantasy Premier League Blog at the upcoming Football Blog awards and we would love your vote.