Forget Arsenal and Chelsea..buy your defenders from Manchester United and City

We were delighted to bring @CraigHazell into the FY team at the start of the season. Drop him a follow on twitter and watch as he prepares for a GW barrage of abuse if it doesn’t go Depay he wants.

Those who tell you statistics aren’t a part of football are either lying to themselves or they just can’t do maths. If you’ve read ‘The Numbers Game’ then you’ll know that they are your only weapon when you are placing bets and that’s what this all is. One big bet. A bet I’m losing if you noticed my twitter bio this last week! That said, you have to look at which sides are producing clean sheets. We are only two games in but there is very little else we have to go on. Both Manchester clubs and Liverpool have managed to go without conceding, with carrying degrees of ease and while City made it look the easiest, it doesn’t necessarily mean they’re the ones to go with.

Vincent Kompany has obviously found his FPL form of old but at 25% picked, you aren’t really gaining anything on a lot of your savvy mates. Liverpool have a tough tie against Arsenal and you wonder if they can keep that run going, and that leaves United as a very attractive prospect when bringing in defenders. Chris Smalling has looked alarmingly good and I have a hunch Darmian could end up a top 10 scorer this season but LUKE SHAW gets my vote for gameweek 3. He is under 10% picked, has played the full 90 in each game, not picked up a booking and is marginally the cheapest of the 3 at 5.6m.

It is already looking like a year when midfielders win you leagues for 2015/2016. While unassuming strikers got you ahead in the game last year, if you can find gems like Redmond or Ayew (both tipped here!) early on then you can really get a jump on those FPL players who only watch ‘the big games’ and say things like ‘too much fannying about at the back. Just kick it.’ One man who doesn’t ‘get stuck in’ but still manages to be thriving in England is DIMITRI PAYET.

Now, Bournemouth are of course going to get themselves a win eventually but I’m not convinced it will be against West Ham this weekend. Payet has managed a goal and an assist in his first two premier league appearances, without picking up a card and Bournemouth also represent West Ham’s best chance of a clean sheet yet, having already managed one against Arsenal. While the floods of players who regurgitate things Jamie Redknapp says down the pub bring in Barkley and Mahrez and wink at you to say they have a trick up their sleeve, you can easily gain some ground by putting in a player who is under 10% picked but I am sure will be close to 20% by Christmas.

Of course if you have Aguero in your side, that’s great. Well done you. Stop going on about it. (Ed; just a hunch, but I don’t think Craig had Aguero) We would all love to have that 13.0m luxury in our squad and he will inevitably score goals. He wasn’t 3/1 to be Premier League top scorer for nothing. However, I wouldn’t really be doing my job if my top tip was telling you to have one of the most deadly strikers in the history of the league.

AGUEROOOOOOOOOOOO #FPL RT if you have him FAV if like me you wish you did!! pic.twitter.com/Z7vqJywkq7

I do like the look of Okazaki at Leicester and they seem to score goals at will this season. They look extremely attacking and look to be having more fun than a night out with Nigel Pearson’s son, under Ranieri. Spurs at home represent a very winnable tie but I’ve plumped for a complete punt and that punt is CONOR WICKHAM. He only got 9 minutes in his first outing for Palace but played the full 90 against Arsenal and was a fraction away from getting on the scoresheet. He is capable of giving Villa’s centre halves a real problem this weekend and at 0.9% picked and 5.9m I think he is well worth the risk in a front 3, providing you can afford him to only pick up 2 points if this all goes horribly wrong. If your other striker is an Argentinian who costs 13.0m then just see Wickham as your work experience boy who might end up being the next Jordan Belfort.

One of the biggest surprises of this year has been that BACARY SAGNA is actually still playing football. Even Arsenal fans have probably forgotten to boo him, such was his non event on a 2014/2015 season. You may also be surprised to know that he has played the full 90 minutes in each of Man City’s impressive opening games.

Nope – can't do it… Can't take Sagna seriously without a ridiculous hairstyle #mcfc vs #CFC pic.twitter.com/Bzd4jCFCCT

Now, I am in no position to tell Mr Pellegrini how to do his job (just look at the league!) but it seems to me that something is working. With that in mind, Sagna has a very good chance of slotting in at right back for the Everton game and he is a ridiculous 5.0m. That’s the same price as Joleon Lescott. Joleon. Lescott.

Ed: I may have encouraged abuse towards Craig last week on twitter and for that I would like to sincerely not apologise…you brought it on yourself 😉

If Memphis Depay scores less points than Nader Chadli this week I will put #FPLDickhead into my twitter bio. Now leave me alone!! #FPL

I’ll hold my hands up. I got it wrong last week. I tipped Memphis to do the business and for some reason he waited until midweek to arrive onto the scene for this season. If his finish against Villa had been an inch the other way, I would have been a smug man but instead I was left with a barrage of twitter abuse and a red face. I stand by the fact he will be an FPL asset this season, but captain him at your own peril! 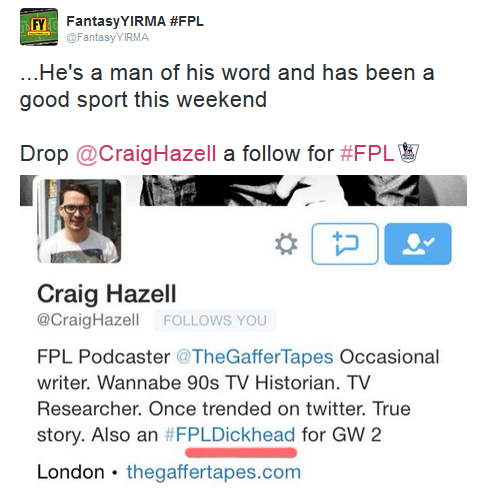 Last week I tipped Andre Ayew in midfield and he scored in his second game running and this week I will plump for his team mate BAFATIMBI GOMIS. I am utterly convinced that Sunderland will go down this season and I fully expect Gomis to pile on the misery. He has started the season in good scoring form and he is still creeping around the 10% picked mark. I fully expect your twitter wrath and I’m unlikely to tip Nacer Chadli anytime soon.