← Don’t Captain a Goalkeeper, even if it’s Arsenal’s Petr Cech
One Bottle of Wine later: Jamie Vardy Out, Sergio Aguero In →

“As Liverpool battled the 12th best team in Russia right now, Simon Mignolet pondered the meaning of life. What’s it all about? Why are we here? What’s the bloody point? I suspect that Simon is a good deal wiser today, for he had the vast majority of an hour and a half undisturbed to ponder such deep questions. He was rudely disturbed from his philosophical musings when Devic smacked the ball past him and into the net at the Kop end. This annoyed Simon, who felt he was on the verge of a Zen breakthrough moment, and was about to achieve true enlightenment. Instead, Simon achieved a fine save a few minutes later, to keep Liverpool only one goal behind. I can now exclusively reveal that Simon actually discovered the meaning of life during the second half when he had sod all to do.”

As you can clearly see, Simon has taken the meditation too far, and is now achieving a full ‘Zen’ state mid-match. How else can you explain what happened last night? He was completely zoned out, and if it weren’t for the ‘6-second rule’, there’s a fair chance he’d still be stood there now, ball in hand, wide-eyed, slack-jawed and perfectly still. The gobshite. 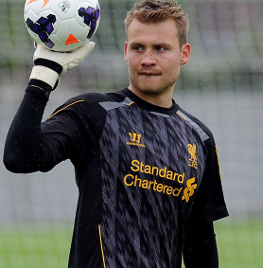 Nathaniel Clyne: Solid. Dependable. Got forward well. Assist for the winning goal. Apart from that I can’t remember him doing much else, and that’s a compliment. If you notice your right back during a match he’s either blitzed the opposition in attack, or dropped a boll*ck in defence. Keep your head down and keep working Patsy. Nice work.

Dejan Lovren: Quiz Time: Spot the Odd One Out:

If you answered ‘D’, congratulations! You’re a winner! (In life that is, don’t contact me for prizes, I haven’t got any). Yes indeed, Dejan Lovren was a mix of A, B and C. I’ve seen some transformations in my time, let me tell you – The reunification of Germany, Caitlin Jenner, and Optimus Prime going from a lorry to the leader of the Autobots to name just three – but the transformation of Lovren under Klopp knocks them all into a cocked hat. If you know what a cocked hat is, please let me know in the ‘Comments’ section below. Ta.

Kolo Toure: Go on, admit it. When KOLO strode forward in the 1st half, beating players, leaving Frenchmen marooned in his wake, you stood up and you yelled at the top of your voice…’SHOOOOOOT’. Oh no, not KOLO. KOLO instead decided to play a couple of sublime one-twos in and around the Bordeaux penalty area, to set up one of his more ‘skillful’ teammates. When they made a balls of it, the ball just flew towards KOLO on the edge of the box, and he knew it was his time. He steadied himself, we all stood in unison, Anfield held its breath, and he BLOOTERED it miles wide. Thoroughly enjoyable. He made it through the game uninjured too. All Hail KOLO.

Alberto Moreno: Alright, own up. Who spiked Bertie’s pre-match Lucozade Sport with 20,000 cups of coffee? Flamin’ Nora, the boy was a ball of energy in that first half. He was supposed to be playing left-back, defending the Kop, but his average first-half position must have been around Row E in the Anfield Road End. Time after time he overtook Jordon Ibe on the left wing – he did more ‘bombing’ than the over-excited fat lad in the local swimming pool (you have no idea how much I am resisting the urge to do a different kind of bombing joke, but I think I should hold off on that). When the caffeine wore off he was a bit more subdued in the second half, which was a good thing, as the team actually needed to produce a solid performance and to defend what they, which Bertie contributed well to.

Joe Allen: Joe has decided that a change of career is on the cards. The 2015/2016 ‘beard’ is now being framed by a mop of long, unkempt hair. The word on the street is that Joe is going to become a ‘Thespian’. No, that’s not what Harry Kane calls a Lesbian, it’s an Actor. Indeed, Joe is currently auditioning for a part in the ‘Trainspotting’ sequel that is due out next year. The long hair, the beard, the overall drug-addled, tramp look should see him land a role, but he’ll probably be relegated to an extra in the background…much like his Liverpool career. To be fair to Joe he put in a hell of a shift last night. He was throwing himself around the pitch like a crazed junkie, a crunching tackle being this next ‘fix’. Hang on, that was all part of his audition! Cunning.

Lucas Leiva: Consistency is a hard thing to achieve in anything. Be honest, are you really consistent in whatever it is you do in life? Do you always turn up on time to your job? Do you always put in 100% effort? (If you say ‘Yes’ but you’re reading this in work, then think again sunshine – Oh, and thanks for reading!). Lucas is one of those people who is incredibly consistent. Unfortunately, what he’s consistent in is in getting his name in the referee’s notebook. Every. Single. Match. He was only playing v Bordeaux as he’s suspended for the game on Sunday, but once more he stuck in one foul too many and got himself booked. I’m not criticising him here, I love his work, and hell knows we need somebody to rough up the opposition. I do suspect that he may have plans in February time where he may well be serving a 4-game suspension. Crafty.

Roberto Firmino: Will Bobby F ever complete a full 90 minutes? It’s one of the great questions of our time, up there alongside ‘Who watches the X-Factor these days?’, ‘How does Wayne Rooney still get picked?’ and ‘Why isn’t the author of this blog paid handsomely for it?’. The answer for all these questions will probably remain a mystery for a while yet. The first-half from Firmino was yet another glimpse of his outstanding ability. He knows how to spring an offside-trap, that’s for sure. Now if he could just improve his finishing, then we’d have one of the best players in the world on our hands. Alongside Philippe too. Oooh, I feel all faint.

James Milner: Aaaahhhh, so THAT’S who our penalty-taker is this season. That had been niggling away at me for a while. All credit to Jimmy, he stuck it away with aplomb.

Aplomb. What a great word.

Anyway, yet another full shift from Captain Milner, who may be a bit limited in technical ability compared to others he plays alongside, but you can’t fault his commitment. There’s a shadow looming over James however. A large, Jordan Henderson shaped shadow. I mean, he’s the ‘real’ captain, so he’s going to start when he’s fit, but who does he start ahead of? Emre Can? Maybe. But imagine a ‘sitting’ Lucas with the boundless energy of Can/Hendo, and the bewitching trickery of Firmino/Coutinho/Lallana ahead. Seriously, I’m going to need Xanax to get through the rest of this season.

Jordon Ibe: A remarkably mature performance from the teenager (he’s still a teenager, right? I can’t be arsed to Google it). He adjusted his game to the insane forward bursts of the ‘Duracell Labrador’ Bertie Moreno, filling in the gaps he left on the wing during the first half, while working his arse off with the rest of the side during the more ‘cautious’ second half display. I’ve said it before, and I’ll say it again, we have Jordon Ibe performing like this, plus £49,000,000 in the bank, and Manchester Shitty have Raheem Sterling playing like THAT. *titter*

Christian Benteke: A. SCORER. OF. GREAT. GOALS. If you’ve read my blogs before, you’ll know what the second half of that sentence is, and that is all I have to say on this matter. If you haven’t, read the others, and this will become clear. To quote Michael Jackson (to the tune of Ben for the hard of thinking among you)

“Ben, the two of us need look no more.

We’ve both found what we’ve been looking for.

You can score great goals for fun

With you in Red we’ll see

Success is a guarantee”

Emre Can: As the game developed in the second half, two things became clear. This game was going to be won through hard work rather than through inspiration, and Joe Allen actually thought he was Begbie in Trainspotting, and needed psychological evaluation. Therefore this substitution made perfect sense. Jackie brought his usual energy, and Liverpool saw the game out. Job’s a good ‘un.

Adam Lallana: A 15′ run-out after Bobby F ran out of steam. He ran around a bit, held the ball up a bit, and I can’t remember much else. Satisfactory.

Divock Origi: Old Jurgen is a big fan of the injury-time pointless substitution, isn’t he? Yet another. Rating? Get tae feck.

I saw something new under Klopp last night. When the team weren’t in ‘dazzle’ mode, he showed that we had a ‘resilient’ mode. Granted the opposition weren’t up to much, but put your hand on your heart and tell me that we’d have seen out that game under Brendan with a CB pairing of KOLO and Dejan. Do you see now? He’s getting another perfect rating solely due to THAT ‘Kop Kids’ interview.

I’m a hetrosexual male (ignore the rumours, I really am), but I’m in love with this man.

← Don’t Captain a Goalkeeper, even if it’s Arsenal’s Petr Cech
One Bottle of Wine later: Jamie Vardy Out, Sergio Aguero In →