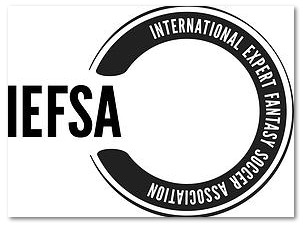 2016 has kicked off being an interesting year Fantasy-wise. Jermain Defoe is the new Sergio Aguero, while Wayne Rooney is the next Jamie Vardy. And no Fantasy game is more interesting than that of IEFSA. This league pits 16 Fantasy teams against each other for overall supremacy. What sets this game apart from other fantasy games, is that players from each Premier League team can only be selected by one side. There’s no 60% ownership of Daryl Janmaat here!

The sides are managed by Fantasy Sports writers from all over the globe. This has led to it being a very tight league, with most teams only a win or two away from the sides directly above or below them. IEFSA conducts its cup games during midweek fixtures, preferring to keep the bread and butter of the league games for proper football time, the weekend.

Please permit me to give you a quick preview of this weekend’s fixtures,

@FuzzyWarbles has signed Bournemouth striker Benik Afobe and will look to him to counter any gains @BenDinnery will see from having Diego Costa up front. I expect this game to be won at the back though, with Lloris, Huth and Otamendi carrying @FuzzyWarbles to victory.

Andrew has a lot of big names in his squad; Walcot, Navas, Pedro, Lamela, Benteke, etc. But they have all been a bit too inconsistent and his side sits second from bottom in the league. @Smokey_Loogy on the other hand is second from the top. His striking pair of Watford’s Deeney and Ighalo has served him well, so expect them to carry the day for him again when they visit a Swansea team who shipped four goals last time out to Sunderland.

Only three points separate these sides in sixth and seventh. @DanRiccio has lost three games on the trot though because his star players of Hazard and Pelle haven’t been bringing in the points. Expect @FantasyYIRMA to pile on the misery thanks to his midfield studs of Yaya and Ozil this weekend. Of course if those two players are kept quiet, he also has Dele Alli and ummm…. James Milner to fall back on!

@RotoZdroik recently signed Defoe to make a front pairing of him and Lukaku. This front two has greatly outscored @SportsByGotti’s front pair of Oscar and De Bruyne. @RotoZdroik sits in fourth in the league and will be determined to bounce back from last week’s sickening loss (he would have beaten 10 other teams in the league). I fully expect him to do so.

The game of the week. @wrigavin is top by three points, while @nikarg is fifth only six points back. Though is this a bit of a false position for @nikarg, perhaps he is only so high because he has conceded the fewest points in his matchups than anyone else? @wrigavin has won four games on the spin though and will have Harry Kane up front for Spur’s home clash with Sunderland, this should carry the day for him.

Poor @DFS_hambazaza has lost 17 games in a row and is languishing at the bottom of the league. But, like Aston Villa recently, maybe there are some signs of life. Aguero finally played 90 minutes and is the kind of player who could win a match-up all by himself. I don’t see it happening this weekend as @nealjthurman will just have enough in Giroud et al to keep him at bay. Expect Temuri Ketsbaia style celebrations in @DFS_hambazaza’s front room if he can pull off the upset though!

Ninth plays tenth in an interesting midtable matchup. A big game for both sides sure, but they probably won’t be worrying those battling to win the league. A bit like a Man Utd/Chelsea game then! @GalinDragiev has lost four in a row, and @GarryIrwin would have beaten him in three of those games. This weekend should continue the trend, with Wijnaldum and Arnautovic doing the damage.

@cjradune is third and on a run of three victories. Expect him to make that four victories against fourteenth placed @TomSunderland this weekend. @cjradune can draft in all his Manchester City players, including keeper Joe Hart, for their clash with Crystal Palace. When Man City do well, @cjradune does well.

The International Expert Fantasy Soccer Association (IEFSA) is a professional fantasy soccer organization. IEFSA strives to provide league members with all the experiences and emotions of a professional club owner or manager to create a fun and challenging atmosphere. Unlike the standard FPL game, each player can only be owned by one team. Experts bid on the players pre-season and in-season with the highest bid winning the player. With a set amount of funds, fantasy managers have to be smart with how they spend their money as they apply their own value to a player rather than it being determined for them. In addition, teams are able to sell/trade during the in-season transfer windows to either improve their squad or increase their bankroll for this season and beyond.