Spurs Alderweireld and Dele Alli made a mockery of my wildcard!

For 9 months, since this season’s FPL was launched, we have all been waiting for one moment. This year gave us chips for the first time ever, and those of us who know the game have been hoping, longing, for a prime time to deploy these weapons. When the schedule became clearer, it could not have been better. We were left with a sequence that was beyond belief, it could barely have been more perfect had we crafted it ourselves. The double game weeks fell so kindly, leaving an obvious route: GW33 wildcard to maximise the bumper weeks with the chips. Looking at my team this week gave me a joy that had never been possible in FPL; I left myself with the potential for around 25+ DGW players over 5 weeks, including 14 in GW34. I even extolled the beauty of my side on Twitter, it was astounding, there was no way it could fail. This was our moment, this was when I would finally propel myself into the top 10k and beyond, I had no limits.

Bench boost active, Bolasie will become Coutinho/Firmino. I can barely look at it it's so beautiful… pic.twitter.com/v1ALW5JByU

The first thing I have to remind myself is that this wildcard was for GW33-35. We are only 1/3 of the way through that spell, and with the potential for huge points next week, and 11 players GW35 (which may prove a rarity hit-free), this could still prove a success. Right, that’s out of the way now.

There are very few times that I genuinely feel like quitting FPL. Sure, I get angry and despondent at times (as readers of this article know all too well), but to truly, honestly, want to sabotage my side, or close my account? That is extremely, extremely rare. I took a break for a year in 2013-14, but that was due to circumstances with a city/job move and a lack of free time. To want to take the last 8 months, 8 months of effort, hope, time, joy, despair, heartache, jubilation, and want to throw it all in the bin? It’s rarer than a Wayne Hennessey clean sheet.

I have had some FPL lows this season – the bench points, the 1st failed wildcard (they have been nothing but trouble), selling players who then perform (notably Bellerin recently) – but this weekend trounced them all. On Sunday I was wondering what the feeling was: it was familiar, I knew it from somewhere in my past. Then I realised: at around 10pm on December 24th 1997, the 6 year old John O’Connor decided what he wanted for Christmas that year. For some unknown reason, a month or so prior, he had told his Mum that he wanted a desk from Father Christmas (don’t ask, I was an odd child). However, as he nestled into bed that night, as his Mum turned off his bedroom light, as the excitement of the impending sleigh visit hit its crescendo, little John had his Eureka moment. He knew what he wanted, it was so obvious: the Everton away shirt, with “Cadamarteri 29”on the back (I told you, I was an odd child). The young Everton striker had been in blistering form at the start of the campaign, and John wanted to show his allegiance. He told his Mum: “I don’t want a desk, I want a Danny Cadamarteri Everton shirt”. His Mum was taken aback, flustered, but John smiled and lay back down, for he knew, he knew, that Father Christmas was magical, and a bit of short notice couldn’t throw him off. His head hit the pillow, and he waited, just waited, for that magical moment the next morning. The next day? A desk. A f*cking desk. The feeling was crushing, John was bewildered, and at that moment, he felt his faith in all that was good dissipating. 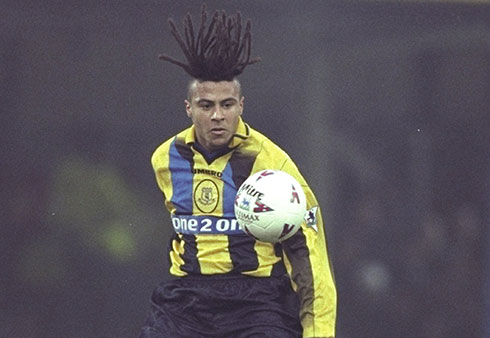 That, reader, is what I felt this weekend. I should have learned a valuable lesson from that Christmas: never place any trust in an event involving an Everton player. However, the issues run deeper than that. Let me try to take you through what happened: if the article comes to an abrupt halt, I have passed out from the horrors.

So, an obvious place to start: my wildcard team. It was brilliant. Sure, there were concerns: ditching Harry Kane was a decision that pained me to the extreme, and losing a Spurs defender was a slight worry, though their fixtures did not yell “clean sheets”. Other than that? Leicester had lost their attacking verve, so I just went with Danny Simpson, Ozil had lost his spark – no issues there. The team I settled on:

3 DGWers this week, 14 next week, and comfortably able to play 11 in GW35 with no hit. I had fit in all the big hitters other than Kane, and there were no holes in the side. Now, let’s look at my old side. Deep breath guys:

My WC team staggered home with 58 points, Lukaku captain. If we remove captaincy and count the points for the squad, they mustered 59. Last week’s side? No captaincy added, the squad soared in with 92 points. 92. They blew the week away, they were in magnificent form. The worst of all? Wayne Hennessey has been sat in my side since GW14. He had not kept a clean sheet since GW19. With Butland out, he was my only keeper, so would have played (especially with the DGW). He went out of my side, and I decided against any Palace defenders, considering the appalling form they have been in. Two clean sheets. Two. One would have been mildly painful, but two!? With the second one against my side, and my captain!? How could you not want to quit!?

I was prepared for a few tough moments, a couple of regrets, but seriously, an Alderweireld goal and clean sheet? Since I bought him in GW14, I have benched Alderweireld twice, and sold him this week. In those 3 weeks, he has returned 2 goals and 1 assist. Since GW14, he has ONLY returned attacking points on 4 occasions, and I haven’t had him in my side for 3 of them (all I got was 1 assist). I have an incredible knack for avoiding attacking points from defenders. Since GW19, Ozil has only returned points on 3 occasions, and his stats had dropped right off, so selling him made sense. Ashley Williams and Sigurdsson came in with a clean sheet and a goal against Chelsea. From the players I brought in, De Bruyne looked primed for big points and is bang in form, but only got a cameo for 1 point. Sakho did not even show up. Bellerin returned to the form he was in before I sold in GW29. Bolasie did nothing in 2 games and, worst of all, Lukaku. Lukaku, who has carried my side for portions of the season, who has had an excellent year, managed sod all in games against Watford and Crystal Palace. My team, my team in which I invested so much time and effort, was a resounding failure. The week that would start my unstoppable climb up the rankings saw me drop 6,000 places (I had dropped 11,000 before Robles’ clean sheet on Wednesday). I created a platform from which to build, and in the last two weeks, I seem to be slipping off it. 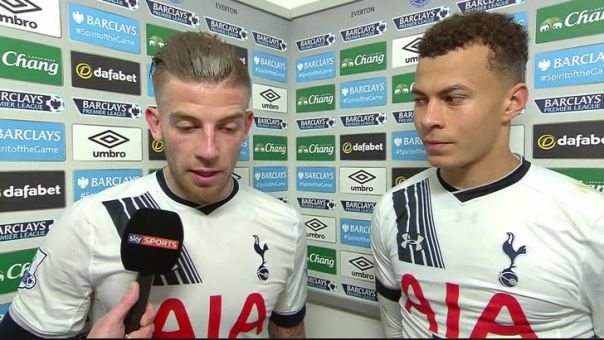 “We spoke about it before the game and decided between us that if @JohnOC1991 was going to drop us from his #FPL team, we were going to screw him over – so we did.. He has no one to blame but himself!!”

ED: I’ve been able to use this picture now each time John has ballsed up an Alderweireld decision. #TimeSaverYIRMA

I guess we have to continue so near the end, and as I am continuing, I have to maintain some hope. This week is the one for which we have been waiting, the huge, bumper double game week, and I have, potentially, 14 DGWers with my bench boost activated. My plan when I WCed was to do Bolasie to Coutinho/Firmino this week but, as I write on Thursday, the rotation if Liverpool beat Dortmund will prove a real headache. I should have a clearer picture tonight. On we go, as much as we may not want to, because we are FPL warriors. Firemen? Doctors? Soldiers? All well and good, but have they ever had Dele Alli score against Man Utd the week that they sold him? We are the real heroes.