Football is back, the Premier League is nearly back, the excitement can hardly be contained. Soon, we can all go back to moaning about FPL bonus points and Guardiola’s rotation. As the moment draws nearer, though, the hours go slower – in this, the final instalment of Lockdown Reviews, James Martin offers something to while the time away…

Fittingly, I’m ending this review series with The Last Dance. Whether I can go out on as poetic a note as Michael Jordan and the Chicago Bulls is highly questionable, but I can at least finish on a positive note. The Netflix show rapidly became a sensation, and it is not difficult to see why.

For a sports documentary to take off in the way The Last Dance has done, it might be presumed that it has to transcend sport. In some ways this is true, but only insofar as the subject himself has grown far beyond basketball to become a cultural icon. Michael Jordan takes the spotlight over the course of ten insightful episodes. Basketball is placed front and centre in each instalment, and yet Jordan’s almost superhuman achievements and mentality makes it feel as though each one is partially pulling back the curtain upon some great force of nature. 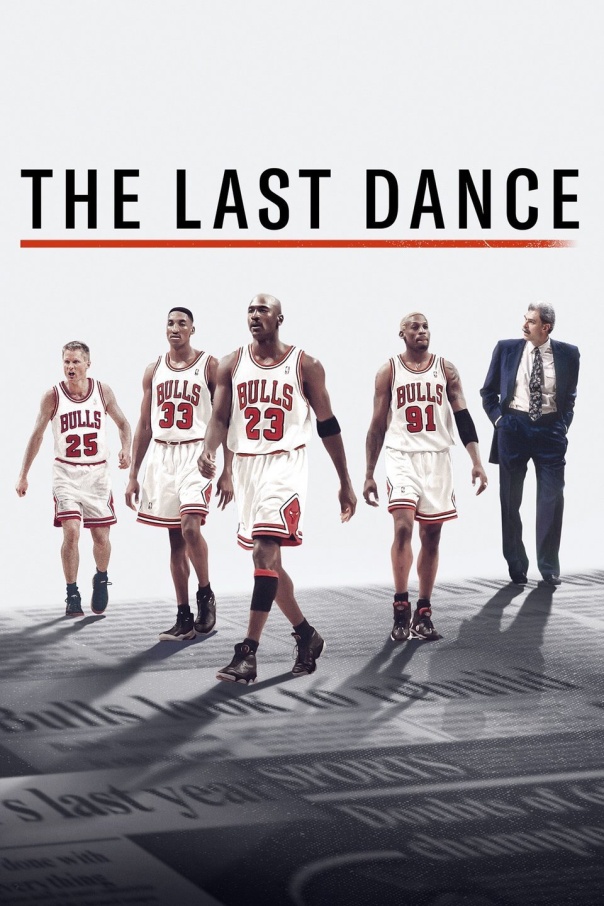 This alone is enough to keep the interest of those with only a casual interest in basketball. The clincher, though, is the chosen focus: instead of a general biopic, which runs the risk of meandering, the documentary is built around and named after ‘The Last Dance’.

This was the moniker coach Phil Jackson bestowed upon the 1998 NBA Championship, after general manager Jerry Krause decreed that Jackson would be moved on at the end of the season. Many of the key players had won five titles in seven years under his leadership, and made it clear they would not continue to play for the Bulls without him: Krause’s notorious stubbornness meant an impasse was reached, creating an irresistible narrative around the campaign.

This was fuelled even more by Jordan, who promised he would retire from basketball if Jackson left the team. One of the greatest players of all time and one of the greatest teams of all time, knowing that this was their last year – the only surprise is that it’s taken this long for a hit documentary.

Even so, the way the programme is put together is a great achievement. It manages to maintain its focus throughout while still managing to explore interesting side-avenues and subplots, using a simple timeline animation to transition between the 1998 story and earlier points in Jordan’s life and career wherever appropriate. Parallels are picked out cleverly, so a jump back in time never feels out of place or forced – each story from earlier on helps further shape the main Last Dance narrative, shedding more light on the myriad factors driving that perfect storm of a season.

Questions never arise about why this somewhat arbitrary ‘repeat three-peat’ – a second set of three consecutive titles – is so important to Jordan. His need not only for greatness, but for sustained greatness, is spelled out through both the flashbacks and contemporary interviews with him: by the time the finale comes around, the viewers are forced to feel at least a fraction of his complete determination to succeed. This trick of presenting 1998 through the lenses of both history and hindsight is a masterstroke.

Things are done in a similar way when it comes to the people on show. While Jordan always keeps the main focus, just as the 1998 season does, each episode allows one of the supporting cast a share of the spotlight. From Scottie Pippen to Dennis Rodman to Steve Kerr, each of whom in turn briefly become the hero, The Last Dance avoids the pitfall of presenting the achievements as though they were Jordan’s alone. Not only does this provide a fairer picture of the dominant Bulls era, it also ensures that each episode remains fresh.

For all of the clever storytelling, though, the backbone of the documentary is the interviews secured. Some of these are historic – the makers benefited from the fact that the Bulls had film crews embedded with them for a significant period of the 1990s. This is matched, however, by the contemporary footage: some of the biggest names from basketball and beyond share their reminiscences on Jordan.

Chief amongst these is of course Jordan himself, who is admirably self-reflective and inevitably adds insight. A novel touch involved the interviewer showing him the comments of other interviewees and capturing his reaction live – this threw an interesting light on his psyche, revealing who he respects and who he still harbours decades-old grudges against. Even without Jordan’s input, there would have been plenty of big hitters involved: Barack Obama, for example, is on hand to give his musings on the Jordan era.

All of this makes for a show that can be talked about as one of the greatest ever sports documentaries. Those completely apathetic to sport may still not be gripped, watching more out of an instinct to follow the crowd than anything else, but for anyone who has even a single competitive bone in their body the story being told will resonate.

It shouldn’t come as a surprise: Michael Jordan got involved, and when that happens nothing less than greatness is an option.

James is a sports journalist with a focus on football. He began writing for LFC Fans Corner over seven years ago, and has since been featured on the club website and The Independent among others. He graduated from Oxford in 2019, and holds the Gold Standard NCTJ Diploma in Journalism.

His portfolio can be found at http://jamesmartin013.journoportfolio.com