Written by @CraigHazell – (that’s important!) #FPL GAMEWEEK 34 It’s DGW madness!! We’ve got teams playing multiple games in a gameweek coming out of our ears! Panic! Hurry! Tell your Mum you love her. (ED: 70+ Previews and you couldn’t have made that line “Tell YIRMA you love her”…For Shame Craig) DEFENDER: BEN GIBSON, BORO […]

Crystal Palace FC: The Road To The Premier League

With the Premier League finished for the season FantasyYIRMA.com will be featuring a number of guest posts.

To kick things off we have @FNW_Blogs with their overview of Crystal Palace’s road to the Premier League.

The Eagles had a shaky start to the season. They had a small squad and an inexperienced but loved manager. (Dougie Freedman) Having lost their first 3 Npower Championship games, they were sitting at the bottom of the table and looking like favourites for relegation. (During this period they also lost 4-1 to league 1 side Preston in the League Cup.) 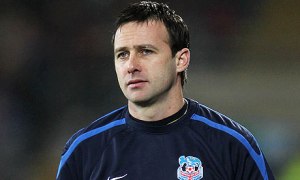 Dougie Freedman left Selhurst Park half way through the season

It looked like Palace were going to have a difficult season, but Dougie made some intriguing signings. He brought in a young skilful player: Yannick Bolasie. He bulked up the defence with an attacking fullback: Joel Ward. He also brought in attacking technicians like Andre Moritz. This immediately helped Palace and they went into their 4th game of the season hoping to get a win against Sheffield Wednesday, a side just promoted from league 1. Dougie’s signings seemed to have paid off because Palace came away from that game with a 2-1 win and the first points of the season. 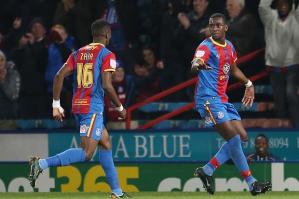 Bolasie sparkled in his first season at Palace

Crystal Palace built on this win and went on an astonishing 14 game undefeated streak, which saw them have a period at the top of the table. During this run, the Palace players and fans were shocked by the news that their manager and former Palace hero Dougie Freedman had left the club to manage Bolton. His move was baffling for the fans. At the time Palace were at the top of the table and Bolton were in the middle. Freedman said that it was based on the fact that Bolton had a better chance of getting to the Premier League and staying there, however fans believed it was for the money.  The big question was who would replace him?  This probably surprised fans even more. The result was Ian Holloway. The fans were delighted with the decision. Holloway had a lot of experience in getting teams promoted to the Premier League and this made Palace’s push for promotion seem even more possible. He started his reign with an easy 5-0 win over Ipswich.

Their run was ended in late November, away to Leeds. Holloway’s boys did not buckle under the loss however. Two games later, they thrashed their main rivals Brighton 3-0.

In January, Holloway brought in a couple of players. One being veteran Kevin Phillips and the other Stephen Dobbie who helped in Palace’s push for promotion. 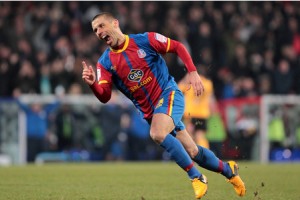 Palace continued to pick up points in most games and come March it seemed like Palace would easily get Play-Off position. However these words might have been muttered too early. Palace’s form started to dip at the worse time possible. They travelled to their rivals Brighton and the Seagulls got payback for the result earlier in the season by beating the Eagles 3-0. After this game Palace were at home to Birmingham. Before this game, Palace had only lost once at home, and that was the first game of the season. This statistic was demolished. Birmingham defeated Palace 4-0. The fans and players were devastated. Surely Palace wouldn’t lose their play-off place this close to the end of the season?

This abysmal run continued, Palace had seven games left. In these seven games Palace lost 2, drew 4 and won 1. Their one win was on the last day of the season against relegation battling Peterborough. Palace needed the 3 points to be 5th in the league and gain a play-off place. There were 4 teams battling for 5th and 6th, (including Dougie Freedman’s Bolton). The game against Peterborough was not easily won, Palace edging the game 3-2 and Crystal Palace’s Player of the Year Mile Jedinak scoring the winner in the 89th minute. Bolton missed out on Play-offs by goal difference.

The Eagles had stumbled, but they reached the Play-Offs, only to find out that their 2 legged Semi Finals would be against bitter rivals Brighton. Brighton came to Palace for the first leg. The game was a battle; however Brighton seemed the better team. They had very good chances but they didn’t capitalise and the game ended 0-0. Palace would not have been the happiest with the result but at the time they were more worried about their top goal scorer, Glen Murray, who had to be taken off in the second half. It turned out that Murray would be out for 6 months.

The 2nd leg had arrived and Brighton were labelled as the favourites. Both teams were pumped for the game and tensions were high. It seemed like experience had pulled through. In the first half, Brighton had more possession but Palace were pressurising and all the Seagulls could do was pass it around the back and try and find an opportunity. Very few came and Palace were trying to counter, but again both teams cancelled each other out.

Half Time came and for one team this would be their last game of the season, for the other, it would be their route to Wembley and hopefully the Premier League. In the first game and the first half of the 2nd game both teams seemed very nervous because of what was at stake. However this all changed in the 2nd half. The game was end-to-end. Good chances coming from both teams. Then Holloway changed tactics. He brought on Yannick Bolasie for Williams and Andre Moritz for Garvan.  Brighton also brought on attacker Barnes, who straight away had a chance, but Julian Speroni made an excellent save which tipped the ball onto the crossbar. Then at the resulting corner, Dean Moxey cleared the ball off the line. These moments proved to be key. The game carried on and in the 69th minute, Mile Jedinak played a lofted through ball from the half way line to the corner flag. Bolasie was on the end of it, and after a bit of trickery, he played in a perfect cross into the box. Wilbraham was at the near post and the ball flew over into the middle of the box. It looked like the chance was lost. However Zaha had a different idea as he ran into the middle of the box and headed the ball into the top corner. The fans, players, and managers were ecstatic! Palace had taken the lead! Now all they had to do was hold on. 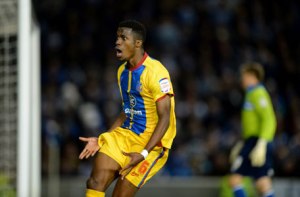 Zaha celebrates after his second goal

The last 20 minutes were tense. Brighton were trying their best to attack and Palace were trying to keep their solid defence. In the 89th minute, a ball was played into the box to Zaha, he took an amazing touch which moved the ball away from the defender and smashed the ball into the net. It was basically over! Brighton fans were leaving while the Palace fans were singing. The referee blew the whistle and Crystal Palace, who had come into the game as underdogs, were delighted. They had done it! They won the semi-final and are now going to Wembley!

Every Palace player on the pitch played a superb game, everyone played their best and Brighton could not handle it. 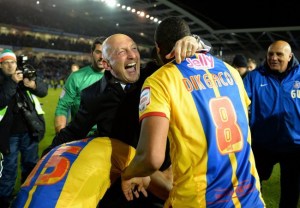 Holloway celebrates with the players after their victory over Brighton

Crystal Palace have nearly reached the end of their journey. They have had many highs and lows and are now training for a chance to be in the Premier league next season. They have faced many opponents but now they are just left with one more. Watford. Will they be able to beat them in the Play-Off Final? Only time can tell.

The 120 million pound game had arrived on a sunny bank holiday Monday. The fans seemed happy and nervous at the same time. As the players warmed up, the atmosphere grew.

The game was not the best, there were many opportunities but they all came to nothing.

The game went to extra time with the score being 0-0. In the second half of normal time, Palace were on top and looked to continue their momentum into extra time, and they did. On the stroke of the first half in extra time, the young superstar Wilfried Zaha got tripped up stupidly in the box! The Palace fans cheered, this was their chance! The veteran Kevin Phillips immediately nominated himself to take the penalty. He lined himself up, and was somehow very calm, even though the Watford fans were right in front of him and booing to their hearts content. Phillips smashed the ball into the top left corner of the net, it was unbeatable. The Palace fans could not believe it, they were ecstatic! All they had to do was defend this lead and they would be in the Premier League next season.

They successfully held their lead and when the referee blew his whistle a massive cheer came from the Palace supporters. Crystal Palace were back in the Premier League! 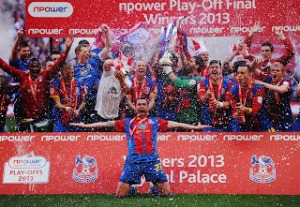 This season has been a great one for Palace, bearing in mind that just over two years ago, they went into administration and were battling to survive in the Championship. They did make it difficult for themselves, but as the fans say, “if they did it the easy way then they would not really be Crystal Palace.”

Now we wait to see who Palace will sign in the summer and who will replace Zaha (who is now a Manchester United player) and Glen Murray, who is out for 9 months with a cruciate ligament injury. Next season will be a challenge for the Eagles but it will also be an enjoyable one. The fans just hope that they do not bounce back to the Championship after one season. They want to make themselves a strong team which can stay in the Premier League.

Many thanks to @FNW_Blogs for the guest post. You can read more from them at http://footballingnewsweekly.blogspot.co.uk/