Big thanks to Yirma regular @shots_on_target for a great insight piece – to view more of his articles check his site at www.shotsontarget.co.uk

There’s been a fair bit of discussion lately about Chelsea’s midfield  pair of  Juan Mata and Eden Hazard and this article reviews their form and fantasy impact to date.
Eden Hazard exploded into life as an FPL fantasy asset, with 6 assists and a penalty goal in his first 2 games against Wigan and Reading. Subsequently he saw his ownership increase to 32% and a price rise from the standard elite midfielder price tag of £9.5m up to an on-form Van Der Vaart-esque £10.3m.  He was the leading pick in Fantasy Football Scout’s Captain Poll for GW7 and returned this faith with a goal against Norwich.
Juan Mata, on the other hand saw a drop in ownership and price due to a withdrawn role, playing in the ‘double-pivot’ position in the opening games.  In this position he pulls the strings from deep, orchestrating play, but is much less involved in the finishing off of attacking moves.

This is clearly represented by a comparison of both players attacking stats from the first two gameweeks with Hazard earning an average F.SCORE of 46 compared to Mata’s 26. 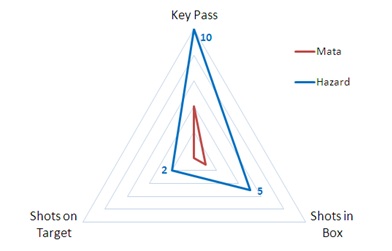 Fig1.  Mata vs Hazard (GW1-2)
It was well documented that following a summer at the the Euros and the Olympics with Spain that Mata was in need of a rest, and he missed out in GW4.  On his return to the Chelsea line-up though, Mata was returned to one of the 3 attacking midfield roles and his performances have again caught the attention of fantasy managers with a goal and 4 assists in three premiership appearances on top of 2 Champion’s League goals.
For gameweek 5 through 7 Mata and Hazard have returned near identical performances in terms of their underlying data., with both registering an average  F.SCORE of 44, Mata slightly edging it by 1 key pass.

Fig.2.     Mata vs Hazard (GW5-7)
Although both players have performed equally overall It’s worth taking a closer look however at each player’s consistency through this period. Here’s a look at their F.SCORE for each of their fixtures to date.

It’s quite a limited sample size, particularly since Mata’s change in position, but there are a few patterns to pick out here.  Firstly Mata’s form and involvement are increasing game on game, whereas Hazard’s is not .  Mata looks to be the more consistent of the two.
Hazard on the other hand appears more capable of a higher score in any given gameweek, and you can regard him as the more “explosive” of the two.  However, it’s possible he could be a bit of a flat-track bully, or even a home ground player, only really excelling in the two fixtures so far  It’s notable he had pretty quiet games in gtougher fixtures against Stoke and Arsenal.
SUMMARY
Both players are capable of returning FPL seasons in the 175 point region.  Mata is the more consistent of the pair and the one more likely to return points through a tougher spell of fixtures, especially with his share of free-kicks and corners.  Hazard is the better pick for easier fixtures and a better captain option in these circumstances.It depends on what you are looking for from your elite midfielder.  For me, I would expect consistent returns week on week despite the opponent, rather than an occasional big returns against weaker opponents.  In this respect Juan Mata would be my pick of the two, especially ahead of the Chelsea’s upcoming  fixtures, and at a considerable £1.4m discount.
Some words of caution though, Mata’s skill-set may see him pulled back into the deeper playmaker’s role in the absence of either Lampard or Ramires , whereas Hazard is clearly suited to the advanced role, plus looks to be on penalties after Lampard.   Also, Hazard is obviously new to this division since a step up from the French League and he may still be finding his feet.
CONCLUSION
Own Mata through a trickier spell of fixtures or for the longer term but pick up Hazard when the league’s minnows pay visit to Stamford Bridge.

To see @shots_on_target follow this article up with some further analysis with Cazorla and Bale visit his website at http://www.shotsontarget.co.uk/2012/10/matahazard-vs-95m.html