Off the Mark: Fulham should give Martin Jol the boot and invest in youth 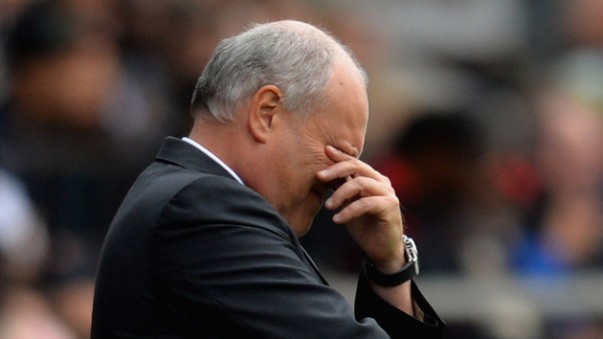 There might be other, more high-profile managers than Fulham’s Martin Jol on the back pages at the moment, but perhaps it’s time everyone started paying a little more attention to the men from Craven Cottage.

Fulham have been one of the more curious elements of the Premier League ever since their promotion in 2001.

The fact that they are still there 12 years later is an achievement enough in itself, but bar their great escape under Roy Hodgson in 2007 there is never any great celebration when the men from West London manage to stay up. It always expected of them.

Due to the money pumped into the club by Mohamed Al-Fayed they’ve never really been treated as the plucky underdogs who are just doing enough to stay in with the big boys, but then they don’t have the mega resources to compete with those bigger clubs either. They are always just there.

Of course they have had their magical moments, with the run to the 2010 Europa League final a stunning achievement and the sort of thing that only unconvincing sporting dramas are made of, but have they become even more comfortable since then?

From the outside looking in there appears to be a lack of ambition, something which could easily be solved once the new owner Shahid Khan gets his feet under the table properly following his summer takeover from Al-Fayed.

Perhaps he’ll eventually make sweeping changes, but right now there appears to be a comfort zone existing above Craven Cottage which only seems to grow when you look at the current Fulham squad.

Dimitar Berbatov, Darren Bent, Scott Parker, Damien Duff, John Arne Riise and more are all fine footballers who have to be respected because of the honours and international caps they’ve picked up in the game, but is their hunger still there? Are they motivated by trying to steer their club to a top half finish?

The same could well be said for Jol, who proved himself to be a good manager at Tottenham, Hamburg and Ajax, but must be confused about just what defines success at his current club. Bar the obvious staying up, what is it that Fulham are actually trying to achieve?

Maybe it is time for the club to trust a younger manager, and perhaps invest in youth a little more on the playing side too. Left-back Matthew Briggs is the only locally-produced youngster in the first team picture at the moment, and he is hardly a regular.

A boss who is still just starting out could see Fulham as a perfect project to try and mould into his own image, and if he was to do it playing attractive, expansive football then he would be sure to get the club’s increasingly exasperated fans on board.

The likes of Gus Poyet and Roberto Di Matteo may have their connections to west London rivals Chelsea, but this could be the perfect job for either of them, and they could be responsible for the rebirth and rebranding of a club who look as though they have got far too comfortable in their own skin.

Last weekend’s loss at home to Cardiff will have already got Jol looking over his shoulder and waiting to be given the boot off Putney Bridge, and if more embarrassment were to come his way courtesy of predecessor Mark Hughes and his Stoke side on Saturday then there could be no turning back.

Were he to go, then it would be nice to see Fulham step out of their comfort zone and take something of a gamble.

Playing it safe will only work for so long, and they might just be starting to realise that.

Arsenal’s Ramsey is streets ahead

Had Arsenal succeeded in signing Yohan Cabaye in the summer then presumably Aaron Ramsey’s current stellar form wouldn’t be happening, but it is about time the Welshman enjoyed a bit of luck.

His 2010 broken leg is quite rightly cited as the reason why the midfielder’s early promise stalled and pretty much came to a halt for a while, but perhaps there is a simpler explanation. He’s still only 22.

The sky is the limit for him going forward, and after overcoming both injury as well as insult (he was a regular target for Gunners fans’ frustrations) then who knows what he can achieve?

The PFA Young Player of the Year award could be a good start.

The award for least surprising half-time substitution of the season so far goes to Newcastle’s Mapou Yanga-Mbiwa on Monday night.

Geordie fans would have been relieved to see Yanga-Mbiwa’s No. 13 held up at the break to signify that he wasn’t returning for the second half against Everton.

Watch his awful performance again if you get a chance. At one point the only player in the penalty area he was marking was Fabricio Coloccini!