It is with great pleasure that we welcome FPL World Number 2 and the FantasyYIRMA.com mini league WINNER Kelvin Travers.

Kelvin had an unbelievable season and is a genuine fan of FPL. Having led the overall game for large parts of the year the league was decided on bonus points following the final gameweek of the season.

Take nothing away from this man – what he displayed this year in terms of judgement and consistency was extremely impressive!

We are proud to say the FY mini- league was won by an extremely deserving winner! Kelvin has been kind enough to put together an overview of his FPL journey this year – Enjoy!

Having had time to get over the disappointment of missing out by just two points on winning the 2012/13 Barclays Fantasy Premier League, I’ve been invited by @FantasyYIRMA to explain some of the highs and lows of my season, and my thoughts for next year.

I may as well start with the lows, and to be honest they don’t come any lower than finishing second having lead for most of the season – infact, having lead for most of the final day, right up until bonus  points were added. Seeing Lukaku grinning at me from my bench with a hat trick and 16 points, knowing my decision to play Fellaini over him has ultimately cost me the chance to achieve the impossible and be no.1 in the world at the end of the season.

Hindsight’s a wonderful thing, who would have predicted West Brom scoring 5 past Man Utd and a Lukaku hat trick?! But, the season is played over 38 gameweeks and the guy who finishes top deserves the accolade.

Some other lows from my season that stick out – my  decision to bench Berbatov in gameweek 11 when he scored two against Arsenal. Transferring in Dzeko in gameweek 27, he played 0 mins and I ended up transferring him straight back out the following week, a waste of two transfers and probably a handful of points.

I’d imagine to some people those aren’t exactly lows – finishing second in the world, benching the wrong player a couple of times, and wasting a transfer; but at the time, to me they were.

I can easily say what was the high point of the season for me – gameweek 19. It was Boxing Day and I was in my local with some friends having some festive beers. Van Persie had already scored and assisted in the afternoon kick off and everybody has giving me grief for not captaining him, as at that point I was 26th in the world and had chosen to captain Bale – it was 0-0 at half time in the Aston Villa vs Tottenham game. Then came the 45 minutes that completely changed my season, a Gareth Bale hat trick, 42 points as captain and when I woke up the next morning I was World no.1 for the first time. An incredible feeling, and unbelievable achievement, and one I thought would only last until the following gameweek and I’d never see again. 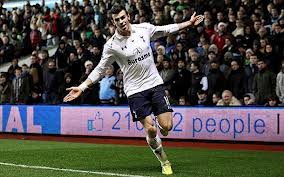 The other high point of my season was taking to Twitter to talk to people about fantasy football and becoming part of the wider fantasy football community. I was completely taken aback by the amount of support and encouragement I received from people over the course of the season, and even afterwards the messages I received after finishing second. I tried to reply to as many messages as possible, so if there was anybody who congratulated me and hasn’t already seen a reply, then I’d like to say thank you for your support.

thank you for your support

I joined the FantasyYIRMA league around the end of January. At the time a guy called Des was at the top, so I got in touch with him on Twitter to check he was ok with me joining as I would be knocking him off top spot. I didn’t want to just join and spoil it for those who’d been top through the Autumn, but as I was chatting with everybody on Twitter I wanted to get involved in the league. Luckily Des said he was ok with me joining, so I have to say thanks to him otherwise I wouldn’t have been in the league.

When I joined though, I never had any intention of claiming the prize money if I’d won – I joined because of Twitter and the fantasy football community, not money. So, I decided at that point if I made it to the end of the season and won the league, I’d donate the prize money to charity. From that point onwards I felt I was playing for charity, and at one point I was overtaken at the top and wanted to fight back to win the money back for charity.

The charity I wanted to support is a local one to me, called the Candlelighters. They do some absolutely amazing work for kids who are growing up with cancer, and if anybody is ever looking for a charity to support I would really recommend you consider helping them.

I’ll be getting into the pre-season games and stats, doing some research on new signings, and I’ll share a few of my ideas and plans for the new season on Twitter.

Aside from joining the FantasyYIRMA league again next year, I also want to make an offer to anybody who wants to try and beat me. I’m going to setup a league of my own, free to join, and for every person who can finish above me I’ll donate £5 to charity. For every person I can finish above, I’d ask those people to donate something of any winnings they make over the season to charity, as little or as much as they can afford.

I’ll setup the league once the new season starts and post the code on Twitter, I thought it might be a fun way to play directly against some of my adversaries from this year, people on Twitter, and hopefully some new players – all whilst trying to raise a few pounds for charity. I hope a few people will want to join me alongside their existing leagues.

See you next season,
Kelvin (@K3lviN)

Fantasy Football Mini-League Round up

Curiosity got the better of me and I had a look. The FantasyYIRMA.com mini-league was ranked 5th in the world! When the curtain came down on gameweek 38 we were delighted to see that the FY league had finished in 3rd place globally! 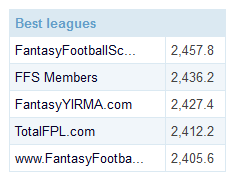 This is a million miles away from when we started a mini-league with a couple of friends a few years back. This wouldn’t be possible without the great support that everyone has given the both the FantasyYIRMA.com site and twitter account this season.

It also would not have been possible without the exceptional players we had in the league this year.

Massive congratulations to Kelvin Travers @K3LVIN  who won the £ 50 Cash prize on offer from the FY mini-league.

Kelvin had a fantastic season and finished 2nd in the World!! A superb accomplishment I am sure you will all agree.

Kelvin led the way for large parts of the season and missed out on the top spot by only 2pts.

Below is the top 10 from the FY mini-league – some ridiculously good performances this year and many thanks to the 1000+ players who signed up to play this season.

The prize for the mini-league is £50 cash. When we confirmed @K3LVIN had finished 1st he has generously asked us if we could donate the prize money to a charity of his choice. An extremely kind gesture from Kelvin and one we were happy to be part of.

£50 Donation has been made to @CandlelightersT from http://t.co/9tb4AIsqhS on behalf of league winner @K3lvin. Gr8 gesture from a gr8 winner

We spoke to Candlelighters and are delighted to help raise awareness for a great cause.

Established in 1976, @CandlelightersT is a charity formed and run by parents of children who have had cancer: http://t.co/a7xUQUUiEQ

“Candlelighters is delighted that your winner Kelvin Travers ( @K3lvin ) has donated his prize money to help fight children’s cancer in Yorkshire.
When a child is diagnosed with cancer, lives are turned upside down in an instant. Not just for the child but for their parents, siblings, family and friends. Priorities change and everyday concerns suddenly seem trivial. Getting well again can be a long and challenging journey, physically, emotionally and financially. Helping and supporting those children and their families is why Candlelighters was formed more than 40 years ago and it is why we are still here today.