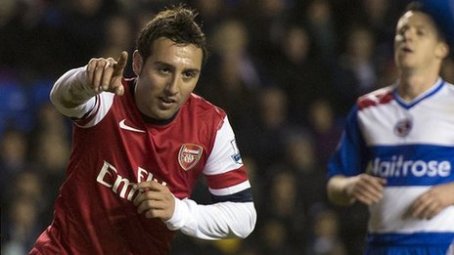 Santi is coming to Wigan, and perhaps he should be coming into your team too.

We all know that this is a special time of year, a time to look forward to and dread in equal measure.

That’s right, the Fantasy Cup starts on Saturday, and including Arsenal’s Santi Cazorla (£9.7m) in your Fantasy team could see you gain the edge over your opponent and secure a spot in the next round quicker than reindeers move on Christmas Eve.

Of course it’s easy to react to a player’s stellar performance in a previous game – such as Cazorla’s hat-trick at Reading – and immediately put him in to your team in the hope that he will repeat such a world-beating display, but there is a genuine reason behind putting your money on Arsenal’s Spanish star succeeding at Wigan in Saturday’s early kick-off.

Everton’s Belgian ace was fortunate to only receive a three game ban for his headbutt on Stoke’s Ryan Shawcross last weekend, but nonetheless he has still presented the many Fantasy bosses who own him with a dilemma. Those who have the luxury of some extra money stashed away – and we all need that at this time of year – will probably be thinking that they could go one of five ways.

But Gareth Bale (£9.5m) still isn’t back from injury, Eden Hazard (£9.5m) has gone off the boil somewhat and David Silva (£9.4m) hasn’t found the net regularly enough. There is of course Juan Mata (£9.5m), but Chelsea face an Aston Villa side who have just brilliantly beaten Liverpool, whilst the ex-Valencia man played the vast majority of Wednesday’s Capital One Cup match against Leeds in midweek.

Bringing in Cazorla should of course come with the warning that Arsenal’s Boxing Day game against West Ham has been called off due to Tube strikes, but the club are reportedly looking to play that match in early January, raising the prospect of a double Gameweek in the near future for their Spanish star.  Santi’s gifts should be well received.

Elsewhere this weekend the match between Newcastle and QPR brings together one team who have been on a steady decline in recent weeks and another one who have just experienced their campaign’s only high point.

Harry Redknapp’s Rangers will head for St James’s Park following the Adel Taarabt (£5.6m) inspired 2-1 win over Fulham last weekend, but Newcastle know that they simply have to win this match following their recent struggles, and they showed enough promise in last weekend’s loss to Manchester City to show that they will give their visitors problems.

Demba Ba (£8.2m) scored his 11th league goal of the season in that match, and he could be turned to again as Alan Pardew’s side look to puncture any QPR optimism immediately.

On Sunday Robin van Persie (£13.8m) and Wayne Rooney (£12.0m) will again team up as Manchester United face a tricky trip to Swansea, which they should be going in to only three points clear at the top of the table given that Manchester City face a home match with Reading on Saturday. Sergio Agüero (£11.0m) and Yaya Touré (£7.9m) look to be the players who’ll impress there, although Javi Garcia (£5.0m) is an intriguing cheap choice following his goal last weekend.

The Fellaini-less Everton go to West Ham where Nikica Jelavić (£8.2m) will be looked to for goals, whilst Liverpool boss Brendan Rodgers has hinted that he could be ready to rest Raheem Sterling (£5.7m) for the home match against Fulham, meaning that even more onus could be put on Luis Suarez (£10.3m) – although the Uruguayan hasn’t scored in his last four games.

The popular Stoke duo of Asmir Begovic (£5.6m) and Shawcross (£5.8m) will face a tough task as they go to Tottenham, whilst Southampton’s Rickie Lambert (£6.1m) and Jason Puncheon (£4.8m) will be looked to to impress against struggling Sunderland.

West Brom’s fine form may have stuttered somewhat, but they can pick it up against Norwich at The Hawthorns, where James Morrison(£6.3m) can be counted on to provide a threat to the visitors.