Many thanks to @shots_on_target for providing this Fantasy Yirma exclusive post! You can check out his top content at http://www.shotsontarget.co.uk . 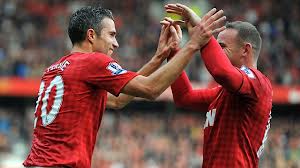 The burning question on many Fantasy Managers lips right now is which Manchester United players to own ahead of the a delightful  fixture list.   Sir Alex’s Ferguson’s men are already the top scoring team in the league this season with 24 goals, 3 ahead of next best Chelsea.  This was despite some tricky fixtures against the defensive set up of Stoke and away at Stamford Bridge.  What can they achieve over the next set of games?

As can be seen, aside from the trip to the Etihad in GW16 there’s hardly a game where United won’t be expected to score, and there could be a few drubbings along the way.   So who to own?  I’m going to take a look through each of the three outfield positions in fantasy football – Defence, Midfield, and Attack.

First up there have been questions raised about United’s defence this season.  An early injury to Vidic has left United without their defensive rock again this season, and it’s telling, although the finger has been pointed at the lack of a proper hard man to boss the midfield, a la Roy Keane and Patrick Viera.  These are players of the last decade though, and today’s football is evolving, spearheaded by Barcelona and Spain.  These days you don’t need necessarily need a hard man in midfield, particularly at the top level, rather 11 good football players, who can pass the ball and use the available space on the field as a team in both the attacking and defensive play.

Sir Alex’s men have been conceding goals and giving up clean sheets, and perhaps not really caring, relying on sheer goal threat to win games.  The £24M signing of Robin Van Persie a clear indicator of their intent this season it seems.

Despite this though, they aren’t defending terribly, and are still within the top 5 or 6 teams defensively, which makes the likes of Jonny Evans and Rafael arguably ownable at £6m or less on clean sheet potential alone.  It’s the attacking potential though were United’s players will be hoping to earn their corn.  Below is a graphic showing Man Utd’s current back four.  The image shows the relative statistics for each of the defender’s key attacking stats.  As shown, Evra and Rafael lead the way in all categories, which is expected of full-backs in a side like United.  Jonny Evans has been a threat from set pieces too, whilst Rio Ferdinand is left to watch the halfway line it seems.

Of these four, Rafael at £6m now compared to Evra’s £6.8m is clearly the man to own.  The Brazilian’s current ownership of 20% means 1 in 5 FPL managers will have him in their line-ups.  Despite his high ownership I’d still recommended buying him, he’s the kind of player who could score really big and represents little risk for his value. 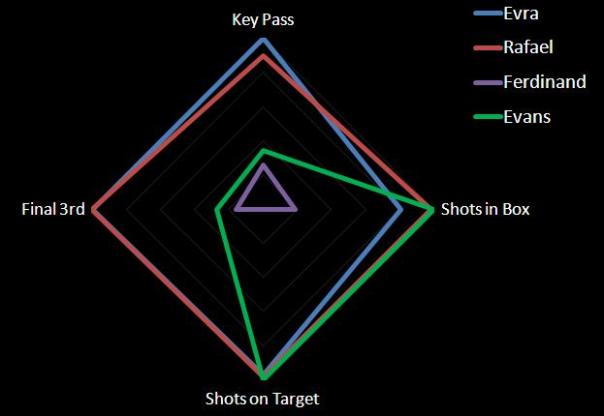 Carrick is the only player in the United midfield that has played every game so far.  Alex Ferguson has really chopped and changed his midfield, bringing in the likes of Giggs and Scholes for certain games, Cleverly has been in and out, Young was injured, Kagawa still is.  It’s really been a minefield.

The chief contenders for FPL points are currently Valencia and Young, with Nani and Kagawa behind these two fighting for inclusion.  The graphic below has been done on a per minute basis and Ashley Young has had little game time compared to the others.  It seems Kagawa and Nani fit into a similar pattern, heavily involved in the attacking build-up (Final 3rd Passes) and creating a medium number of chances and shooting opportunities for themselves.  Valencia is much more direct; he does not feature much in the attacking build-up, or get in many shots. He’s out wide providing the ammo.  With doubts over the starting roles still for Nani, Young, and indeed Kagawa, Antonio Valencia is my pick of United’s midfield. 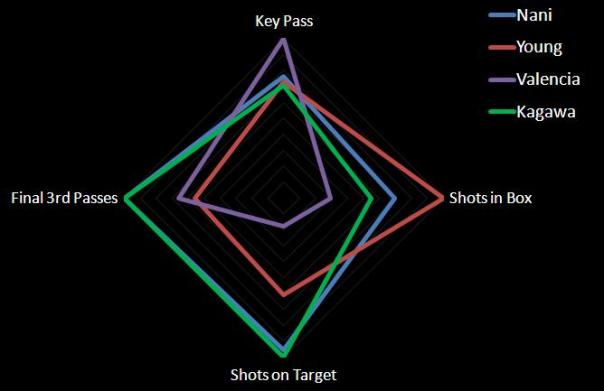 The big question.  Rooney or Van Persie.  Both?  What about neither.  Welbeck and Hernandez are intriguing options and you should act fast if either Rooney or RVP were to suffer an injury, for now they will have to remain on the sidelines.

It has to be said it is still very early in the Rooney-Van Persie partnership.  They only started 3 games together in the league so far.  In these though, Rooney has tended to drop very deep, playing as a midfield playmaker, as can be seen by his final 3rd passes in the image below.  , which represents both players stats in these last 3 games only.  Rooney surprisingly, despite his less advanced position, has edged out Van Persie in all four key stats.  In the 3 games they’ve played together both have scored 2 goals, Rooney has 2 assists, Van Persie 3.  They have also shared set pieces, with Van Persie having most of the corners and Rooney the free kicks.  It really is a close call, but with Rooney coming in at £1.6M cheaper and much less owned he gets my vote out of the two.