Feeling Fuzzy: Gameweek 20 Review “Clearly, Less is More” Written by @FuzzyWarbles (That’s important)   Happy New Year to my fellow fantasy football fanatics!   During the festive period, scheduling was too hectic to put out a gameweek review after every round and I last checked in with you after Week 17. Since then, we […]

Fantasy Football – Bonus Points Guest Post from Richard Kenny – Follow him on twitter @InfernoSix Introduction Bonus points are an important part of the game. Each week there are 6pts on offer per game and so 60pts in total. Over a season, it is theoretically possible for a player who is awarded the maximum […]

Stats from all the Fantasy Premier League (FPL) GW30 matches.   You can see the Top Ranked players from this week, the last 6, and full season on the Top Players page.

Eden Hazard & Chelsea
The top ranked player overall  Hazard created 4 chances and had 4 shots from within West Ham’s penalty box, all on target, scoring 14 points from a goal, assist, clean sheet and 3BP.

Aston Villa & QPR
Despite the defeat for Rangers both teams went for it, the stats will tell you registered decent shot numbers and goals were deserved.  Weimann and Benteke Villa’s main output, Remy and Jenas looked likely for the away team.

Southampton
The Saints made Liverpool look very ordinary indeed and will have deflated a lot of the mounting hyperbole around the visitor’s form.    Rodriguez is starting to look a nice alternative to Lambert at £5.1m but truth be told it’s probably a little late to go for a player like him, especially with upcoming fixtures.  Lallana is back in his stride after injury.

Arsenal and Monreal (15pts) deserves a quick nod of appreciation too.

Swansea  Failing to register a single SoT at home is something I am always keen to castigate.  Fair enough Reading didn’t manage to hit the target away at United but even against a top club like Arsenal you’d expect a team to make the ‘keeper work, at least a little. It’s bad news for Michu owners whose had 9 shots in his last 3 games without any on target.  A blank GW33 has people selling already.

Also worth a mention:  The Stoke attack, but what’s new. 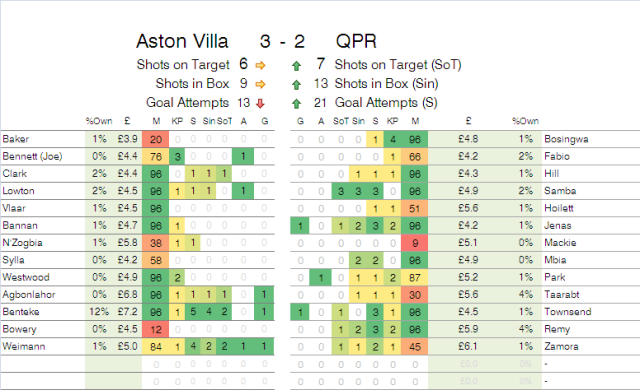 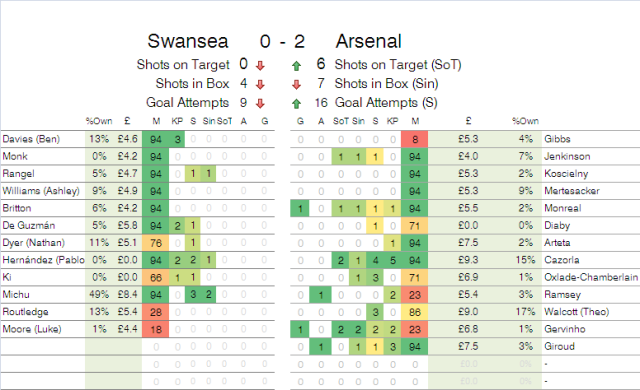 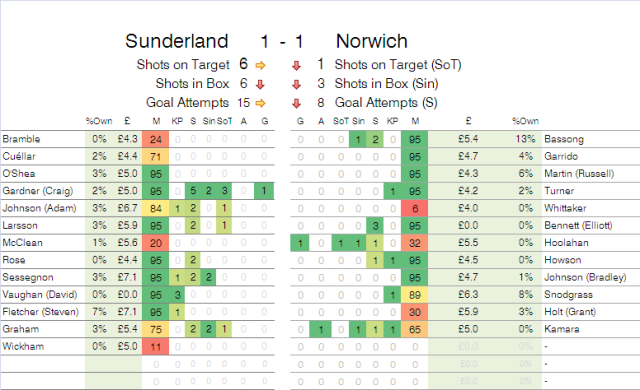