Fantasy Football GW35 preview: Defoe to take a bite out of Wigan?

Well he was never going to exit quietly was he?

Sunday saw the last action of one of the Fantasy Premier League stars of 2012/13, with Liverpool’s Luis Suarez leaving the game for the season with a goal in the 97th minute of what was an 11-point performance against Chelsea – not that everyone was talking about that come full-time.

In his absence, forward options are being scoured and teams are being altered, but perhaps his direct replacement was seen earlier on Sunday afternoon.

After failing to start since the 3-2 loss at Liverpool last month, Tottenham’s Jermain Defoe (£7.9m) – another with a history which includes biting opponents – came off the bench to score in Spurs’ fantastic comeback to beat Manchester City at White Hart Lane last weekend.

With Emmanuel Adebayor (£9.0m) struggling having scored just three league goals all season, Defoe’s return to fitness could be perfectly timed for Andre Villas-Boas’ side as they chase the Champions League.

As far as the Fantasy game goes, Spurs head for Wigan at the weekend before a double Gameweek next week when the north Londoners face Southampton and Chelsea, meaning that Defoe is likely to get plenty of playing time as the campaign draws to a close.

The England forward could prove to be a key man for both Tottenham and for your team as the scramble for league positions becomes more intense, and he could just be the forward to trust in Suarez’s absence.

Those fixtures for Spurs and the return to fitness of Gareth Bale (£10.5m) mean that the Welshman is sure to find himself thrown back into plenty of teams following his recovery from injury, whilst defensively the likes of goalkeeper Hugo Lloris (£5.8m) and defender Jan Vertonghen (£6.6m) could also offer much.

Elsewhere, the battle for the Champions League places will go up a notch at Stamford Bridge where Chelsea entertain a Swansea side who seem to have been on a downward spiral ever since they won the Capital One Cup.

Juan Mata (£9.8m) took his tally to 16 assists for the season after being credited with laying on both goals in the draw at Anfield, and with the Spaniard so key to everything his side do then Rafael Benitez surely won’t risk leaving him out for the clash with the Swans.

The form of both Eden Hazard (£9.6m) and Oscar (£7.8m) has been encouraging in recent weeks, but it is still Mata who makes Chelsea tick and who they’ll be looking to in a contest that the hosts will really need to win in their challenge for the top four, especially given that Suarez took a bite out of their hopes on Sunday.

Arsenal are the other one of three clubs that cannot go into the two still available top four places, and they’ll be hoping that champions Manchester United will have taken their eye off the ball as they visit The Emirates.

The absence of Olivier Giroud through suspension means that Lukas Podolski (£8.1m) is likely to come in from the start for the Gunners, whilst Theo Walcott (£8.8m) could also be restored to the central forward role that he so enjoyed earlier in the campaign.

A little higher up the table than Arsenal, Manchester City host West Ham in a contest in which Carlos Tevez (£9.1m) will be looking to keep up recent form against his former club. Having kept six clean sheets in their last seven home games, the likes of Joe Hart (£6.8m), Pablo Zabaleta (£6.2m) and Vincent Kompany (£7.0m) will be confident of keeping West Ham out.

Having scored only a second goal in 26 games at QPR last weekend, Stoke’s Peter Crouch (£6.0m) could be fancied for another strike at home to Norwich, whilst Christian Benteke (£7.3m) will be confident going into Aston Villa’s clash at home to Sunderland.

At Goodison Park, Everton will be going for a sixth home win in seven games as they host Fulham.

Marouane Fellaini (£7.4m), Kevin Mirallas (£6.9m) and Leighton Baines (£7.8m) are likely to garner the most attention, although for a cheap choice it could pay to go with Victor Anichebe (£4.4m), who has started the last six Blues games and is sure to have chances against a Fulham side who have kept just three clean sheets on the road this season.

Is stupid Suarez worth the hassle? Well, yes (@Mark_Jones86) 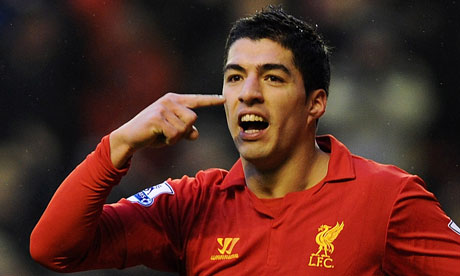 You didn’t think he’d let the season end without hitting the headlines again did you?

A campaign which featured him admitting diving in an attempt to win a penalty against Stoke and an FA Cup goal against Mansfield scored with the aid of his hand represented a pretty quiet one for Luis Suarez. There was always going to be more to come.

When it arrived though, it was as shocking to witness as anything that has gone on before in the Premier League.

His bite on Branislav Ivanovic in Sunday’s meeting between Liverpool and Chelsea was always going to provoke the kind of outrage which the Uruguayan seems to specialise in. The moment Suarez opened his mouth millions of fingers began tapping at millions of keyboards worldwide.

Regardless of that, it was a stupid, bizarre and downright unacceptable act.

Suarez was wrong, which he has since admitted. His club – a club who finally seem to have the people in place to deal with the fallout from one of their star forward’s brain freezes – have made all the right noises so far. Manager Brendan Rodgers and managing director Ian Ayre spoke quickly and correctly.

That isn’t enough to appease the masses though. Nothing short of Liverpool firing Suarez out of a cannon and into the River Mersey was going to do that.

There have been shrill, breathless calls to sack the forward from all quarters, but such a belief is backward.

Suarez is Liverpool’s key asset. His 30 goals this season – a season which is now surely over for him – have transformed what is still very much a team in transition into one capable of troubling the elite. Why would any club want to get rid of their best player? You can rest assured that each and every football club would make the same decision that Liverpool have. Yes, even yours.

The sense of tribalism, morality tales and finger pointing that exists in football means that your rival is always there to be judged. Referees can be pushed over, fans and ballboys can be kicked and players can be bitten but does that ever lead to sackings? No, it just leads to disapproving tut-tutting from supporters and a lingering sense that their club would do things differently. They wouldn’t.

Blame the current football climate if you want, but it has almost reached a stage that the only thing a modern club cannot afford to have is values.

Were Liverpool to sack or actively look to sell Suarez then what happens then? Well another club buys him obviously. He becomes someone else’s problem.

But when that problem is so crucial, so vital and so integral to each and every thing that you do, what then?

He needs to prove that he can be just as effective a player without this devilment that infiltrates his character.

That may take time, but he’s likely to be offered that time and the help he needs by a club who simply can’t afford to see a £22.8m investment leave whilst they battle to rejoin the elite of the world game.

Liverpool knew about his character flaws – they signed him from Ajax whilst he was still serving a ban for biting PSV Eindhoven’s Otman Bakkal in 2010 – and so it would be pretty hypocritical of the club to distance themselves from Suarez now.

You only need to have a limited knowledge of football to know that they were never going to do that anyway of course, he is far too important and far too influential for that.

He is not though, as Rodgers made clear, ‘bigger than the club.’

It is high time that Suarez started to think along those lines too.

Just thinking at all would be a good start.