← Off The Mark: Time for Tottenham talking to stop as post-Bale era begins
Premier League- @FantasyYIRMA VS @Fantasy iTEAM → 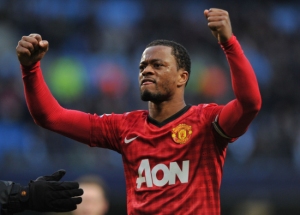 In the rush to acclaim goals and assists, the Fantasy Premier League points on offer for clean sheets are often forgotten about.

Throughout last season we frequently used Gameweeks to open our Case for the Defence, during which we pointed out which of the less heralded members of your team you could rely on for a few of those important points which would see you leapfrog your mates and lead you up your mini-leagues.

With the bonus point system suddenly seeming to favour the men at the back, this time around singling out defenders to pick seems all the more important, and we start our latest defensive special at Old Trafford where Manchester United will be seeking to bounce back from their defeat to Liverpool before the international break.

David Moyes will expect, no demand – have you seen that stare? – a clean sheet at home to Crystal Palace, and left-back Patrice Evra (£6.5m) will be crucial to his hopes of achieving one.

The Frenchman weighed in with a career-best four goals and six assists on the way to last season’s Premier League title, and having seen United’s move for Leighton Baines fail this summer he’ll be determined to show his quality once again.

Newly-promoted Palace will surely be on the back foot throughout the contest early on Saturday afternoon, and with United seeking to get back to winning ways they could find themselves in for a rough ride.

Evra will be doing everything he can to get forward and supplement his side’s attack as well as keep things tight at the back, and he could be a useful asset to your side as Fantasy action resumes.

It’ll be resuming with plenty of eyes on Tottenham’s new boys as they take on Norwich City at White Hart Lane.

With Gareth Bale now officially a Real Madrid player, the spotlight will be on the likes of Roberto Soldado (£9.7m), Erik Lamela (£9.0m) and Christian Eriksen (£8.0m) as Andre Villas-Boas’ side seek to bounce back from a defeat in the North London derby, but having kept two clean sheets in three matches it’ll be the men at the back from Spurs who’ll also garner attention.

Goalkeeper Hugo Lloris (£6.0m) is proving to be a solid addition for plenty of fantasy managers, but it is the goal threat of defender Jan Vertonghen (£7.0m) which should be trusted against the Canaries.

The Belgian scored five times last season and has already picked up three bonus points this time around, and he’ll be a danger against a Norwich outfit who know they’ll have a tough task on their hands.

Another impressive Belgian is the Liverpool goalkeeper Simon Mignolet (£5.7m), who goes to Swansea on Monday night off the back of three successive clean sheets.

The top of the table Reds have certainly been the team to follow for shutouts following three successive 1-0 wins, and it’ll be worth keeping an eye on which one of Andre Wisdom (£4.4m) or Martin Kelly (£4.3m) is chosen by boss Brendan Rodgers to replace the injured Glen Johnson at right back. With Johnson out for several weeks, theirs could be a valuable addition at a cheap price.

Elsewhere across a weekend filled with intriguing fixtures, the search for the defensive goldmine of a 0-0 draw takes us to the KC Stadium.

Both of the newly promoted pair of Hull City and Cardiff City have failed to score in two of their three games so far, and a stalemate would certainly please the likes of Maynor Figueroa (£4.5m) and Steven Caulker (£5.0m) at the back for their respective teams.

Chelsea go to an Everton side who haven’t scored in two, which will be good news for the back four of Branislav Ivanovic (£6.5m), John Terry (£6.0m), Gary Cahill (£6.0m) and Ashley Cole (£6.5m) who have played every minute of their three league games so far. With Romelu Lukaku ineligible against his parent club they’ll be hopeful of a third clean sheet.

But perhaps a better chance of one of those comes at Craven Cottage, where Fulham host a bottom of the table West Brom team who are yet to find the net in the league this season.

If the hosts are to prolong that run then stalwart defender Brede Hangeland (£5.0m) is sure to play a key role.

The Norwegian picked up three bonus points on the opening day of the season at Sunderland, and having devoted our entire preview to the men at the back it’d be nice if he could oblige for us again.

← Off The Mark: Time for Tottenham talking to stop as post-Bale era begins
Premier League- @FantasyYIRMA VS @Fantasy iTEAM →