← Fantasy Champions League: Quarter-Final Preview “This is going to get Messi”
Zlatan Ibrahimovic is out Injured and Arsenal’s Mesut Ozil sells hats! →

It’s DGW madness!! We’ve got teams playing multiple games in a gameweek coming out of our ears! Panic! Hurry! Tell your Mum you love her. (ED: 70+ Previews and you couldn’t have made that line “Tell YIRMA you love her”…For Shame Craig)

In the spirit of this over exaggeration, I will pick only players representing their clubs twice in GW34. In defence it’s Mr Reliable of your bench this season, Ben Gibson. I tipped George Friend pre-season to fill this role and while I was close I didn’t get it quite right. Boro have struggled this season but it isn’t the back 4 that will take the blame for their probably relegation. Too many draws and not enough goals has been their hubris and Gibson and co can hold their heads high. They looked a more attacking threat against Arsenal and could’ve salvaged something from the game but were up against Alexis Sanchez. This week Bournemouth ad Sunderland are far less of a threat and they could revert to their 0-0 or 1-0 games. Desperation could of course cause them to throw caution to the wind but I’m jut not sure they have it in them, change of management or not. I reckon Gibson will pick up 6 points over the 2 games but you never know where bonus/goal points can come from and if he gets anymore than that, he’s well worth the start.

Once again I’ll be picking former Englishman Wilfried Zaha for his, all be it, tough double game week against Spurs and Liverpool. His 133 points so far eclipse any previous fpl season of his and he hasn’t stopped yet. In fact, if you saw him play against Chelsea, he looks like he’s just getting started. Your gut instinct tells you to drop him against two ‘big’ teams but then my gut instinct told me to buy an Atari not an Amiga and that One True Voice would make a second album. Big players perform in big games an Zaha is showing that he can score points regardless of opposition. Palace have got results against Chelsea and Arsenal of late and I’m sure thousands of players will have benched their Eagles with regret. Don’t make the same mistake. I’m even tempted to give him the armband. 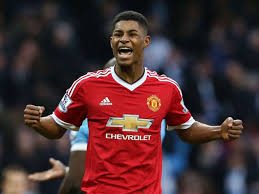 Zlatan is dead. Long live the Zlatan. As Ibrahimovic disappeared into Thursday night, neutrals reached for their phones and curiously hovered their finger over Marcus Rashford, like a pondering wizard with a moral dilemma, or the lottery adverts in the 90s. Rashford is the obvious heir to the Old Trafford throne and after months without a goal, he has emerged with the confidence that forced his way into the England squad. Mourinho has decided Anthony Martial is the latest target of his horrendous man management and Rashford could well be called upon to see United through to the end of the season. If the last few games are anything to go by, he will have a few more goals this time next month.

I hate poetry. My English teacher would always ask me ‘but what does it mean?’ as he challenged me to delve into animal imagery or nautical metaphors of a 6 line poem written hundreds of years ago. I would argue that neither of us knew what it meant as we weren’t there and he would eventually ask me to leave the class.

The poetry I do believe in, however, is real life poetry.

Step forward Christian Benteke.  A proven Premier League goalscorer at Villa, Benteke was a coveted acquisition for Liverpool but for whatever reason, it just didn’t work out. When that situation describes several strikers at Anfield over the years you have to wonder who is to blame? Liverpool’s loss was Palace’s gain. Benteke gave Arsenal’s centre halves absolute hell a couple of weeks ago and even when he doesn’t score he does so much for Townsend and Zaha to run in behind. I don’t think Matip/Kalava/Lovren will fancy an afternoon of constant leaping next to the Belgian powerhouse and you can just see him getting on the scoresheet against his old club. You can also bet he will assume penalty duty. That doesn’t even take into account the Spurs game and while we presume Tottenham will get the win, you wouldn’t be surprised if it was 3-1 or 4-1.

This expert #FantasyFootball blog is as relevant as ever*

Jesse Lingard is 0.9% picked but has now started the last 5 United games without many fpl players really noticing. Sure, he has generally been replaced but it’s par for the course for the position. Zlatan’s injury obviously frees up need for attacking players but that’s not the only reason for Jesse’s inclusion. The Rashford/Lingard (Rashgard sounds like a cup for your balls) combination was a revelation against Chelsea and if their movement can do that to the best team in the League, then there’s no reason it can’t give Otamendi and Stones problems. Providing he can stay fit and maintain form, he could be a nice little differential for the run in. So, in the words of B*Witched ‘Jesse Hold On’.

← Fantasy Champions League: Quarter-Final Preview “This is going to get Messi”
Zlatan Ibrahimovic is out Injured and Arsenal’s Mesut Ozil sells hats! →