#FPL Gameweek 28 Preview Written by @CraigHazell  You can also listen to Craig, Tom and Ash on their Fantasy Football Podcast – The Gaffer Tapes DEFENDER: Jose Fonte, Southampton This week I’m going back to what I know. That’ll be Jose Fonte then. He’s a popular pick at 19.1% and he’s been Mr. Reliable for […]

The NIFFTY (Northern Ireland Fantasy Football Through Yirma) League is off and running.

Here are the Head to Head games for GW3…

Fantasy Yirma’s Chief Football Writer @mark_jones86 takes on our man across the pond @advertisingweek in an interesting match up…Mark has played his wildcard already- will it pay off??

in a tightly contested match up. Meanwhile, BBC Ulster’s Alan Simpson @alansimpsonbbc plays Larne export Neil Gardiner @larneboy73 in a match sure to be high scoring in terms of points….

Keep up to speed with the NIFFTY league and see how our GAWA boys get on- @keithgillespie7 @michaeloconnor8, @grantmccann11 and the Feeno aka Warren Feeney are all having a go at Yirma this year.. which one of them will finish higher???

NIFFTY LEAGUE IS BACK!!

The NIFFTY LEAGUE (Northern Ireland Fantasy Football Through Yirma) started in January 2012 as an invitational Head to Head version of the main game.

Reset and raring to go for the new season NIFFTY is back!

Capped this year at 38 people we have a great mixture of Northern Ireland legends, current Internationals, local radio personalities and the 20th most influencial man in Northern Ireland…

We feel the NIFFTY League has an impressive line up!!  Keith Gillespie, Warren Feeney, Grant McCann and Michael O’Connor have almost 200 International Caps for Northern Ireland and much is expected of their teams!

Alan Simpson Vs Stephen Clements is the NI radio grudge match – battle of the airwaves!! I imagine a forfeit for the loser of this pairing could be quite entertaining….

With several fantasy football enthusiasts and of course the Fantasy Yirma Admin team of @ryano83 @mark_jones86 and @pedro_lamb this league promises to throw up some good matches and produce some questionable banter on twitter. 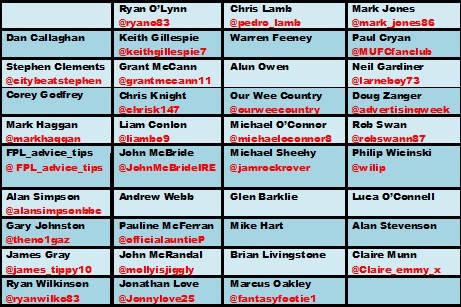