All in game prices are from the Telegraph Fantasy Football game – namely because FIFA still have not released the official game yet!

You can read the full Group A-D previews below also

The Group Of Death usually contains lower seeded European teams, but this year Africa and Asia round out a group topped by two of Europe’s big boys. The Portugal / Spain clash on day 2 of the tournament will be eagerly anticipated, but Morocco and Iran are good teams themselves and it won’t be plain sailing for Ronaldo, Iniesta and co after their opening game. There’s a good chance of shock results in the group, it’s whether there are multiple shocks causing the big boys to tumble out. With plenty of fantasy options throughout, the competitive nature of the group makes for difficult decisions.

After losing their opening qualification game, the Portuguese made light work of the group, winning nine on the bounce with a goal difference of +30. In Ronaldo they have one of the two best players in football, a fantasy monster and therefore will have a shot at winning the trophy, never mind the group.  After winning Euro 2016 with a solid defensive approach and Ronaldo to break teams down, the emphasis has changed somewhat. Defensively the players haven’t changed, which is part of the problem. Pepe and Bruno Alves have acquired a combined 71 years, but remain the starting centre back partnership. They have more attacking options however, Bernado Silva is coming off a decent first season at Man City, though some other midfield options struggled last term. I’m looking at you, Joao Mario. 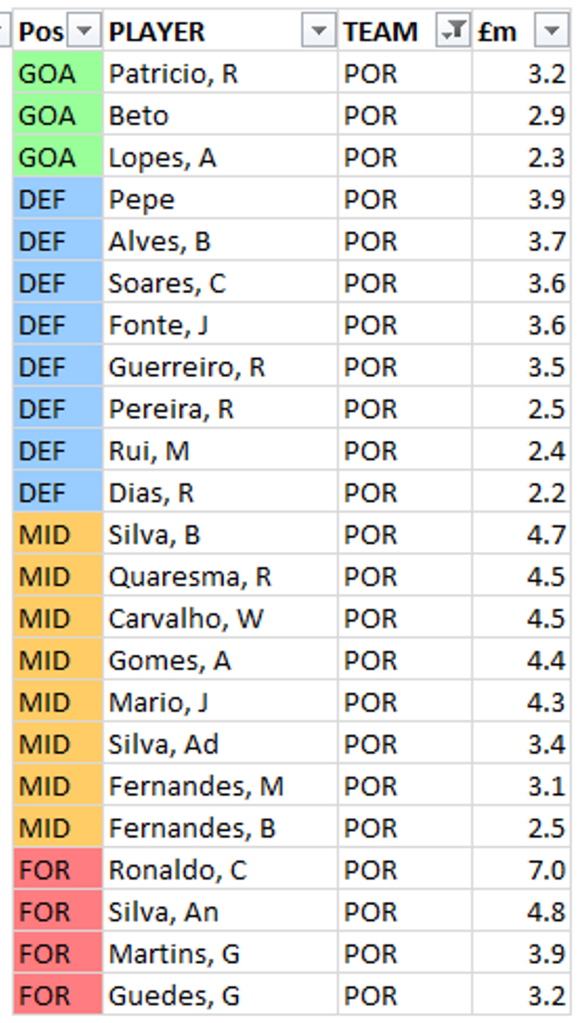 Ronaldo is unsurprisingly the most expensive player on the game, but that isn’t prohibitively expensive. In fact, should you chose, it’s perfectly possible to have Ronaldo and Messi without entirely detonating the rest of your lineup. If you’re taking one of the two, Messi has the easier fixtures on paper, but Ronaldo is matchup-proof and a weapon in every sense of the word. Andre Silva is an interesting shout up front, for considerably less than Cristiano. At 4.8m he’s a price point similar to players who likely won’t start or that play for far weaker teams. He is obviously overshadowed in this team, but 9 goals in 10 games through qualifying combined with Ronaldo taking most of the attention from opposing defenses means you can have some confidence in him as a third striker.

Pepe’s leadership and experience will be vital in holding a weakening defense together, but as their most expensive defender and a walking yellow card, he’s to be avoided. Ricardo Quaresma will be a familiar name and had four assists in qualifying, but is often utilized from the bench, something made more likely given the tough games Portugal face.

Though Spain have moved on from Vincent Del Bosque, new manager Julen Lopetegui players and style are pretty similar, maintaining the possession based, high press football that was so successful for La Roja’s golden generation. They are understandably a favourite at the bookies, with a host of attacking options through midfield, an experienced defense and the world’s finest goalkeeper. After disappointing in consecutive tournaments (group stage exit in WC 2014, last 16 exit in Euro 2016), it will likely be the last tournament for several big names, including the delightful Andres Iniesta. The likes of Iniesta, Sergio Ramos and David Silva will want to end on an international high.

Real Madrid midfielder is likely to start in behind Diego Costa and is slightly cheaper than the more-dellightful-than-Iniesta, David Silva. Silva had five goals plus five assists in qualifying, which I believe is a total of ten goal involvements. Isco had five and two respectively, but in almost half the minutes. Spain aren’t heavily reliant on one or two players for their goals, so when targeting their players it’s worth considering the attacking midfielders who won’t be goal dependent.

Well, Morata for one. That the Chelsea striker is the highest priced sticker on The Telegraph tells you about Spain’s lack of clarity up front. Costa and Igor Aspas are favourites to get the nod for the opener against Portugal, but neither will have a long leash if things don’t start well for the Spaniards. They aren’t crazy expensive, but I’d want a more solid starter for my money. Iniesta’s price point makes him interesting, but he’s not likely to be playing every minute given his age.

Ouch, that group hurt. The Atlas Lions is an awesome nickname and for that alone they deserve better than getting multiple European powerhouses. They are, however, relatively well built to compete in the group, an unbeaten qualifying campaign was built on solid defensive foundations and that is the sides strength. Obviously it’s a strength that will be severely tested in Russia and somewhat ruins their fantasy value. In a weaker group you’d be happy to invest in their defenders, but in a group with essentially one potential clean sheet, that’s not such a smart move.

Hakim Ziyech is the crown jewel of the Morocco side, will play in the hole and the attack runs through the Ajax playmaker. With nine league goals and 15 assists in the Eredivisie this season, he’s an attacking threat and will be on set pieces. The opening game will be huge for the team and Ziyech who will hope a big tournament performance will seal a move to one of Europe’s elite sides.

If they get through the group, it will be by beating Iran and keeping things tight, which would point you to their defense, but that’s a big risk given their group-mates. Ziyech is priced higher than the rest for a reason, he’s the only option from the Morocco side. 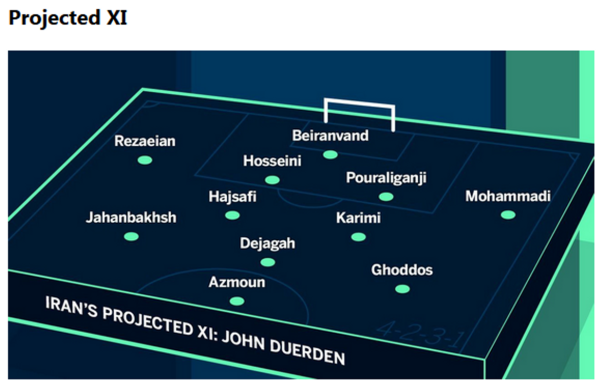 Carlos Queiroz’s men have dominated in Asia for several years, including an imperious qualifying campaign where they didn’t concede until the final game, but the step up in standard for the World Cup is huge. That’s not to say Iran don’t have a good team, they have several players plying their trade successfully in Europe and in truth they have better players in the attacking third. Not really ideal for this group where Morocco are a solid defensive unit and attacking the big boys will play into their hands. 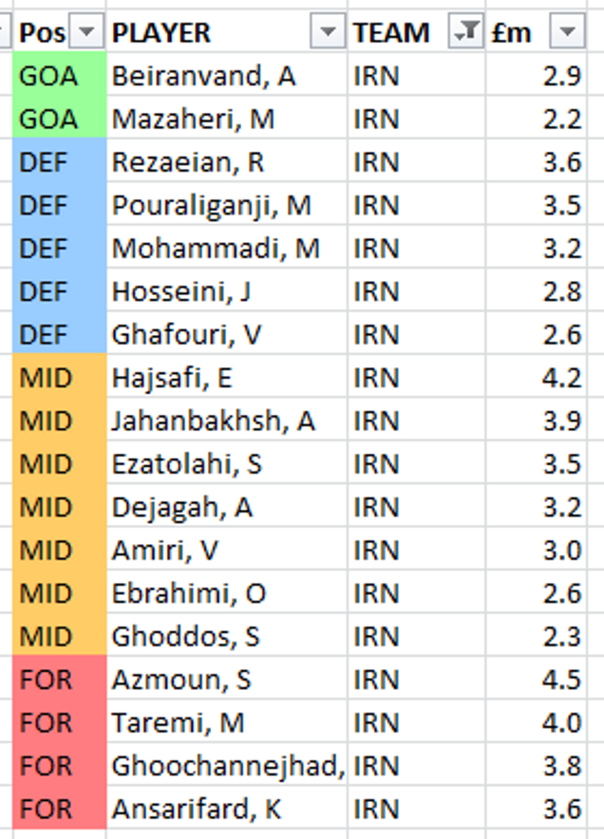 Striker Sardar Azmoun will be on familiar turf after a decent season at Rubin Kazan, but AZ Alkmar winger Alireza Jahanbakhsh is the one to target. He finished as Eredivisie top scorer, adding 12 assists to his impressive 21 goals league goals. At 3.9m he’s really cheap for a talented attacking option, but the schedule probably makes him unviable.

All of them. A tough break for arguably Asia’s best side, but the group is what it is, so look in a different bargain basement. Hajsafi at over 4m is particularly unappealing.

This post originally appeared on https://www.patreon.com/bangaverage where Mike, John and FantasyYIRMA founder Ryan can be found talking Fantasy Football Nonsense on a regular basis