to read more from Fantasy Yirma contributor @shots_on_target visit his site at http://www.shotsontarget.co.uk 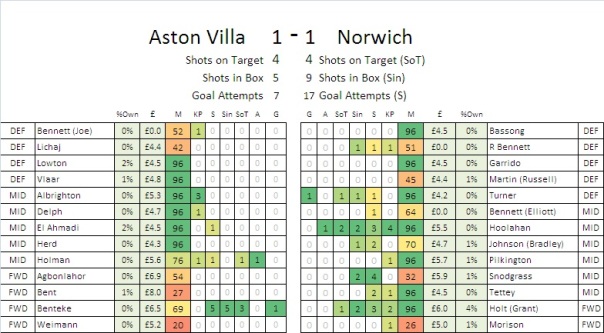 One of the least anticipated matches of the weekend probably,w with both teams expected to be struggling in a relegation battle come season end.  I had tipped Villa to win this 1 or 2-0 with both Lowton and Holman featuring in my GW9 Select XI.  Bennett’s red card on 52 minutes change the game for both teams with Lambert deciding to sit back and protect a 1-0 lead.  Following the sending off Norwich had 11 attempts on goal and Villa had 0.  Neither team really offer anything from a fantasy perspective.  I’d like to get excited about Benteke, but can’t. 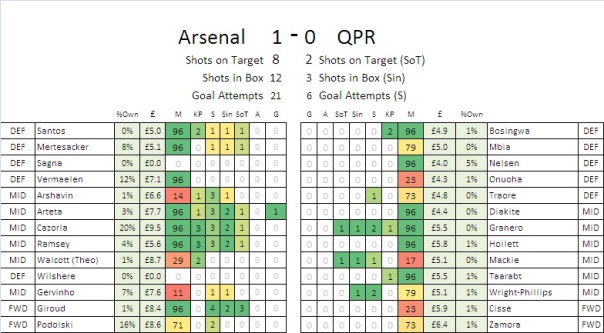 Another frustrating day for Arsenal fans and owners of their fantasy assets (including yours truly).  With Gibbs still injured and Jenkinson immediately ousted from the team by Sagna the combined 31% ownership pair miss out on a clean sheet.  Chief threat for the Gunner’s still resides with Giroud and Cazorla and Mark Hughes’ teams do have had a habit of frustrating superior opposition.  Arsenal’s 8 SoT is usually enough for 2 or 3 goals and it’s time for a deeper look at Arsenal and their ability to actually score goals which I will be doing later this week. 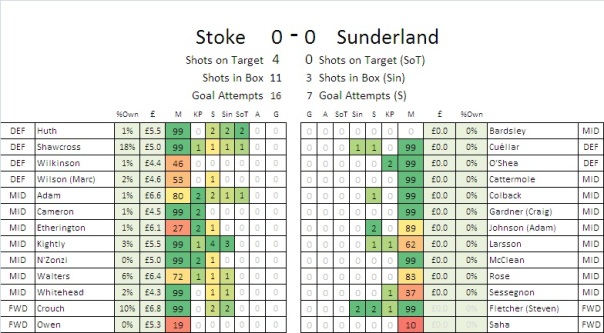 I know I bang on about shots on target but Sunderland had none in this match, zero, nada, zilch.  So far this season they have had 12 in total.  Even if Steven Fletcher was capable of scoring with every chance he got they still would be in the lower half of the league for goals scored.  As it is, they are bottom of that particular list with 6. Stoke I feel should’ve gotten something out of this game, with my budget pick Kightly continuing to get shooting chances in the box.  Big shame for Wilson owners who will be out for a good while now with a broken leg. 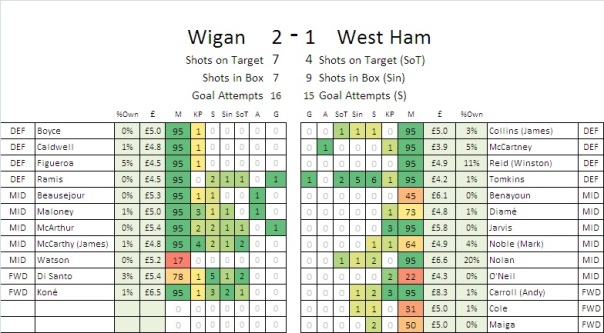 An interesting game this, at least from my seat, as a gauge for where both these teams are this season and the stats tell the story really.   I would judge this team’s even with Wigan prospering here from home advantage.  Tomkins for West Ham had a hell of a game and was the Hammer’s chief threat with Wigan keeping the partnership of Carroll and Nolan very quiet here.  For the Lactics there was plenty of involvement from all positions, with Di Santo and Kone equally involved up-front and Maloney and McArthur key players from midfield.

The weekend’s highest scoring match in which Reading showed that they can score goals but reminding us that they can’t defend them.  To be fair, Fulham are a good attacking side and have improved on the road from last season with Berbatov’s class up front clearly showing, as well as Ruiz’s settling in this division after his move from last year.  I do like the front three of Berbs, Ruiz and Rodalleg.  Chris Baird is also starting to make a bit of a name for himself as an out of position defender who can pop up with a few goals.  Reading’s goals came from a mix of players who scored with their real only chance of the game so I would not get too excited about anyone of these.

This was the weekend’s biggest surprise surely, that City did not put 3 or 4 past Swansea.  City are really missing the quality of Silva in games where they need to unpick a well-organised defence, although that’s not really something we could have said so far about the Swans this year.  Mancini claimed his team were “so tired”, all expect for Tevez it seems (rested midweek) who had the busiest game for City.   Swansea didn’t have a lot of great chances but Michu continues to be involved in their best, with Laudrup’s decision to continue deploying the Spaniard up-front maintaining his considerable fantasy potential despite a turn in the fixture list. 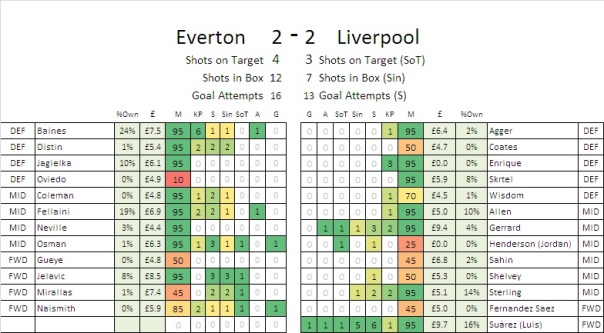 The first Merseyside derby of the season kicked off another thrilling day of Premiership and Fantasy Football. Fellaini’s return to the team was reward with an assist for those FPL managers who stuck with him through injury but ut was the performances up front of Mirallas and Jelavic in this game that stand out to me.  For Liverpool it is all Suarez.  Whilst many cite his wasteful shooting as a downside, which is true, he has so many shots that I believe he makes up for them. 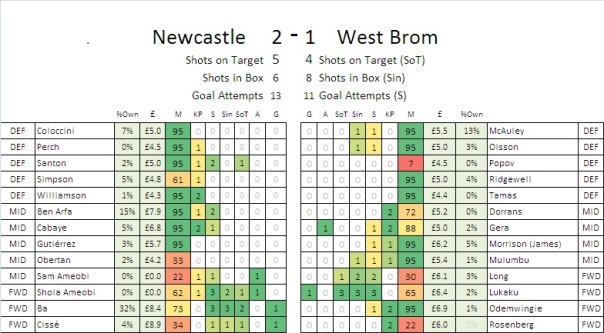 A fairly equal tie this, and credit should be given to the Baggies for a good show up at Newcastle.  I love Lukaku, if he gets in the starting XI that is, but I can’t understand Clarke’s rotation policy with this front players yet.  Demba Ba for the Magpies is just a force of nature really and if his early withdrawal with a “nerve” injury does not prove too bad expect more goals soon. 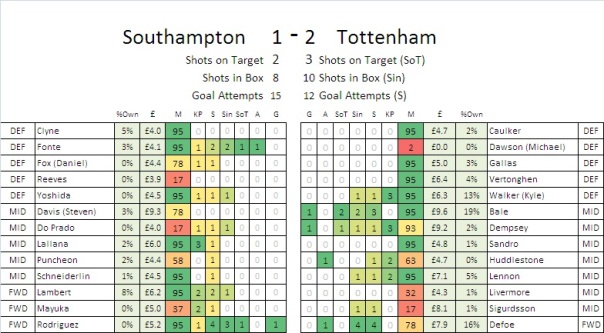 A fair few goals were expected from this game, but as the stats show, there weren’t a great deal of chances compared to an average Premier League game.  Rodriguez is slowly stepping up his game and out did Lambert here in the shooting stakes, and indeed was rewarded with a goal.  Fonte continues to pose a threat from the back too.  For Spurs, it’s Bale and Defoe again picking up FPLpoints and hogging the shooting chances.  Dempsey’s 2nd goal in 4 games is interesting too. 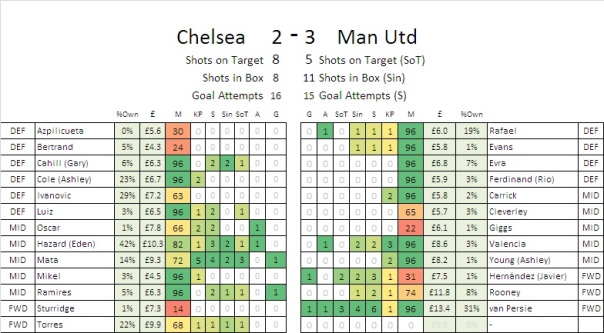 As mentioned above for Arsenal, after 9 games played now the performance of the league’s elite teams  needs a deeper analysis.  Obviously 2 red cards would change any match and makes a proper analysis very difficult, but Chelsea failed to be quite as clinical in an attacking sense as they have been so far this season. Once again Mata was central to everything they did.  Hazard was more involved than he has been in some of Chelsea’s games and picked up another assist in this game for getting fouled.  United’s Van Persie and Valancia are the only attacking players to really stand out for the visitors today from a FPL perspective and I am going to have a look at the Dutchman’s value versus point potential in particular.  Wayne Rooney’s limited attempts highlight his role as a midfielder.