GW22 The Review by @shots_on_target

Those folks who played their wildcard for a Chelsea player or two were well rewarded here, particularly with 3 assists from Juan Mata. Two of his assists were for Walter’s own goals so don’t count as key passes in the data but there’s no denying his ability to produce.  He’s made a habit all season long of playing the key pass or scoring from a limited number of chances.  It’s a sign of real quality.  Stoke managed to put in an average performance against Chelsea but all in all this was a performance of real quality from the Billionaire’s Club (no?).

So little adventure from a home side but they came away with a point. If this performance sums up QPR’s mentality against superior teams then some more clean sheets may be on the cards.  Tottenham’s ratio of shots in the box to those outside tells the same story as the Chelsea-QPR game did last week –  QPR can defend like their Premier League depends on it, and it probably does.  Bale is at least the equal or perhaps more of a threat in this team than the more orthodox strikers Defoe and Adebayor which serves to underline his value as a truly elite fantasy player.   First game in the Premier League this season too where I think a team has not made any substitutes.

A rather “average” in game in terms of the stats but there are a few important things to take away.  First of all, breaking news….  Van Persie is sweet fantasy gold.  The rest of United’s team is quite unusually well off the radar.  If anyone one emerges from RVP’s shadow be sure to get a quick look in.  And talking of shadows, this performance from Sturridge may serve to at least obscure Suarez’s flame as Liverpools prima donna attacking force.  Equivalent shots and chance created, twice as many shots in the box and his team;s only goal promotes Sturridge up in my rankings to very interesting indeed.

Swansea’s performances in games like this really showcases the tactical subtleties of Premier League football.  Not for the first time Laudrup’s team have shown that, when they want to, they can defend against the best attacking teams in the league.  Everton too, and unfortunately for their supporters fans, also demonstrated that when it comes to breaking down a team they have not reached the dizzying heights of attacking, creative football, no matter how taller Fellaini’s hair gets.   The Belgian remained amongst the Toffee’s chief threats though, as well as the off-target Jelavic and the overlooked Anichebe.

The highlight from this game (and yes there was one) was Cisse’s low overall share of the visitor’s opportunities.  I expected that, in Ba’s absence, and given the role reversal between the two last season as Newcastle’s point striker, and his compatriot’s absence that Pappis Cisse would profit from a significantly increased share of shooting chances.  Not so, at least from this game, albeit a tricky away game and not one from which to form firm conclusion. 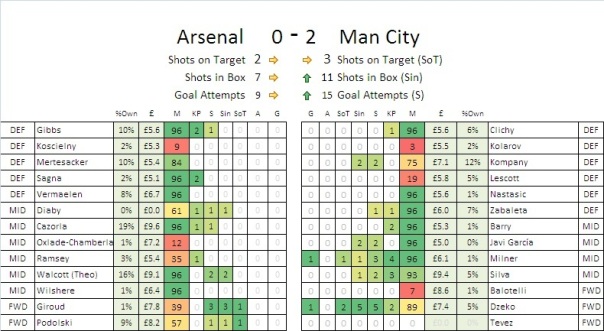 It’s always difficult to assess a game where a player is sent off so early.  Arsenal managed an average league performance against City, as indicated by the yellow arrows, which is not bad with ten men you’d have to say.  However, I’m not convinced.  Giroud has their most shots as a sub in the last third of the game when the game situation is different anyway, moreso with Kompany’s sending off.  City  only managing 3 SoT  though raises a few eyebrows, although the overall stats do not suggest Arsenal were unfortunate not to concede two after they went a man down.

Sunderland score three goals, and probably just about deserved all three too.  West Ham have made a habit this season of conceding shots but only conceding them outside their box, outside the danger area.  Here, Sunderland got their chances in the box and it’s from these they had most of their chances.  McClean may be set for a resurgence in form which see’s him register the kind of interest that he did this time last season.  Maybe he likes his Mam’s Christmas dinners.

Puncheon is a constant threat for Southampton and has all but assured himself a place in the team with the unfortunate injury to Lallana.  Lambert of course scored the goal and despite a decent price rise ahead of the Double GW still represents good value.  If Villa are going to score then you’d think Benteke has to be involved.. but how many will they score?

Personal story – I was at home quietly congratulating myself on backing West Brom’s goalie Foster for a Clean Sheet in my team when #BOOM# from 0-2 to 3-2 in no time at all.  Whereas Reading’s shots where spread incredibly uniformly amongst their players the Baggie’s played everything through the enigmatic Lukaku who’s now scored 9 goals in 947 minutes, that’s essentially a goal per game.

Several weeks ago I was of the opinion that Fulham were a decent attacking team, one that ultimately may struggle to pick the lock of an out and out defensive team, a la Stoke, but still a team that were prepared to take the game to the opposition, to create chances, and to score goals.  Wigan are exactly the type of team against which I’d expect Fulham to flourish, not necessarily win, but create chances, and score goals.  Even an early goal in this game could not give Fulham a platform to push on.  Wigan’s form over the last 4 has seen them make an improvement on their early season performances and Di Santo built on a run of games back in the team with a top game, admittedly  though in the absence of Arouna Kone.