← Manchester City, Everton and Stoke feature in the Boxing Day Preview
Lingard Too Good To Resist In Fantasy Football Stakes →

It feels like ages since I’ve sat down to pen an FPL column. (Ed. A full 4 days John) Are Leeds still in the Champions League? (Ed. No John) Liverpool recent top-flight champions? (Ed. HAHAHA you joker) A young Gigi Buffon just breaking into football? In the nearly three days since last you’ve read what I wrote about Jonjo Kenney (6pts and another cleansheet), the Liverpool midfield (fire, as always) and Captain Candy Kane, the football world has been set alight with CALENDAR YEAR RECORDS! DEFENDER PRICES FINALLY INFLATING!! MANCHESTER CITY STILL GOOD!!! With all that’s changed, or hasn’t, this is a good time to remind you that your Wildcard Chip 1 needs to be used before the deadline this week. And so: all these players could (and should!) be in your XI. (Note: No match for Spurs or West Ham, DGW22 for both)

Kolasinac hasn’t played since GW16, having missed the last three matches before Thursday’s match with Crystal Palace. This is written and submitted before the game, but with Monreal’s ankle injury likely to sideline him until GW23, Kolasinac should start Thursday and again against West Brom GW21. A goal and four assists from 1297′ is a solid return. Facing a Baggies side which has shown little attacking competency is even better. Arsenal won 2-0 in the reverse fixture with Kolasinac picking up 6pts. The only word of caution? All of his attacking returns have come at home.

Watford have acknowledged that their young Brazilian. 20-years-old and full of boundless energy may be a nice narrative, but 16 times he’s gone the full 90′ in the League with just five midfielders logging more minutes this term than his 1721′. Swansea must be seen as an opportunity for three vital points as the Hornets look to keep pace with Everton and Leicester. With those minutes comes increased expectation of production  and Richarlison has proved capable. He is third in the League with 65 total shots (Kane – 116; Salah – 75). 44 of those comes from inside the area. 5 goals, 7 fantasy assists and rated a midfielder? Sold. The only negative is the paucity of BPS – only 4BPS on the season and none since GW6.

The trip to Huddersfield will be a defining moment for Sean Dyche and the Clarets. Separated by 10 points, but just four places in the table, this will be as vital to staying in contention for Europe as the visit from Liverpool just two days later. Despite my best intentions for Zanka and Schindler, the Terriers are without a cleansheet in their last four, having allowed a single goal in each of their last three. Burnley have been blanked in two of their last five, but put two past Manchester United last match and could start this one of the front foot. With Chris Wood still recovering from injury and Barnes having scored at Old Trafford, the forward should keep his place. £5.2 for your FWD3 means plenty in the bank to bring Harry in ahead of the DGW22.

The Blues will play at home against Stoke on Saturday and don’t have another match until the clash with Arsenal the following Wednesday. Hazard got a break to start the season and without any notable travel for these two games should feature in both. 68′, 73′, 90′ and 72′ over the past four have come with a cost, just 15 total points and a single assist to show. But the OFPL game is flawed and Hazard has dominated these matches. In those same four games he scored: 12, 17, 18.5 and 12.5 pts with 11 chances created, 19 successful take-ons and four shots on target. Chelsea have not conceded with him on the pitch since the shock 0-1 loss at West Ham. Liverpool and City will play rotation games in this one, Hazard is a lock to start and score against Stoke.

Picking a midfielder from the Liverpool v Leicester match likely means splitting hairs over Salah / Coutinho / Mane. But Riyad deserves consideration not only for this match, but moving forward. £8.5M, and 7.3% selected are crazy low numbers for the fourth-highest scoring midfielder. Mahrez’s 107pts are level with Christian Eriksen, more than any other midfielder save Salah (£10.1, 59.2%), Sterling (£8.8, 31.4%), and KDB (£10.3, 25.9%). Liverpool have been markedly better defensively at home, but Mahrez can strike the ball well from anywhere and Simon Mignolet has been shaky on long shots this season. Might not pay off this GW, but getting in Mahrez now is good value for January. 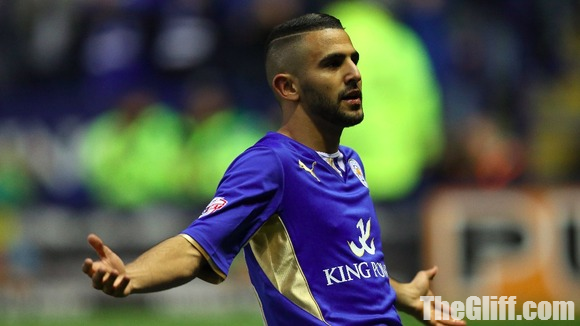 Probably time to point out that Marko Arnautovic, West Ham will be my selection for this spot next week as the DGW22 for West Ham means that David Moyes favored giant will be leading the line against West Brom and Spurs. But this week we’ll focus on another of the frequent topics of Talkin Togga (soon with new Branding!) MikeP’s favourite player – Sofaine Boufal – and my own – Nathan Redmond – aren’t on the pitch together much. Versus Spurs it was Tadic who sat, giving the Boufal/Redmond tandem a run. It wasn’t until Tadic came on (63′ for Redmond) that Saints sparked to life, each of Boufal and Tadic scoring. They should start this one, likely will be given ample space to operate through midfield and will need a bit of something special to be valuable in OFPL. But in Draft? Those key passes, successful dribbles and shots will all rack up points.

← Manchester City, Everton and Stoke feature in the Boxing Day Preview
Lingard Too Good To Resist In Fantasy Football Stakes →