← Liverpool, Brighton and Newcastle make the Preview – No Brexit, No Trump
Everton, Man City and Watford Make The Gameweek Preview →

Liverpool: A League of Their Own

The Gameweek 12 FPL Review: by @JackAGoodwin

As someone who clearly doesn’t take my FPL team/life too seriously I find joy in the seriousness and almost unbearable amount of insight and scrutiny the FPL world place on players and their ability on the pitch. I sit back and watch the FPL world crumble for a day when City fire blanks, I chuckle with delight when I see Liverpool concede a goal and I cry tears of laughter when a top picked captain bags a yellow card and 59 minutes of playing time.

Watching those around me fail and revelling in it – in essence – is what makes me British (don’t worry, I am not going all political, save that for Niall!). It’s why Jeremy Kyle was incredibly popular. It’s why we love to see our local police force take 8 attempts to break in the neighbour’s door before coming out with a used syringe and tiny bag that maybe-maybe doesn’t smell of cannabis. As a community we find solace together when we see a cocky lad get red-lighted by all 30 ladies/things on Take Me Out.

This week I decided to envision all 10 of GW12’s fixtures as our beloved TV Game Shows, because fundamentally, they’re about nothing more than the joy of us viewers watching stupid people get easy things wrong. Whatever happens during the weekend’s football we sit there in the pub, pint in hand, yelling out killer tactics that we learned from FIFA. I picked shows which held some substance to the result and tried to painstakingly round up the gameshow in a way which reviews the result to help you on your FPL journey past the International Break.

So, pass the remote as we go through the 10 FPL TV Game Shows for GW12…

A fitting show for Farke & Pukki to appear, as they’re literally pointless. Both in the sense of losing the weekend fixture, but also that they continue to convince each other that there’s a party going on (guys, it moved back to Leicester!). Watford fire easy shots at Norwich, “name me any other Norwich player other than Teemu Pukki?” Pointless answers only please! Pukki crumbles. Sky Sports reported that after the game on Friday night he was seen in the local Wetherspoon’s crying in to a £2 pint of lukewarm Fosters. He’s been ruined by this party, he didn’t even want the party in the first place!

Result – Norwich walk away with nothing, Watford retain all 3pts to roll over to the next GW (0-2).

Prize – Pukki received a Pointless trophy which he left in the Wetherspoons bogs.

With results over Man United & Arsenal already this season, Palace are somewhat of a maze to tackle. Unknowing whether ol’ Roy will deploy his side in Aztec formation, industrial, futuristic, teams have to adapt to where Zaha and Ayew inevitably leg it off to on the pitch to attempt several step-over each possession. Luckily, Lampard watched the show as a kid in the late 80’s and knew all possible outcomes! Roy could only watch as Chelsea took all the gold leaves leaving only silvers behind.

Prize – Richard O’Brien appeared with Mumsie to give Frank a big sparkly crystal and a harmonica. Aww, nostalgia.

This one, purely to see Pellegrini’s massive head on Warwick Davies’ body. But still, quite the fit. West Ham are in fact terrible now, it was a toss-up between this gameshow and the Million Pound Drop where I would have had Seb Haller as the Million Pound Flop. Burnley in fact were below the Hammers prior to the game but have shown signs of life still as they climb from the slums of the table.

Result – West Ham failed to find one, let alone ten reasons why we should care about them (3-0)

Prize – Look below. Look at that picture. THAT is the prize. You’re welcome. 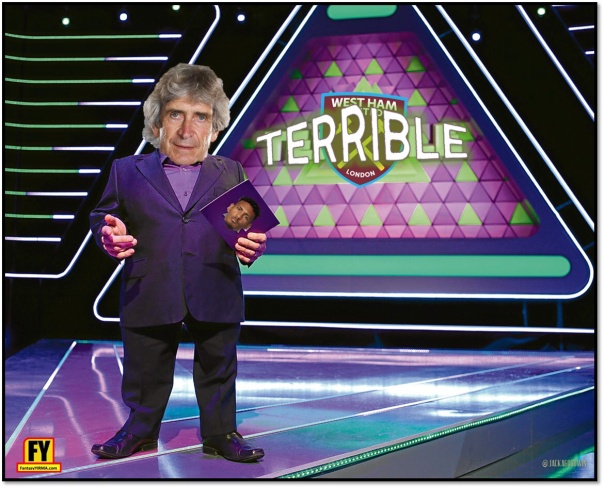 Finally, Newcastle are turning up, nice to see you, to see you…! A conveyor belt of action as both teams clearly wanted to win the cuddly toy. Bournemouth took the lead early on, but Brucie knows best and his lads kept pushing until they grabbed an equaliser to go into the break. Nothing changed in the 2nd as Newcastle kept on attacking and as per the show title, this was very much a match of generations with young v old as Brucie gave Eddie a clinic in home advantage…didn’t they do well?

Result – Sports Direct employee’s the world over rejoiced as Newcastle won all the points…and what do points make? (2-1)

“What a cracking analogy Jack” I hear you scream thanks y’all. Both Silva & Hassenhuttl are literally walking on ice at the moment as both look to repair terrible starts to the league. The match starts but keeps getting interrupted by Philip Schofield and a pissed Holly Willoughby as they snigger over Ralph’s surname. This distracts Ralph. Everton capitalise as Davies & Richarlison pirouette around the Saints defence still devastated that their best friend Van Dijk left them. Cracks appear, and it appears that Southampton’s trip to Arsenal in a fortnights time may be Ralphs final dance.

Prize – Silva’s prize is keeping his job, a loss here would’ve been disastrous for the Toffees. 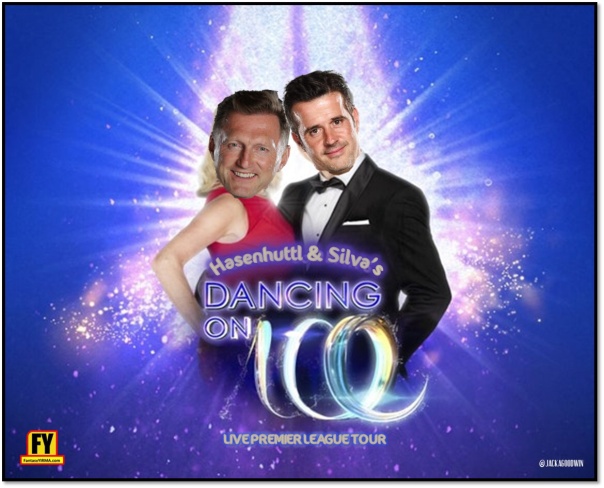 The symbolism in this one astounds me. Imagine if you will (or look at the picture), Pochettino’s head is in the Tipping Point machine. Should it fall, he’s sacked! Each counter dropped into the machine represents a loss for Spurs this season, and boy is it pushing Poch forward…Sheffield United came along and yet again another counter pushes Poch ever closer. How many more counters will this take? West Ham, Bournemouth, United are the next three, I believe 2 more counters see’s Poch fall. On the flip-side of the result, Sheffield are baffling right now, what the hell is happening! 5th in the league, and next up (I am scared), they host Man United.

Result – Sheffield STILL keeping up their 2015-16-Leicester-like form with a hard-fought draw. (1-1)

Prize – The star counter and a Europa spot for the Blades, Spurs now only 6 points from relegation. 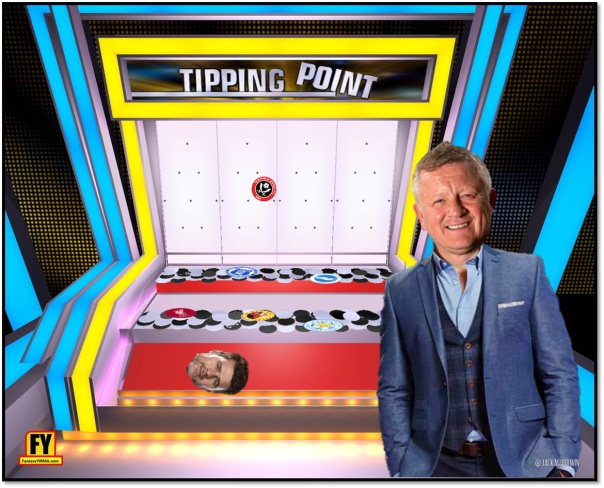 Unai the poor sod, he can’t get anything right can he. Arsenal’s 4th match without a win as they blankety blank against the never-ending Vardy Party. Leicester of course are not an easy side to beat – they’re 2nd in the league for good reason, Rodgers is building something Claudio-esque and it’s fascinating to watch. Boxing Day will be like Christmas all over again as Leicester face their biggest test in Liverpool, looking for retribution for the 95th minute winner conceded at Anfield.

Result – Leicester cruise past a demorolised Gunners side (2-0)

Fired – Unai received the coveted Blankety Blank consolation prize, a chequebook & pen. Let’s hope he is still there to use it in January.

Channel #8: (Ole’s at the) Wheel of Fortune (United v Brighton)

Much like the gameshow, nobody quite knows what team or result Ole will land on next. Fortunately for him, this week landed on the United slot so they took the win. It really is this simple with United at the moment, one week they tame the Liverpool giants the other they lose to Newcastle. Only the first week of August has Ole hit the “JACKPOT” which would is his 3 sides all winning in the same game week (United, Cardiff & Molde). Brighton look alright, and likely to have enough equipment to keep spinning in the wins and maintain Prem status come the end of the season.

Channel #9: I’m Dean Smith, Get Me Out Of Here! (Wolves v Aston Villa)

The Premier League is a much bigger, harsh jungle than that of the Championship. Dean Smith is figuring that out. Back in the Championship he was a Villa hero, taking them from 14th to playoff victory. Now, he’s being booed by the away fans and is stuck in an endless bush tucker trial which isn’t going to get any easier – he’s refusing to eat the testicles over and over, Jeff! Wolves are still in the Europa hunt, still look half-decent and are comfortable here in the jungle (Nuno will eat anything).

Channel #10: A League Of Their Own (Liverpool v City)

There isn’t much else to say other than the picture tell you everything you need to know about this one. Liverpool, much as it pains a lot of people, are finally going to win the Premier League title in my opinion and do so in some style. They are literally in their own league in terms of skill, confidence and importantly concentration as they march on up – opening the gap at the top to 8pts. Pep needs to inject something different into his players, they’re 4th, stuck in an unknown position looking to brush off these results and become a powerhouse yet again.

Prize – Team Redknapp take the W which see’s Jack Whitehall blown out of a cannon into a basketball hoop – the crowd love it. 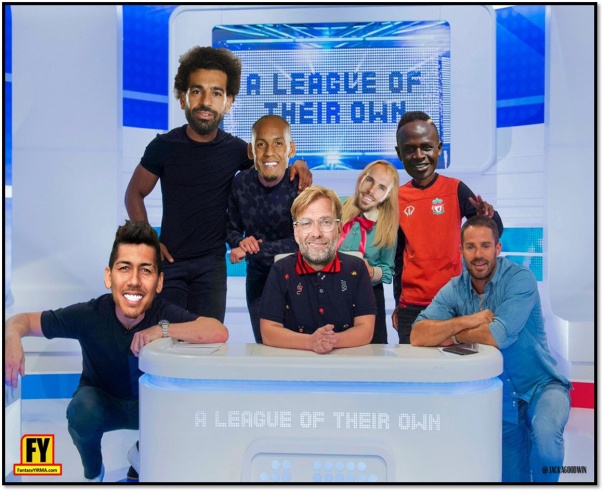 ← Liverpool, Brighton and Newcastle make the Preview – No Brexit, No Trump
Everton, Man City and Watford Make The Gameweek Preview →