On paper, three months of no football, no FPL, is ludicrous… Finding yourself tucking in to yet another boxset your other half chose or getting to know your family members on phenomenally awkward Zoom calls can only take you so far.

With no Premier League to review – for now – I find myself in a weird lull. Too much time on my hands, no nagging from @FantasyYIRMA, I’ve many more hours of my day where I am not looking for hilarious photos to ruin or angles to take my articles.

Nevertheless, it’s only fair you at least hear from me prior to the Premier League’s return in just three weeks – a period of time I no longer understand as each day passing is another day zero in the Goodwin household.

So, here’s an experiment, I’ll review some “match-ups” we’ve seen, experienced, heard of whilst we’ve been locked up all these months. Never has one of my wild experiments made me feel such vivid emotions, because that’s exactly what re-watching Tiger King or exploring who Mr Cummings really is has done to me…

The plan, on paper, seems absurd. VHS quality repeats of England failing – we’re still getting over 2018! 4:3 aspect ratio, Bob Wilson, zero modern analysis of the game. And still, I clenched my fists when Shearer scored – OK maybe I am on board with this? It’s a strange feeling, watching an entire 90-minute match of which the result you already know. Mildly therapeutic really knowing what lies ahead, you can temper your expectations somewhat. So, who wins? Easy – Football. Football will always prevail even if it’s watching a moment in time where the entire country hated Gareth Southgate. My football-less life left a giant hole filled generously with ITV4 repeats and a hell of a lot of YouTube compilations.

Dominic Cummings vs The Rules

Barnard Castle must have an incredible gift shop for Dominic to risk everything to get there. His career, the Prime Ministers career, health and safety of his immediate family, the lot. All for a nice snap of the castle and a £5 postcard? I reiterate, it must be a bloody good gift shop. Unsocially distanced journalists now swarm Dominic’s house for another scoop in the story such as “it was just a trip to test my eyesight” – I for one haven’t seen my family now since the beginning of March, but, if I was actually personally responsible for the introduction of the nationwide lockdown, I’d probably obey the rules even as far as to lock my house windows “just in case”. The Rules surely win this match, that’s quite clear. Whether VAR (The Government) will overrule the rules to reword the rules to assist Dominic’s story, we’re still waiting…

Would there be a weird obsession with pierced looney Mr Exotic if the pandemic hadn’t reached our shores? Simple answer here is a big fat no. It did however, and there is. Joe captured our intrigue early on for those lucky enough to have caught the brilliant Louis Theroux documentaries years prior about his crazy tiger antics. The Netflix mini-series however spiced things up – warming our hearts to the man behind the beautiful fashion (he crafted the planet’s most perfect swag outfits). We’re on board, I am on board, I’ll sign any petition going to get him out of jail because Netflix told me he’s “an alright bloke at heart”. Carole however, killed her husband. Because, well, because Joe told me – and Joe is no liar! Imagine if you will, the year is 2030, we’ve moved on from Covid-19 and now allowed to fist bump one another. Big Brother is relaunched, and Joe Exotic is in the house! But wait, who’s this…. It’s Baskin! Tell me you wouldn’t pay money to see that and I will call you a liar. Oh yeah, the match. Joe wins. Joe will ultimately win this. I believe in Joe.

Isolation Motivation vs Every Day Lock-In’s

Get fit plans and healthy exercise OR…. OR…. Crack open a beer every night just cos? I hear ya, the second option is certainly more appealing right. Would it shock you to hear that I opted for a little bit of both? As we all adjusted to living at home indefinitely, I am sure we have that quick burst of enthusiasm at the beginning to try eating healthier (due mainly down the unavailability of good takeout’s) and maybe take Boris up on his offer for a daily exercise – cue Joe Wicks! The weeks, then months passed. Have you stuck with it? Hell, even Joe Wick had to fake an injury because he was getting sick of it all. Takeaways are back in action, and we even have Bundesliga. The fridge is ever-tempting especially with the glorious weather we’re having. Lock-In Runs or Lock-In Rums? Mine’s a double please! (I tell myself as I pour out another).

Wrestling, as some of you may know – SPOILER AHEAD – Is not a real sport. Acrobatic and aggressive EastEnders if you will. Picture Phil Mitchell wearing spandex over elaboratively drinking a can of beer and you have wrestling icon Steve Austin – of sorts. Anyway, wrestling relies heavily on the crowd, the interaction with the audience is pivotal with what “gets over” in the storylines. The crowd cut, WWE and newly formed rival company AEW struggled to adapt, one more than the other. AEW embraced it, acknowledged the changed landscape and decided to alter their program to suit – which, was kinda neat. WWE however, chose to not even mention what was happening outside of the building and put on strange shows with wrestlers still trying to hype up a crowd that literally did not exist. Weird. Weird for everyone involved. AEW wins – and set a clear precedent that you need to embrace change, accept what’s happening and adjust accordingly. Oh yeah, and Rob Gronkowski (the NFL guy) is a current WWE champion…

We’re trying though, aren’t we? Boris told us to stay indoors but go outside only when public transport is unavailable, and you cannot work from home to exercise once a day but only in groups less than one but only over 2 metres apart – it’s all very simple. How could anyone ever misconstrue those instructions? Well, turns out the British Summer has come early and we’ve all thrown the instructions away quicker than an IKEA manual after a successful wardrobe build. Pandemonium outside – dog walkers, picnic gangs, family outings and the occasional creepy wanderer – the walkways are manic. I for one want crap weather back, everyone back inside, please. For now, the weather wins this match-up. Cue a week when we’ll get torrential rain and I can walk my dog in peace.

No, hear me out here. Tom Moore, now SIR Tom Moore is a bloody brilliant man. Whilst Sam Smith and celebrities broke down over having to live in their mansions for an extended period – Tommy Boy (I like to call him) took it upon himself to raise some cash to support the Covid relief efforts. Twitter took ahold of Tommy’s efforts and it blew up – he raised literally millions by walking around in his garden. OK, all great, probably the highlight of lockdown, right? Well…Michael Scott (from the Office US) happened. He teamed up with his former colleagues to surprise Office superfans to perform a wedding dance over a Zoom call/wedding ceremony – it was delightful. So, I ask you, which is the highlight of lockdown? Tommy Boy takes it, Scott came second (that’s what she said). 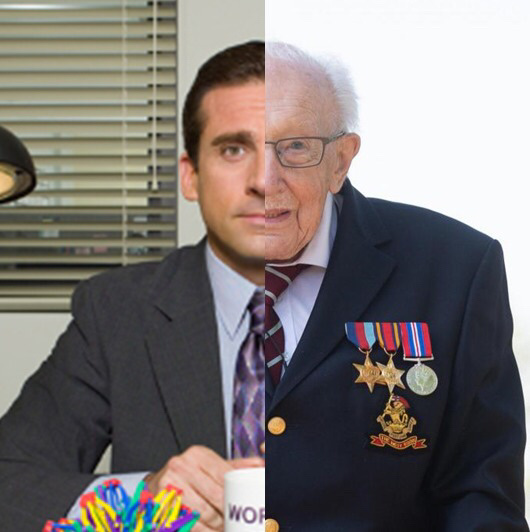 Save Money vs Spend Money

Zero commuting, no lunchtime breaks to WH Smiths, no pints after work, no company away days, no takeaways/fast food far too regularly – lockdown will save us thousands! This was the sentiment shared by many when it started. Remember that? Way back at Easter time. I for one stocked up on Easter eggs which lasted the best part of the first lockdown weekend. Then, eBay happened. Amazon happened. Online slots. Anything available to spend money on we were all suddenly piling towards just to get a whiff of reality. eBay didn’t last long as sellers caught word of demand and upped the prices – nobody will pay you £50 for a poor quality Squirtle Pokémon card good sir. Anyway, eBay aside, money has not been saved – Amazon has me by the knockers as delivery upon delivery arrives each week to my joy and my other half’s despair – yes love, we DID need this bottle of whisky, it was £5 off?!

No FPL vs FPL Alternatives

When the FPL world halted, FPL Twitter did so too. I should probably preface this one by admitting that I was getting burnt out from FPL at that stage anyway and the breaks been quite a pleasant one for me – I do however sympathize with you guys who were taking FPL seriously and succeeding in the season so far, a little bit. So, what to do? Do we take the break, accept it and find other hobbies like painting or talking to family? Or do we embrace the alternatives flung our way from our friends within the FPL community? FootStock – which I see as a profitable adult footballing version of collecting Pokémon cards. Fantasy Champ Man Simulator which filled us all up with lovely nostalgia as we selected icons from Premier League history. Indulged in FPL Podcasts where the hosts have tried to fill their time with meaningless chit chat over what-ifs, dream teams, fantasy drafts and “filler” content (naming no names).

Or maybe even you gave the FPL Games a go (a short-lived series of challenges I instigated on Twitter). More recently, the Bundesliga returned, FPL managers flocked in the thousands to create a Fantasy Bundesliga squad for the games remaining – I for one didn’t jump at this, as a huge Gladbach fan I couldn’t put myself through it. So, who wins? I truly think this one ends a draw.

Whatever you chose to do with your time over the last few months I hope you’ve been happy, safe, and kept busy. The FPL community is hot when FPL is hot, this has truly tested us all in how we adapt to it – not least those accounts whose sole intent is to provide FPL content, we’re back up and running very soon don’t worry!

One last thing though if I may. FPL is a game, it should be fun – I know many of you take it serious either because you’re really good at it or you have high stakes on the line. I don’t intend to share any insight (I’ll leave that to @NiallHawthorne) or really hand out advice for your teams – consider me your comic relief from the serious chitter chatter.

Enjoy the next couple weeks of tweaking – I’ll see you on the other side of the first gameweek back!