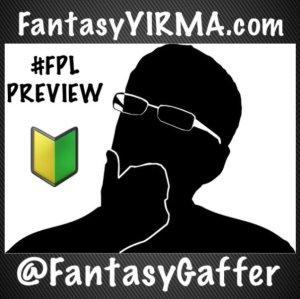 You can read the FantasyYIRMA Gameweek 13 Review HERE

If you recommended Tripper, Pogba, Jesus (C) and Benteke last week, the midweek is a salient opportunity to find a replacement author for this column. Oddly, I’m still here. Much like the Toffee’s caretaker manager, I cannot be sacked.

The defender has benefitted from back-to-back cleansheets to lock up 6pt performances in GW12 and GW13, but it is the ever-present chance of offensive returns that tips the scales here. Interestingly, he did not create a single chance in the last three fixtures – recording 0 key passes against City, Spurs and Burnley. But two key passes against Swansea, three versus Brighton at the Emirates and two more when the Gunners hosted the Cherries back in GW4 show how and when his attacking value comes. This midweek, coming off a hard-fought 0-1 away win and facing a promoted side? Great opportunity.

Hazard has only played in 10 matches but already sits 8th in Togga’s scoring for all midfielders. I’m using that as the barometer because that format scores key passes, successful dribbles, etc. which lead to goals/assists and also underpin the OFPL ‘bonus points’. After failing to create a chance against West Brom, Eden was electric against Liverpool with six chances created (including an assist) and had nine (9!) successful dribbles. he’s created 22 chances (including three assists) in this last six League appearances. He’s a great shout for Captain in the midweek, as well.

Jesus was left out of the starting XI for Pep’s side in the UCL clash but did make a substitute appearance with fellow young stars Phil Foden and Brahim Diaz. He should start here. When he starts here he’ll be odds-on to score against Huddersfield Southampton. Before Sunday, Jesus had eight goals in 688′. That’s better than a goal every 90′. He’s starting. He’s scoring. That’s all you can ask. If this looks familiar, it’s because I copied it from GW13’s “Captain” selection. The advice is the bees knees and I’ll not let some front-running, superstar-dependant, FPL-taunting baldy undermine my a-THOR-i-tie.

Firmino was rested against Chelsea. Liverpool are playing Stoke. Firmino scores goals like this against Stoke:

*disclaimer* I am on Bobby Digital’s payroll.

Shaqiri is £6.0 and owned in only 5.9% of sides. Overshadowed by The Equation (eh? eh? pretty good, right?), Xherdan has been devistatingly efficient this season. Two goals and three assists in his last four have seen Shaqiri notch 42 points with 5BPS included. He’s level for most goals (3), leads the team in assists (5) and BPS (7). This is the Potters thought they were buying and if his health holds he’s a great add not just for GW14, but the season.

If you play the OFPL you likely know who Pascal Gross is, he’s 20% selected after all. But it is Davy Propper who is the sneaky-good play against Crystal Palace. Propper only has three assists this season and sits behind both Gross and Anthony Knockaert in the draft ranks, but he had 16pts against West Ham, 19.5 against Stoke and has been markedly better at home of late. Any of the three Brighton midfielders mentioned here are excellent draft starts in midweek, but with just 12% ownership in Togga – Gross 90%; Knockaert 64% – Propper is the one you’ll be able to find off the waiver wire and start as your MID3/4 in a compelling fantasy clash against the Eagles.