← Fantasy Football Review: Double Digits for Liverpool’s Matip?!
Aguero Back For Man City? Not According to Ben Dinnery or Pep →

The big news this week has been the launch of the COVID19 vaccination programme in the UK, which will be imminently launched through the rest of Europe and the world very soon. We finally have light at the end of this long, socially-distanced tunnel.

To those of you reading this who also read other dodgy online material (to know thyself is the beginning of wisdom, as Socrates once said. Good philosopher, cracking midfielder) I urge you to ignore the anti-vax guff. Vaccines are good, and a whole lot of us wouldn’t even exist if they weren’t bloody brilliant at keeping away a mild dose of deadness from our forefathers.

Y’see, it’s not about you, per se. It’s about ‘us’ as a society. Some might get a reaction from the vaccine, most will not, but overall as a society we will all protect each other. So, step up and take one for the team. Most of us have done that for each other this year as we kept our distance and cut down our interactions. One last step is all that’s needed.

In any case, I don’t mind if Bill Gates gets to control me. I can’t even decide what to have for dinner most days, so a bit of help will be most welcome. Also, I can blame him for any and all duff FPL decisions I make in the future.

Fresh from his second assist of the season to go alongside his four clean sheets, KWP now faces shot-shy, onion-bag-avoiding, vaccinated-against-scoring Sheffield United.

Just five goals in eleven games this season for the blunt Blades, led by Jurgen Klopp’s best mate Chris Wilder. I find it ironic that Chris Wilder’s father Gene starred in a movie called ‘See No Evil, Hear No Evil’.

Moving on, Kyle Walker-Peters has a great shot at another clean sheet this week, and has shown he can be a threat going forward. We really should sit up and take notice of this young talent. Both his father’s, Kyle Walker and Andi Peters are really very, very proud of him.

Thankfully we’re hearing that Wolves star-striker Raul Jimenez is making a good recovery from that sickening fractured skull he suffered a couple of weeks ago. Hopefully he’ll be back complicating FPL forward decisions as soon as possible.

In the meantime, the FPL community are left pondering how the Wolves frontline will be affected by the absence of their ever-present forward. Last week at Anfield Wolves boss Nuno Espirito Santo deployed a false-nine, false-forward line, false-team and false-diving centre-half (I see you Conor Coady…) to not much effect.

He may decide to throw in Little Lord Fauntleroy / Lynx ad kid (aka Fabio Silva) but whichever way he sets up I suspect that Pedro Neto will be in a very advanced role as he has been all season. Three goals and three assists thus far as he faces a Villa side who have developed a nasty habit of leaking goals recently.

I’m not saying that Newcastle United have had an issue with the pandemic, but the rumour is that the pre-match press conference this week will be held by Dustin Hoffman and Morgan Freeman in haz-mat suits.

However, assuming all is well, I have a suspicion that Callum Wilson is the man to have this weekend as West Brom roll into town fresh from a shellacking at the hands of Crystal Palace. Granted, they were down to 10 men because Pereira played footsie with Van Aanholt’s twig and berries, but they still shouldn’t capitulate like that.

In eleven matches this season the Baggies have conceded 23 goals while their goalkeeper Johnstone has made 46 saves. So that’s 69 shots on target, and an average of 1 in 3 finding the back of the net. So, all Callum should do is have 9 shots on goal and he’s going home with the match ball.

Mo Salah, fresh from what I can only presume will be a full week’s rest (I’m writing this before the Liverpool team is announced for the dead rubber v Midtjylland), against the second worst defence in the league.

I mean, there’s only one option, right?

Ed: Salah naturally went on and played the full 90 mins of course in the dead rubber match up  v Midtjylland 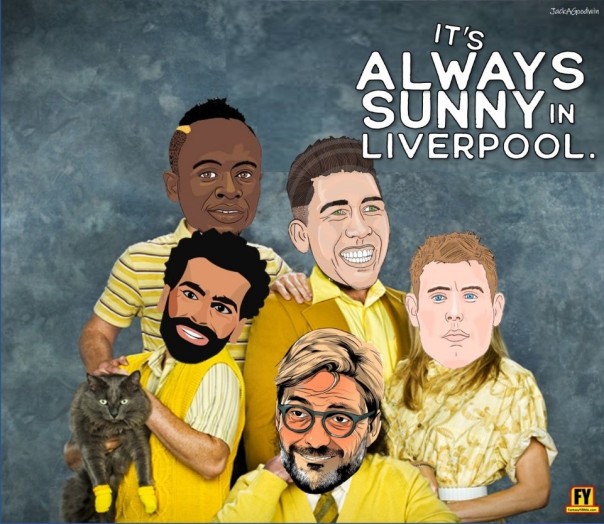 I don’t make the rules, I just follow them.

I think that’s a reflection on every single one of us, don’t you?

← Fantasy Football Review: Double Digits for Liverpool’s Matip?!
Aguero Back For Man City? Not According to Ben Dinnery or Pep →