‘Festive Football’ is a lot like Christmas itself these days. It’s just one day, on Boxing Day / St. Stephens’ Day / December 26th / Thursday (or whatever you call it yourself). That’s the day when an extra round of league fixtures is put into the calendar that causes what the media like to call ‘The Hectic Festive Period’.

Yet they’ll have you believe that ‘Festive Football’ starts weeks earlier. I’m almost certain I saw Sky put snowflakes on a match promo in October, but I’m damn sure they call it ‘Festive Football’ from December 1st. Which is nonsense. This weekend’s football isn’t ‘Festive’. It’s actually the weekend most of us are most likely to miss as we’re hauled around god forsaken shopping centres with wild-eyed shoppers ready to murder their own family to get 5% off that sheepskin drape that Nana Smith might like.

You know what? This might be the weekend to miss the football, because after careful examination of the fixtures, it’s a pig of a week for FPL. An absolute nightmare. You’re as likely to see fourteen clean sheets as you are none, and Mystic Meg hung up on me when I asked her to pick my Captain this week.

So, without further ado and/or waffle, let’s see what GW18 has in store…

Bonus Content – Ryan @FantasyYIRMA had the opportunity to interview International Goalkeeper, Fantasy Football Nut and All Round Good Guy, Asmir Begovic – you can listen to the interview here.

While at first glance this may seem like a kneejerk reaction to that amazing win and clean sheet at Stamford Bridge last weekend, there is some kernel of logic embedded in this pick.

Bournemouth are, and always have been, a streaky team. They go on great runs of form when they can beat most and that has usually lasted long enough to keep them safe for another season. They also go on horrific bouts of being gash whereby they are easy pickings for opponents. Up until this season this was accepted, and nobody really questioned Eddie Howe about it. Yet nobody should ever question Eddie Howe about it. It’s Bournemouth for f*ck sake. Yes, we’re now familiar with them in the Premier League, and you could almost claim that they’re ‘established’. Therein lies the reason why he should never be questioned. They play at Dean Court (don’t let ‘The Vitality Stadium’ fool you), which is a tiny regional ground on the coast. I mean, look where it sits on the list of English grounds from highest capacity to lowest:

I don’t see Walsall or Gillingham or Rotherham in or anywhere near the Premier League. Eddie Howe is an actual miracle worker, and I reckon he’s about to embark on another run of form that will keep them safe.

All aboard the Rico Express! 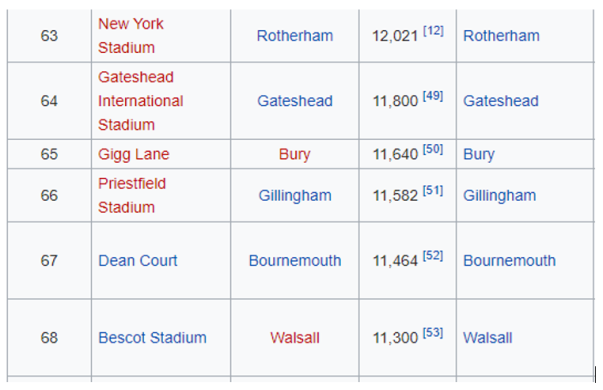 Spurs host Chelsea in an eye-catching fixture this Sunday afternoon, and you just know that Jose will have his troops bang up for this one. He’d love nothing more than putting one over his ex-employers, and he certainly won’t want his protégé and former superstar midfielder mugging him off.

In the last nine GW’s Dele Alli has returned in seven of them, with five goals and two assists to his credit. Chelsea are on a poor run of form themselves with defensive issues to the fore (one clean sheet in their last nine GW’s).

Son is the hot choice at present, but with approximately 10% less ownership and £1.4m cheaper, Dele may be your Alli-way to success.

There wasn’t only one Premier League striker on a run of consecutive scoring games going into last weekend. Danny Ings had bagged in five consecutive games himself, before somehow drawing a blank against West Ham, thanks to a crossbar and some bad luck.

This week he faces a trip to Aston Villa who are much buoyed after pushing some children over and taking their sweets from them in midweek. However, the Villains are without their talismanic defensive leader Tyrone Mings, and could be vulnerable.

Speaking of scoring runs coming to an end…

This weekend Manchester City host Leicester City in a titanic tussle between distant second and distant third that will go a long way to deciding very little. Heh.

This is a game that to me seems made for the way Leicester City like to play. Manchester City will come at them and try to force the issue, leaving the lightning quick break away option for Maddison, Tielemans and Vardy to exploit.

We know that the Manchester City defence is as tight as Boris Johnson’s grasp of the truth, so this game will have goals. Plenty of goals.

When Big Dunc was in his pomp, he had a British fullback with a wand of a left foot pinging set pieces at his bonce with gay abandon.

When Lucas Digne suffered that injury at Old Trafford, on strode a British fullback with a wand of a left foot to ping set pieces at the bonces of Everton players once more, and it led to a goal almost immediately.

It was enough to get the Union Jack fluttering in Duncan’s heart as he turned to the bench for yet more good old British replacements, and threw on young Mossie Keane…until someone told him he was Italian, at which point he whipped him off. True story.

Leighton Baines is an FPL legend, has 0.2% ownership, and may well be available to ping set pieces at the heart of that Arsenal defence. Luvvly Jubbly me ol’ China.

When your Achilles heel is breaking down teams that sit deep, then taking on newly galvanised Watford under Nigel Pearson is not what you need. Watford frustrated and rattled Liverpool last weekend, and they won’t be daft enough to come at United and expose themselves to the counter-attack. This just reeks of yet another step back for United after they took two positive steps forward in recent weeks.

Kiko Femenia may well be a regular in a newly-steeled Watford defence for the remainder of the season.