Ed: We’ve gone past the point where I need a disclaimer…anyway… off you go Jack

Some truly magical scenes were witnessed in Manchester city centre this past weekend – with my 32nd birthday celebrations well underway there were tears, spilt drinks and many pub sports being played across the northern quarter area. Tangled somewhere in the knot of this opening paragraph is an idea I have for this week’s weekly review, but – very crucially – not that clearly.

10 games played in GW7, 10 Man of the Match awards, 10 opportunities for me to go completely off tangent in a unnecessarily farfetched attempt at making sense of the Premier League games…In this week’s review I will focus on those MOTM winners and explore why their birthdates are a CRUTIAL reason behind their success this past weekend…. ok *takes breathe*, here goes…

Despite Sheffield United losing 1-0 to Liverpool, the man of the match went to Blades player Fleck who was unfortunate not to both score and assist in the game. John shares a birthday with non-other than movie superstar Rupert Grint aka Ron Weasley (gingers, right?). Both completely overshadowed by other, much better blokes around them (Weasley < Harry Potter, Fleck < John Lundstram). They find solace in the face that sure, people need them around, but do we truly care if they get killed off? 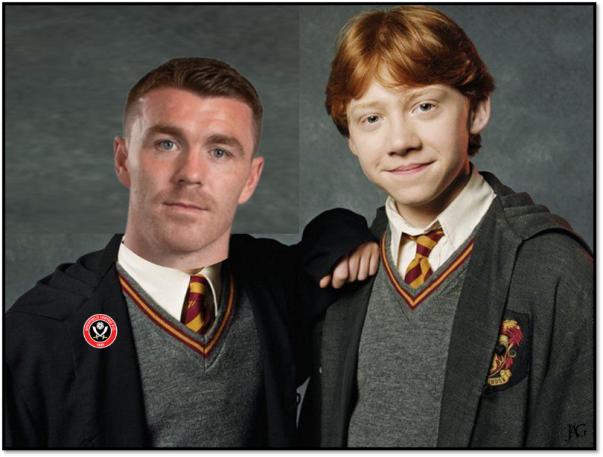 At the heart of almost everything in the 2-2 draw between Villa & Burnley, scoring a goal to match his brilliant performance is John McGinn. He’s in fact best mates with his birthday brother from another mother Jean-Claude Van Damme – if you look really closely to the exclusive behind the scenes photograph I found from the set of Street Fighter the Movie you’ll notice McGinn is there beside his best pal (also in shot you’ll see Grealish & Mings who were fortunate to get cameo roles – both died in the movie). 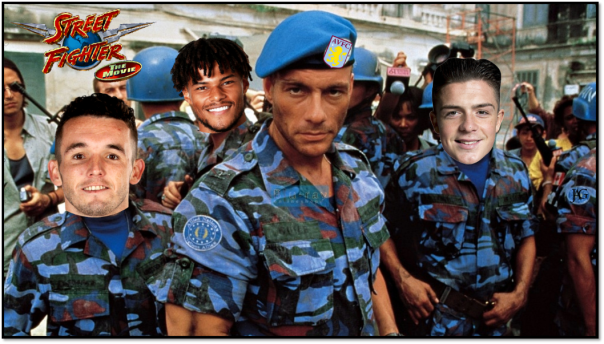 If there was ever a relatable birthdate, it’s Andriy’s! He was awarded MOTM for his brilliant display in the 2-2 result between Bournemouth & West Ham in which he scored a goal and contributed massively to the Hammers 2nd. He shares a birthday with footballing Icon Pele (who is actually called Edson Arantes do Nascimento – so they both have confusing names). Yarmolenko is quickly becoming a force in the Prem, sure he’s no Pele, but since this photo was taken Yarmolenko is yet to wash his right hand and has scored 3 & assisted 3 goals – coincidence? I think so, yes. 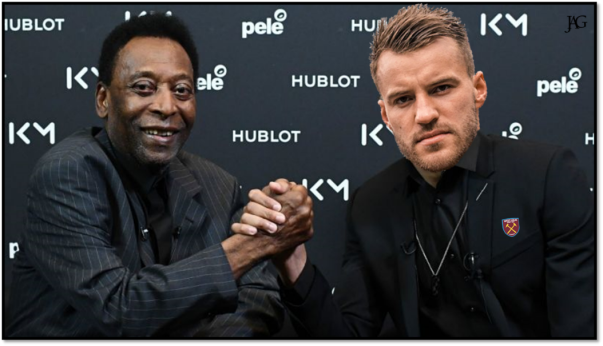 It’s the first time this season that he has scored more than 2 fantasy points (of which he’s only achieved twice), however Willian surprised many with his first goal in 8 months for Chelsea in their 2-0 victory over Brighton. Much like his birthday brother and close pal Bill Skarsgard however, nobody really wants Willian around anymore. He used to be likeable, approachable, you could even say you liked the guy. But ever since Bill adopted the role of Pennywise he just keeps hanging around Willian, creeping everyone out. Just look at poor Willian’s face, he’s devastated. Hanging around with a clown all day. Bill of course loves it, drooling all over Willian’s feet and jumping out of really small cupboards all the time. 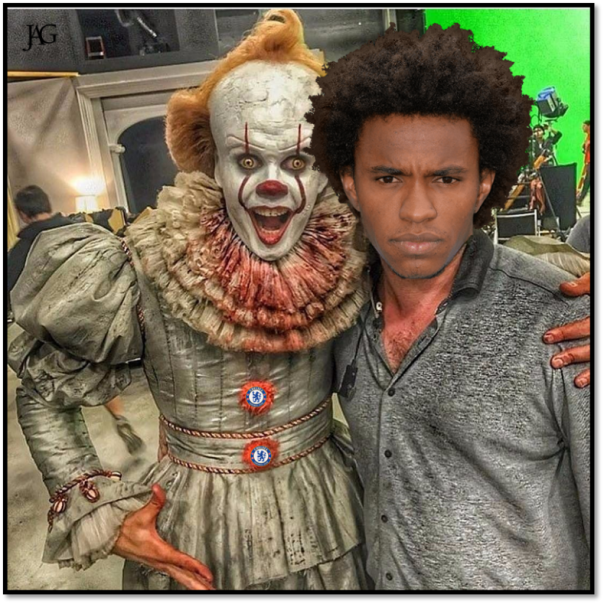 After a MOTM performance in Palace’s 2-0 victory over Norwich, Wilfred Zaha quickly rushed home to prepare for his next acting gig. That’s right, Zaha (who shares a birthday with co-star Tracy Morgan) is in fact a successful actor known most recently for his hilarious film Cop Out which some may remember? Perhaps you know the remake with Bruce Willis made shortly afterwards…You can presume by this entry that Wilfred shares his birthday with absolutely nobody of importance in this world. Other options were; Miranda Lambert, Diplo, Brittany Murphy (RIP & thank you for that 8Mile performance) & Big Pun – so you agree, I did my best here. 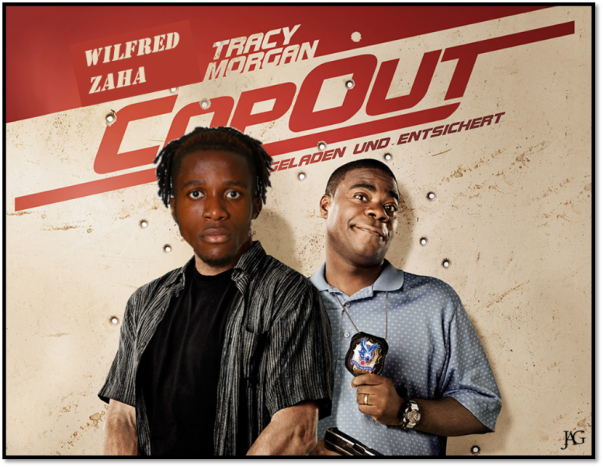 Finally, an easy one! (this theme is quickly irritating me). Son Heung-min was involved in both goals as Spurs beat Southampton 2-1. His birthday brother from another mother is Mr League MVP himself, Virgil Van Dijk. Just look at this rare photo I found of them both in action on the pitch celebrating together, it’s just lovely isn’t it? James May & Matt Doherty not only share the same birthday, they also once shared the same co-host as Matt stepped in for Richard Hammond this one time on Top Gear. Don’t believe me? Take a look at the absolutely believable photo that I found below. Anyway, Matt claimed MOTM on Saturday as his Wolves brushed aside Watford 2-0, scoring a goal in the process. Yes, Matt also shares a birthday with non-other than Nicklas Bendtner, but I didn’t want to lower Bendtner to Premier League level – he’s a football legend as we all know.

(Ed: You had the opportunity to do a full paragraph here on Bendtner…I’m not annoyed that you didn’t, just disappointed. Learn from these mistakes Jack) 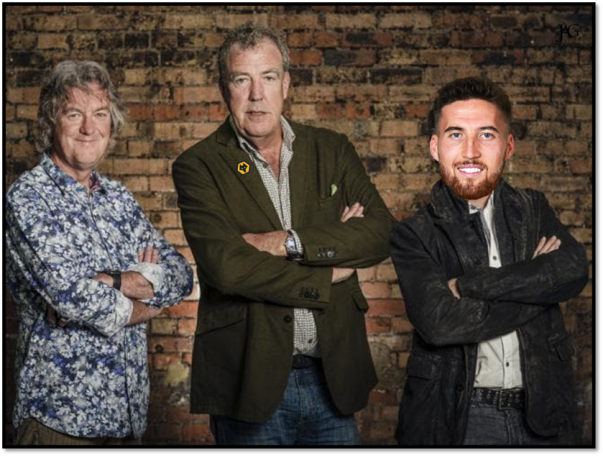 Absolute “bezzers”, Riyad Mahrez & Michael Mcintyre can be found most weeks gigging around the local comedy clubs as they tailor their double act for the upcoming 2020 comedy tour. They share the same birthday, the same favourite drink (Fanta lemon) and importantly the same glorious head of hair. Mahrez this past weekend earned his MOTM award somewhat out of nowhere as the Pep roulette landed on Riyad in the 3-1 win by City over Everton. 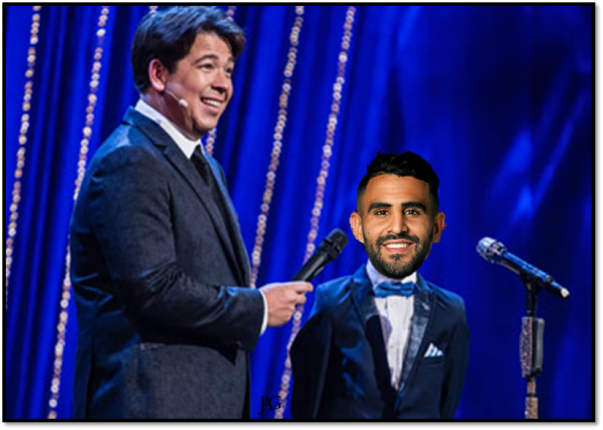 As best I can tell, Ndidi is a sort of weird budget N’golo Kante before one of the big teams drop silly money for him. He was simply unplayable in Leicester’s 5-0 rout of Newcastle on Sunday. Jane Austin, Ludwig van Beethoven, The Rock’s 3-year-old daughter…. needless to say, December 16th is a hella brilliant day to be born! Wilfred’s always been closest to his other birthday brother, Luke Harper, whom which he wrestles with during international breaks (his finishing move is called the Ndidi Drop, in case you wondered). 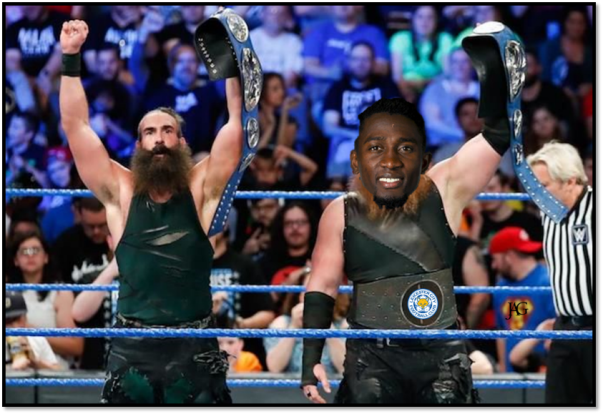 There were so, so, so, so many things that would have been a better use of my two hours of life on Monday night rather than watch United draw 1-1 with Arsenal. What used to be a fun goal fest with red cards, spitting and massive coats has turned into a depressing saga of who can get sacked first. Auba took the MOTM, not too sure why tbh with you – but here we are. Pierre shares a birthday with Sir Paul McCartney whom regularly brings Pierre up on stage whilst he’s gigging to duet – more often than not it’s Pierre’s all-time favourite song, Ob-La-Di, Ob-La-Da but he changes the words to Auba-Di, Auba-Da which is a nice touch. (if you haven’t heard this song, sort your life out, it’s a banger). Lastly, I want to take a moment to applaud Sudeep Nair whom is currently #1 in the Bang Average YIRMA league but crucially #140 in the WORLD! Top stuff Mr Nair. For those of you interested, Malcolm X still holds up the table in #9,984th place in the league and #6.8 millionth in the world – but, it’s a marathon not a sprint…

It’s been a rough one this week, hasn’t it? We got there though in the end. I fear for where my mind is taking these things – I understand if you’re having second thoughts Ryan! 😊 Only 31 more to go… (ED: I despair…)