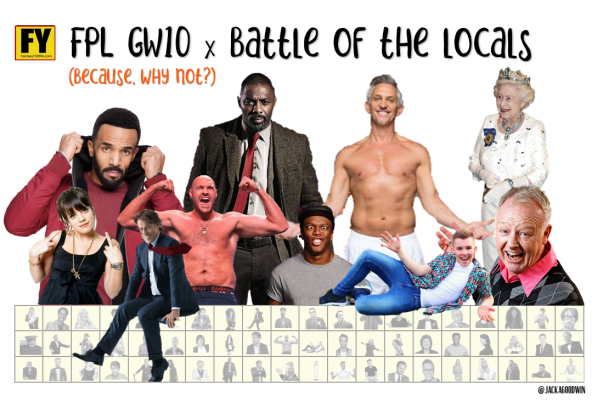 GW10…38 goals in 10 matches, some huge results and of course some absolute spanners got chucked at our FPL teams as per normal this season. Now of course you’re not here to read an actual review of GW10, you’ve had enough of that from the Twitterverse of FPL “experts” whom are way too serious, qualified and enthusiastic about bonus points and assists than I ever will be. Yes, you’re here for a completely random article which somehow tries to explain the past weekends results in a way you’ve never seen, perhaps never wanted to see before….

This week, it’s the battle of the local celebrities, as famous people from around the UK battle it out representing their local clubs.

Each team has 3 celebrities who were born in that respective city/town, joined together for absolutely no reason other than for a hilarious visual and write up…. what more do you want? Round One, fight!

Fitting really, Benny Hill music blared out of St Mary’s speakers for an entire 90 minutes as Leicester decimated them. Craig David & Matt Cardle sat there crying with their crumbling careers fading away as Gary Lineker ate Walkers crisps with Gok . YouTube FIFA sensation Reev literally watched as Leicester replicated a FIFA game against your mate you told you’d never played before but actually you’d been practicing hard just so you can batter him! 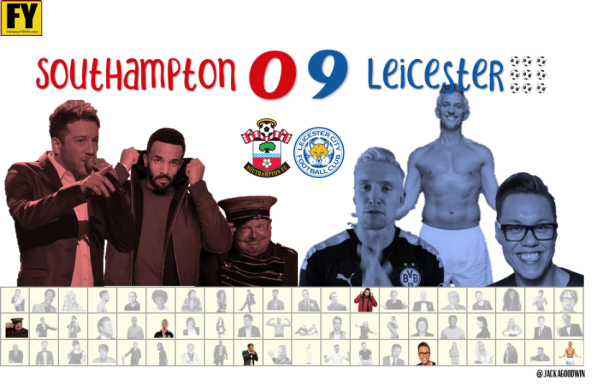 It’s unfair, just look. World Champion level elite boxers (and Amir Khan) against Miss Big Brother, a funny man TV presenter and Drake Maverick?! Yes, Willis could take down Khan with one swoosh of her razor-sharp fringe, but that’s not enough – she has no backup! Oliver just keeps ranting about how good Villa used to be in the 70’s and Drake hides perfectly behind the corner flags. An easy 3point victory for Fury and Co. as the Pep train rolls on to Southampton next (god help them…) 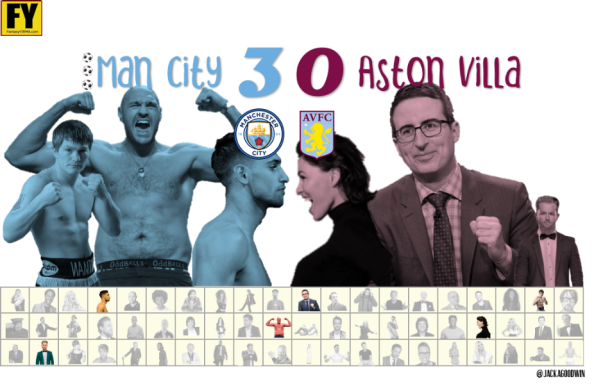 Holly & Katie never made it to the field as they couldn’t get in to their jerseys, but it was alright as Conor literally covered every position on the field – he covers everything! The match was destined for a draw until Craig got involved. Bloody Craig Charles! All he cared about was having a slightly funny-punny outro to the match (see – Robot Wars). Paul and Les were left confused the old sods, not knowing what was going on and which goal to score in! Paul found himself in times of trouble…

Result – Brighton take all 3 points after an extra time OWN GOAL! (3-2) 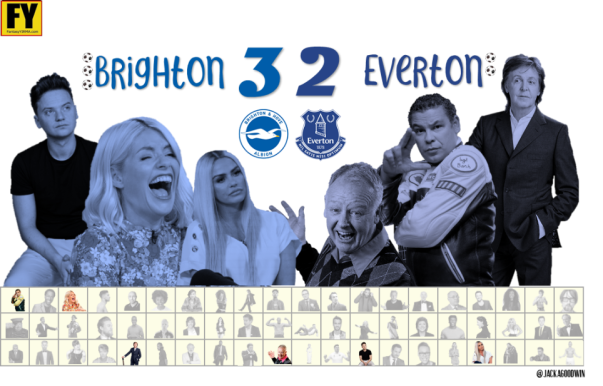 I swear to God I spent too much time looking into Bournemouth, literally nobody of any worth is from there…I found these three, these miss-match of random z-list people you’re fairly sure you’ve never seen before. Like Bournemouth, this was a boring encounter by two boring teams. Geri & Bradley kept trying to collab on a new Christmas album which nobody in the world wants to hear apart from your nan, whilst KSI just kept stopping to do push-ups and giggle about absolutely nothing funny. These two teams deserved the 0-0 result. Thoroughly.

Result – Everyone fell asleep mid-game out of boredom (0-0) 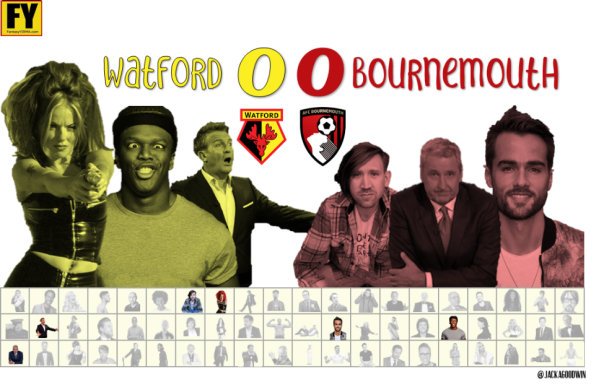 Dick, C*ck’ AND Bean! Did somebody say Dream Team?? Against most teams they would destroy, they’re a force to be reckoned with the Sheffield lads. But, this time they fall short. Idris Elba has been training for his rumoured James Bond call-up and we all know Danny Dyer is the baddest man on the planet (21 Savage keeps asking Jarvis Cocker for a rap battle which distracts the two of them for the majority of the match). Bean keeps waving around a sword and it all gets a bit too dangerous, so we end the match early and everyone goes home for dinner. 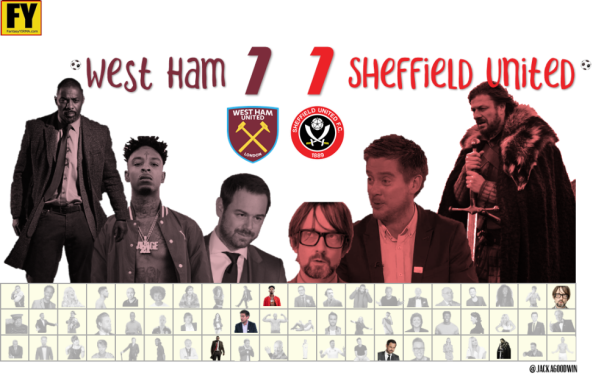 Are you really going to actively look to beat the Queen, the King of 90’s TV presenting & the Prince of the Opera? Thought not! Hence why Burnley drafted in local “hero” Malcolm who literally is only known as a silly little man from Coronation Street called Norris. James Anderson is still hungover from Cricket World Cup celebrations anyway – and Sir Ian can’t seem to stop fans chucking cutlery at him thinking he’s literally magnetic. A fun match, with plenty of goals to entertain the Queen. 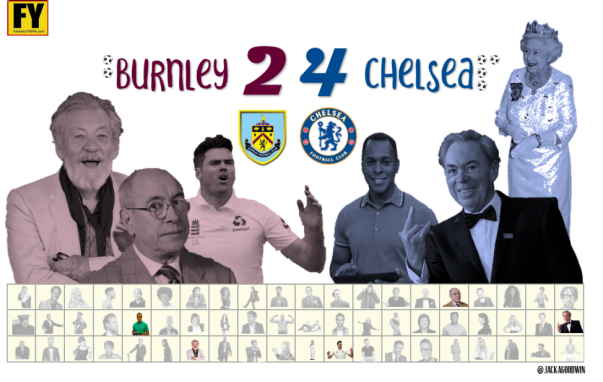 Nothing could separate this confusion of a bunch of celebrities. WillNE vlogged the entire match which was pretty distracting all whilst Charlie kept changing his accent every time he spoke, not once donning the Geordie tone. Dec, missing Ant on the day was in fact half the man we all though, jokes with no punchline and sentences with no full stops – he was a mess. Radzi kept getting mistaken for David Luiz but happily gave autographs to visually impaired fans, then Liam & Bev’ closed out the match with a note perfect rendition of Greatest Day (a mid-tier banger). 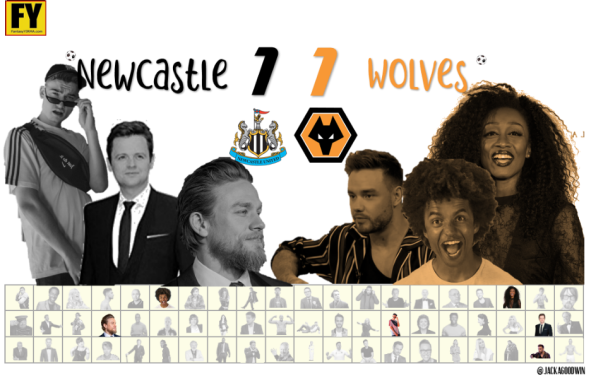 It was all going so smoothly for Arsenal as Trigger literally kept banging them in, 2-0 up within 10 minutes. Then the match turned sour. Swash kept egging Len on until Len open-palmed slapped the ginger out of Joe’s cheeks and pirouetted up the field for the comeback. Lily Allen was cocky as ever, flipping off everyone telling them to smile which again enraged the Palace team – this time Pixie with the close-fist punch direct to Lily’s left breast. Rocketman himself then grabbed the equaliser to further increase the pressure on the Gunners to grab results. 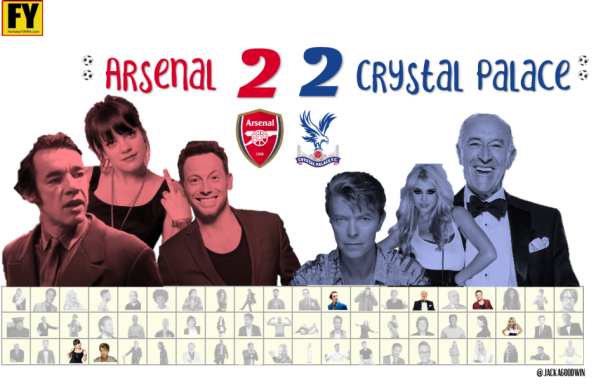 Adele thought she had a chance, pre-match given the team sheet and understanding that she’s teaming with 2 x Brit & MOBO award winners. She quickly learnt that these were nothing but one hit wonder kids and she knew her back was well against the wall in this one! Nobody could understand a word anybody was saying on the pitch, Adele talking at a much higher frequency than our puny human ears could compute, and Cilla Black & Bishop seemingly speaking another language and spitting all over the place. Liverpool took a late winner as Adele ran out of breathe from carrying her team, Clancy embracing all of the footballing knowledge that Crouchy had taught her over the years to put away a penalty.

Result – A fair result, the Liverpool train goes marching forward with the win (2-1) 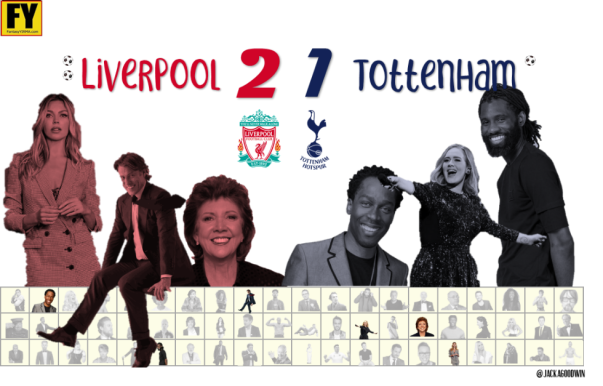 Norwich is packed to capacity with stars who absolultely love to film themselves in their normal lives! (2 x YouTubers & I’ll let you all Google Paige yourselves…). They’d heard that there was a party going on at Carrow Road for a good few weeks, but ultimately, they were a little late and the party had been cancelled so decided to sulk and not really try. Meanwhile, once legend Timmy Mallet showed glimpses of him former self besides Danny who still keeps the lights on in his house by telling everyone how successful he was in the early 2000’s. Pilkington was the MOTM in this one, the round-headed buffoon attacked the Norwich player ego’s endlessly telling them how rubbish they were and he was sick of them. This, in turn, killed all Norwich morale in its tracks. 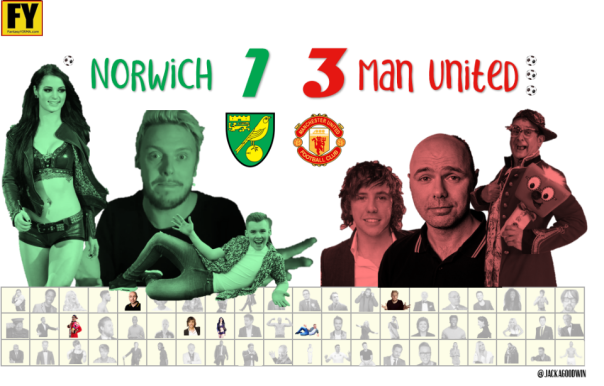